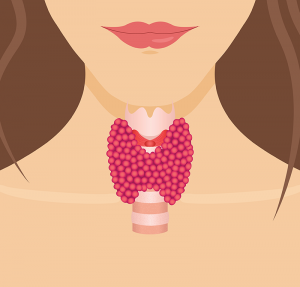 In the aftermath of two big storms — hurricanes Harvey and Irma — I’m inspired to write about a medical condition called a thyroid storm. The thyroid is butterfly-shaped gland that sits in the front of the neck. It produces several hormones, T3 and T4, which regulate metabolism.

Many people don’t realize that a lot can happen to the thyroid gland, and assume that all “thyroid conditions” cause people to feel tired, cold and gain weight. Those symptoms happen with hypothyroidism, an underactive thyroid that isn’t producing enough thyroid hormones. That’s is the most common thing to go awry with the thyroid gland.

Another name for thyroid storm is thyrotoxic crisis. It really is a crisis, fatal if untreated. Even when treated 8 to 25 percent of patients may die. This extreme form of hyperthyroidism affects almost every body system.

Hyperthyroid patients often feel too warm, are unable to tolerate heat and become sweaty. The patient in thyroid storm progresses to fever and elevated blood pressure.

The heart beats too rapidly, and abnormal rhythms ensue. The overworked heart muscle fatigues. The exhausted heart fails, causing shortness of breath and swollen feet and legs. Unable to compensate, the blood pressure now drops too low, sometimes to the point of shock.

Hyperthyroid patients are often restless and irritable. In thyroid storm those brain symptoms progress to agitation, confusion and delirium. Patients could even start having seizures or fall into a coma.

What turns hyperthyroidism into a thyroid storm?

It usually takes a stressor that stimulates the body to make too much adrenaline whose effects compound the influence of the excessive thyroid hormones. Examples include surgery, infection, treatment with radioactive iodine, direct trauma to the thyroid gland, failure to take medicines prescribed to treat hyperthyroidism, or taking too much thyroid hormone. This is just a partial list. There are even conditions that lead to thyroid storm in infants and children.

Fortunately, thyroid storm is treatable. Patients in thyroid storm need hospitalization in an ICU. There are medicines that block the thyroid’s production of thyroid hormone. Other medicines, such as a class of medicines called beta-blockers, target symptoms such as rapid heart beat. Other treatments include fluids, oxygen, measures to lower fever, and other supportive care.

Once recognized and treated, most patients improve within 24 hours and are out of the crisis with a week.

Risk factors for a poor outcome include age greater than 60 years, and confusion and mental changes. Although an overactive thyroid might need to be removed by surgery, patients will do poorly if not first treated with medication.