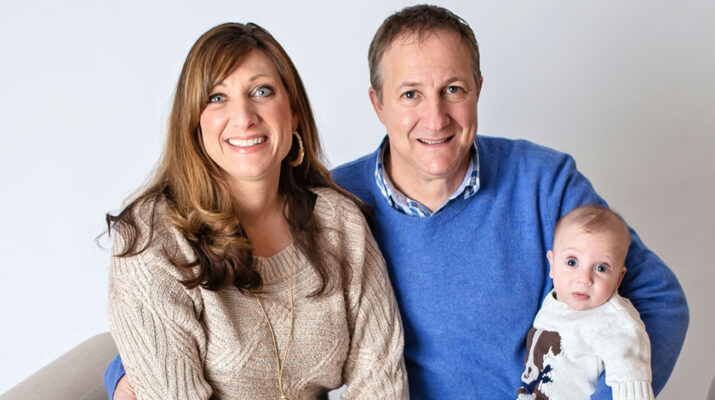 Many people dream of becoming a parent someday. Tiffany Latino-Gerlock of Clay had to wait until age 42 before seeing that dream come true.

Latino-Gerlock, a government relations and communications director for MACNY in Syracuse, wed at age 38. Her husband, Rich, is an operations manager for Cook’s Coffee in Syracuse.

“I probably would have liked to have had children earlier, but life happens,” Latino-Gerlock said. “I absolutely always thought I would be a mom.”

She has enjoyed spending time with children, including her niece and nephew. Latino-Gerlock’s twin sister had no problems becoming pregnant with her second child at age 40, so Latino-Gerlock hoped she would also readily become pregnant. After about three years, she sought fertility treatments at CNY Fertility and achieved a viable pregnancy.

“I suffered some pregnancy loss,” she said. “I was told it was most likely due to advanced age. There were some other fertility issues so we turned to a fertility specialist.”

Rich is 10 years older and has a son. Latino-Gerlock expressed thankfulness for his experience as a parent and his support through the years of waiting for their baby. Around Christmastime in 2019, she learned she was pregnant.

“It was wonderful,” Latino-Gerlock said. “I told my twin sister and parents and only they knew. I drank soda in my wine glass.”

The couple did not let anyone else know she was expecting until they passed the three-month mark when they felt that the greatest danger of a miscarriage had passed.

“I am a spiritual person; I did a lot of praying,” Latino-Gerlock said. “I had a lot of great family support. I kept being positive and doing things the doctor said, like eating healthy and doing yoga.”

While these are certainly good ideas, they do not guarantee a healthy pregnancy. Latino-Gerlock remained “cautiously optimistic” throughout her pregnancy.

The pandemic hit just as her three months of extreme morning sickness had passed. While she felt disappointed that she had to cancel her baby shower, Latino-Gerlock enjoyed the support of friends and family with a socially distanced, masked celebration of her baby.

She appreciates that her team of healthcare providers “treated me as a whole person” and not just a woman in her 40s.

Many providers refer to pregnant women who are age 35 and older as being of “advanced maternal age” or even “geriatric maternal age.”

Latino-Gerlock said that her providers did not treat her as only an age number.

“I received great care and I kept staying positive and hopeful,” Latino-Gerlock said.

Right away, she was monitored for high blood pressure. She also had severe preeclampsia. She received medical monitoring and bedrest at St. Joseph’s for a month. Fetal monitoring doctors met with them several times per week to keep a close watch on the baby.

He experienced jaundice — not unusual even for full-term infants — but few other issues. Like a typical preemie, Chase needed to learn how to coordinate sucking, swallowing and breathing before he could go home. He stayed in the neonatal intensive care unit (NICU) for a little more than three weeks.

Though younger women also experience preeclampsia, Latino-Gerlock said that it was possibly because of her age.

Also called toxemia, the condition affects more than 3 million American women annually. It can restrict baby’s growth, separate the placenta from the uterine wall, cause premature birth, and threaten the mother’s life as well. Though it has no cure, proper treatment can manage preeclampsia.

“I have heard of others where preeclampsia wasn’t caught,” Latino-Gerlock said. “Women should talk with their doctors and not hide anything. If you have swelling, you should talk about it.”

Swelling can be a sign of preeclampsia, as well as abdominal pain, headaches, dizziness, vomiting, changes in vision and reflexes, decreased urine output and shortness of breath.

Despite the number of candles on her last birthday cake, Latino-Gerlock said that she does not feel like she is 42.

“I’d probably have more energy if I had a baby younger in life. But I’ve been dreaming about having him so long. I’m now well established in life. I have a good work-family balance now. I have been able to work at home and Chase is with me.

“I’m blessed and lucky to be in the current situation I’m in. I’m very focused. I’m very prepared for him.”

While she encourages couples who want children to not wait too long, she also does not want women in their 30s and 40s to give up hope.

“Women are having babies much later than they used to,” she said. “I had to try a little harder and overcome some obstacles. It can be done easily. There are a lot of women with success stories and there are a lot of great doctors.

“I know some women have chosen to freeze their eggs. There are various options, like IVF, for women who haven’t conceived when they wanted to. I want to let women know they can do it. They shouldn’t consider themselves ‘older.’ If they’re in their 40s, it’s not as big a deal as others might think.”

When the weather was nice, she enjoyed taking Chase out for stroller rides. Now settled in for winter, she has been cooking more, playing and reading a lot with Chase, and watching movies with her husband.

“When you have a dream and it comes true it’s a total blessing,” Latino-Gerlock said. “Despite the challenges, it was all worth it, and we couldn’t be happier.”

Photo: Tiffany Latino-Gerlock, her husband Rich and their new baby, Chase. “Having a baby at 42 makes me feel even younger,” she says. Photos courtesy of Rebecca Milner Photography.