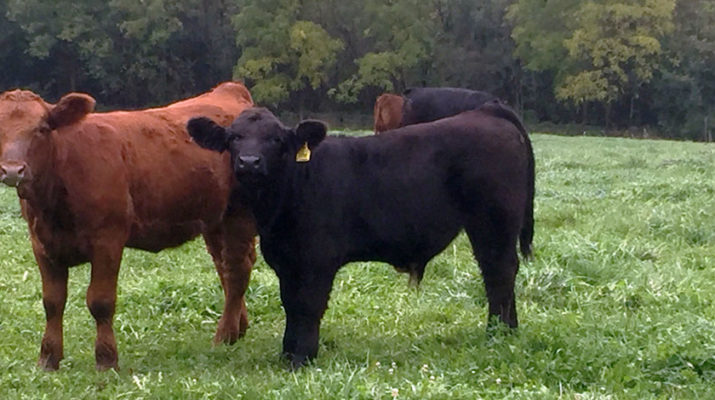 Bottleneck responsible for recent shortage of milk, meat at the grocery stores

During the peak of COVID-19 panic buying, many stores’ supply of milk, meat and produce dwindled. Meanwhile, dairy farmers dumped milk and other farms experienced surpluses of their own. The paradox left many consumers scratching their heads — and some feeling ire toward farmers.

Why don’t stores have enough while farmers have too much?

The answer lies in unprecedented bottlenecks in the food supply chain.

“It is a confusing time for a consumer to go into a grocery store and see an empty shelf and farmers are on TV having to dispose of their milk,” said Steve Ammerman New York Farm Bureau public affairs manager. “It doesn’t have anything to do with the farm side of things but the distribution methods.”

It’s illegal for dairies to sell raw milk directly to the public, so consumers can’t simply drive to a nearby dairy to fill a pitcher. The only exception is farms licensed to sell raw milk; however, only a handful of producers statewide possess the hard-to-obtain license.

The cost of building a licensed bottling facility is too high for any dairy still reeling from four years of prices below the cost of production. Farms with creameries must also market and distribute their milk, enterprises for which farmers may not be prepared.

Farms without their own bottling facilities sell to cooperatives throughout the state. The milk cooperatives decide how much they need for the processing plants, where milk is pasteurized, homogenized and bottled. Ammerman said that because milk normally headed for the food service industry — institutions and restaurants — wasn’t needed during quarantine, farmers had a surplus.

“Those plants are designed for those types of customers and couldn’t easily pivot and change their processing and package to sell to the grocery store,” Ammerman said. “In turn, there wasn’t a place for all the milk to go and some farmers were directed by their milk cooperative or the plants that they couldn’t pick up the milk.”

Since most farms cannot store, process or bottle their milk, they were often forced to dispose of it at a loss.

While many school districts still offered school lunches for those in need, the number of children receiving a school lunch was lower than those who would normally eat lunch at school. Colleges also sent home resident students. Though restaurants could still operate through take-out, diners didn’t need beverages, as they had those at home. All chefs needed was the milk necessary for cooking.

All of these factors reduced demand for farms supplying these industries. Rerouting that milk to stores may seem like an easy way to keep supplies high — after all, students are someplace drinking milk — but infrastructure complicated the possible solution. Store coolers are designed for quarts, half gallons and gallons, not the students’ pints and the food service industry’s bulk containers.

“There are so many variables that have to fall into line like packaging, storage and transportation,” Ammerman said.

Panic buying contributed to a dearth of milk. It may seem sensible that stores could order more cartons and jugs of milk once a shortage seemed imminent; however, stores may not have sufficient storage space for it.

Struggles for producers and consumers

Julie Patterson, the sixth generation on Patterson Dairy Farms in Auburn, said that many people don’t understand that farm operators can’t just reduce supply in response to shifts in the market.

“They keep on giving milk whether we have a place to send it or not,” she said.

The 1,600-cow farm works 2,500 acres. Patterson’s milk goes to Cayuga Marketing, a Aurelius-based cooperative that processes milk and also provides services to yogurt makers Chobani and Fage. Though finding a use for their milk during the crisis hasn’t been a problem, declining milk prices have been.

Meat shortages existed largely because of temporary shut-downs of meat processing plants and transportation issues, not a lack of cows, chickens and pigs. Tapping local farms may seem an easy way to get some meat; however, farmers selling off the farm must sell only whole, halved and quartered animals. A quarter of a beef steer costs around $700 and would supply a family of four with beef for a year. Many families lack freezer space for that much meat or else they must arrange to pool their money with other families and divide the meat they purchase together.

The only legal way for farms to sell smaller amounts to a single buyer — such as just a few packages of ground chuck and a couple ribeye steaks — is to have the meat processed by a USDA-certified processor.

“In New York state, we don’t have major slaughterhouses,” Ammerman said. “A lot of our beef and dairy cows go to Pennsylvania [for slaughter and processing].”

Ammerman said that he has heard anecdotes of meat processors both in New York and outside the state as being booked. Despite consumer demand, they have reached capacity.

Erin Hull, director of communications and crisis management of the New York Animal Agriculture Coalition, is the owner and operator of Lucky 13 Beef in Tully, where he raises red Angus beef cattle.

“The issue is not that there aren’t animals available or beef available,” Hull said. “The processor is where the hold-up is.”

She explained that many of the larger processors closed because of the pandemic; however, a presidential executive order has enabled them to open. While they play catch-up, consumers have sought local suppliers. Hull’s farm has sold out beef halves and quarters until January 2021. It takes 12 months to raise a steer to the right size to butcher.

“Be patient and seek out a local farmer if you can,” Hull said.

Despite the struggles for producers and consumers, Rick Naczi, CEO of American Dairy Association, said that he sees a few positives by the COVID shake-up to the food supply chain. Though some stores instituted limits to ensure each customer obtained milk, he feels encouraged by the consumer interest in buying milk.

“When people were panic buying, retail sales went up 45%,” he said. “The channel wasn’t ready for that level of buying. It was an imbalance for what that product was made for. Now, we’re buying 15% more dairy products at retail. People are eating at home more.”

Universal home education created opportunities for dairy farmers to generate more interest in farm tour videos so children learn about how milk is made.

Naczi said that the dairy industry needs to reevaluate the supply system, though “you can’t have the infrastructure in place for every possible emergency. I think you’ll see more flexibility in plants to change how they work.”

He has also felt heartened by dairy farmers’ donations, such as Dairy Farmers of America giving away 8,000 gallons of milk at Destiny USA April 22, and many other organizations donating to food banks.

“People have to have faith in our food system that farmers are still working hard,” Ammerman said. “It’s a supply system still trying to settle and maneuver to adjust to the reality.

“Even though farmers have to go through a lot right now, many are donating to food banks. That’s been very positive and comforting to see, but it’s not a surprise. Farmers jump in and help their neighbors.”

Why Some Products Vanished from the Shelves

Mona Golub, vice president of public relations and consumer services for Price Chopper, said that the statewide chain had experienced a few categories of food that ran low during the early part of the pandemic, such as canned vegetables, dried pasta, baking supplies and canned soup; however, that was likely because of panic buying and also because of unanticipated shifts in the market and weather.

“Soup generally falls off by the time we get to March,” she said. “When kids are home more, more meals are made at home and the weather stays cool, then soup is popular.”

The surge in baking — typically a popular activity during the fall and winter — also abruptly lowered supplies in that aisle as consumers quarantined at home wanted homemade treats and familiar rituals.

“We’ve been resourceful relative to maintaining the food supply, calling upon a vast network of distribution and tapping into the food service supply chain,” Golub said.

For example, purchasing bulk meat that would have gone into the restaurant market and repackaging it in consumer-friendly sizes enabled Price Chopper to keep up its stock closer to normal levels.

As of mid-May, Golub said that Price Chopper’s stock still wasn’t at 100% of what it normally carries, but Golub said part of the reason is that manufacturers are focused on making more of their core products.