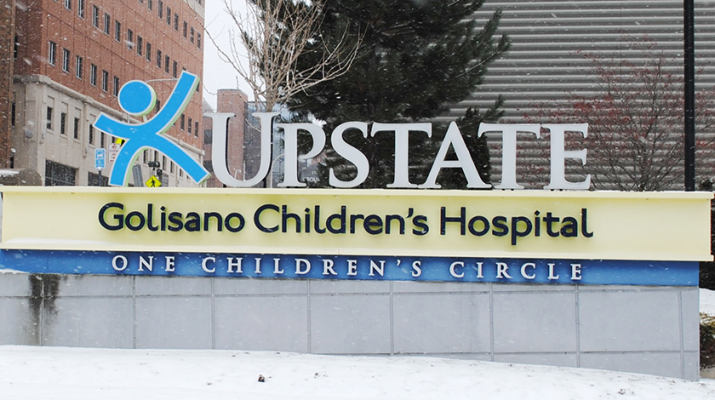 Physician Gregory P. Conners is now chairman of the department of pediatrics at Upstate Medical University and serves as executive director of Upstate Golisano Children’s Hospital.

He succeeds Ann Botash, who had been interim chairwoman since last May.

Conners had been associate chairman of pediatrics at Children’s Mercy Hospital, University of Missouri-Kansas City School of Medicine, in Kansas City, Mo.

During a recent telephone interview, he shared his thoughts on his new position, and as a native of the Rochester area, he discussed what he looks forward to on his move to the Central New York area.

As chairman of pediatrics at Golisano, Conners is responsible for a variety of aspects of that program, including the provision of health care for children; the pediatrics residency program; a faculty that numbers several dozen members; and research.

The three big missions of an academic children’s hospital are health care, education and research, he said.

“Then there’s a fourth that I like to pay attention to, and that’s to be a good partner with the community,” he said. “If I can get those four things done well, I’ll be successful.”

He praised the management and administration of the Golisano facility.

“I’m starting with something really good and trying to make it even better,” he said.

One of the missions he’s been tasked with by Dean Julio Licinio, senior vice president for academic health affairs and dean of Upstate Medical University’s College of Medicine, is to grow the research component of the department of pediatrics.

Conners said he wants to recruit someone with solid research leadership to coach and mentor others in that field.

In addition, he wants to work with staff to help them realize the “hidden research,” as he calls it, in what they’re already doing.

While some may think labs and test tubes when discussing research, Conners looks at it differently.

Hospital staff “take good care of patients and they learn how to take care of them in exceptional ways that maybe other folks haven’t figured out,” he explained. “I’ve had experience in helping people who thought they were just clinicians actually develop a more scholarly aspect of their work. I’m glad to be bringing that to Upstate.”

Licinio said he was pleased Conners will be returning to Upstate New York to lead the department of pediatrics and Upstate Golisano Children’s Hospital.

“With the appointment of Dr. Conners, we are gaining an outstanding physician-scientist, collaborative leader and champion of quality,” Licinio said.

Some of Conners’ accomplishments at Children’s Mercy Hospital occurred while leading a division that grew significantly.

Hospital staff attends to 115,000 pediatric emergency visits per year in its Missouri and Kansas emergency departments, as well as educates a wide variety of trainees and conducts substantial research and advocacy.

Often urgent care comes under emergency, Conners said, but at Children’s Mercy, staff was able to expand it to the point where it became its own division.

Over his nine-plus years there, the number of nurse practitioners between emergency and urgent care has grown from six to 52, enabling them to expand their capabilities.

As a native of Pittsford, a suburb of Rochester, and a former faculty member at the University of Rochester for 15 years, Conners looks forward to returning to the area, where he still has a lot of family.

He and his wife Jan have a daughter, Libby, who lives in Rochester, and triplets, Margaret, Jackson and Luke, who are all in college. His parents and two brothers still live in this region.

Winter weather, however, did not draw him back home.

He said while he didn’t come for the snow and ice, he especially enjoys the summer and autumns here.

Conners has been a member of the editorial boards of three peer-reviewed, professional journals. He has authored or co-authored about 100 papers, as well as 17 book chapters and a peer-reviewed book.

Conners earned his bachelor’s degree at Amherst College in Massachusetts (1983) and his medical degree from SUNY Stony Brook (1989).

He also holds a Master of Public Health degree (1998) and a Master of Business Administration degree (2003), from the University of Rochester. He did his residency in pediatrics and a fellowship in pediatric emergency medicine at Children’s National Medical Center, Washington, D.C.

His numerous honors and awards, include the 2013 SUNY Stony Brook School of Medicine’s distinguished alumnus award. He also has appeared on numerous “best doctors” lists, including America’s Top Pediatricians by the Consumers’ Research Council of America.