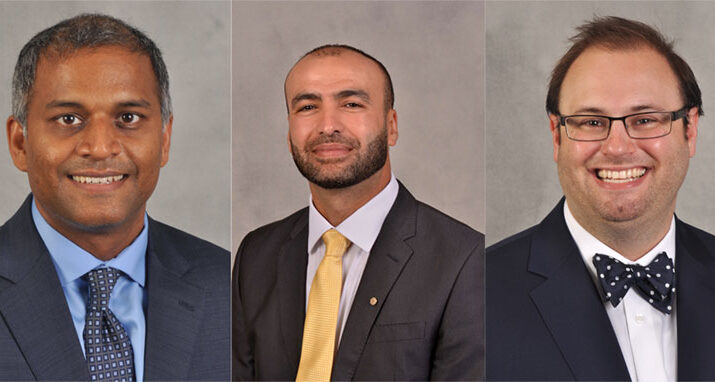 Upstate Medical University has expanded its neurosurgery department with the hiring of three new surgeons, allowing Upstate to offer additional and expanded services to a larger region of New York state.

The expansion of the department by nearly a third — from 10 to 13 doctors — will allow Upstate to provide neurosurgical care to a wider portion of New York state, said Interim Department Chairman Satish Krishnamurthy, MD.

Upstate now has the largest neurosurgical team in Central New York, according to the hospital.

“Upstate’s department of neurosurgery has been serving the region for more than 60 years,” Krishnamurthy said. “We are dedicated to the Upstate Medical University mission to improve the health of the communities we serve through education, biomedical research and patient care. The addition of these three specialist neurosurgeons will enable us to provide excellent patient care to more patients in more specialty areas.”

The new surgeons are:

• Harish Babu, who joins Upstate after completing residency from the department of neurosurgery at Cedars-Sinai Medical Center in Los Angeles. Following residency training, he completed fellowships first in epilepsy/functional neurosurgery at the University of Toronto in Canada, followed by tumor/skull base neurosurgery fellowship at the Center for Minimally Invasive Neurosurgery, Prince of Wales Hospital, Sydney in Australia. Babu obtained his neuroscience PhD from Charite Medical University in Germany. Babu’s specializations at Upstate will include adult brain tumors, skull-base tumors and gamma knife; functional (epilepsy), general and spinal surgeries.

• Ali Hazama, who has been a resident in the department of neurosurgery at Upstate since 2013. Hazama is a graduate of Chicago Medical School, Rosalind Franklin University of Medicine and Science. Hazama’s specialties at Upstate will include general, spine and minimally invasive spine surgery. He will practice at Upstate Community Hospital and the downtown campus.

• Timothy M. Beutler, who completed a residency in neurological surgery at Upstate Medical University, which began in 2013 and included a fellowship in Neuro Critical Care (CAST Program) from 2017 to 2018. Beutler is a graduate of Case Western Reserve University in Cleveland, Ohio. Beutler’s specialties at Upstate will include critical care, general and spine. He is Upstate’s first neurosurgeon dedicated to critical care neurosurgery.

The department of neurosurgery multispecialty group offers advanced care and technologies as well as basic, translational and clinical research aimed at finding new treatments and improved strategies for disorders of the brain and spine. The department plays a central role in the following Upstate facilities: the region’s only adult and pediatric Level-1 trauma center, a dedicated Cancer Center, the Upstate Golisano Children’s Hospital, neonatal care units, the region’s first Comprehensive Stroke Center and the region’s Telestroke Network, supporting stroke care at 11 hospitals across Upstate and Central New York.