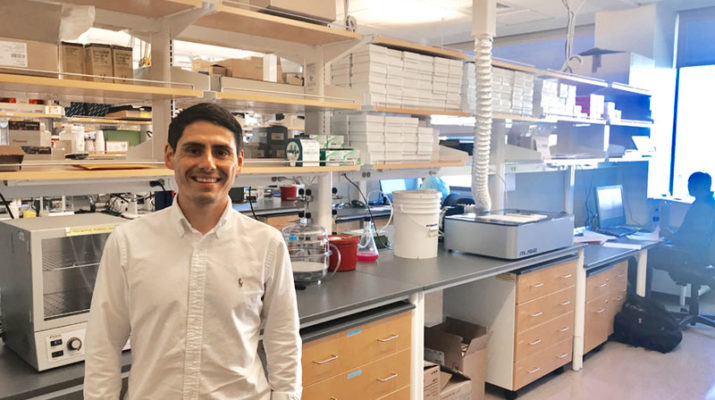 Samuel A. Herberg, PhD, assistant professor of ophthalmology, cell and developmental biology, and biochemistry and molecular biology, has been awarded a $300,000 Research to Prevent Blindness (RPB) Career Development Award.

The grant comes during a year in which two of Herberg’s papers from his Ruth L. Kirschstein National Research Service Award-supported postdoctoral work in bone tissue engineering at Case Western Reserve University from 2014-2017 were published in key scientific journals.

The RPB grant is a big win for Herberg. The Career Development Award is designed to attract young basic scientists to eye research. Others at Upstate who have received the funding are among the top names in vision research internationally, including Eduardo Solessio, PhD; Michael E. Zuber, PhD; Andrea Viczian, PhD; Peter Calvert, PhD; Reyna I. Martinez-DeLuna, PhD.

“I am very grateful to receive this grant and grateful for the support of the department,” said Herberg, who is eager to bring his expertise and research prowess to ocular disease.

Herberg’s goal is to build a three-dimensional model of the trabecular meshwork in his lab that would simulate the composition and architecture of the native tissue, allowing him to investigate the cellular behavior and tissue remodeling behavior as well as to test the effect of pharmacological agents or cellular therapies to restore function of the meshwork. In these efforts, Herberg collaborates with researchers at Duke University, Syracuse University, SUNY Downstate Medical Center, and Wake Forest School of Medicine.

Herberg was appointed to the Upstate faculty last August. In addition to his post at Case Western Reserve University, he also served as a senior research fellow at Wake Forest School of Medicine. He earned his doctorate from Augusta University (formerly Medical College of Georgia) and his undergraduate degree from the University of Applied Sciences, Darmstadt, Germany.