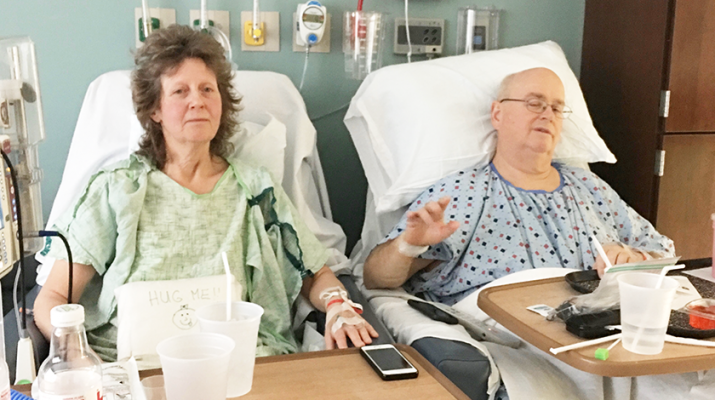 Oswego County man gets new kidney — from his wife

It was a conversation the Paquettes hoped they would never have. In June of 2017, the couple sat down with a team of doctors at Strong Memorial Hospital to discuss their options for a kidney transplant. Jeff’s only kidney was diseased, and he was in need of a replacement.

As they were talking about the process of putting Jeff on the waiting list and how long it could take to find a match, his wife Marlene volunteered hers.

“We hadn’t even discussed it,” Marlene said. “I just knew that I was going to try.”

Offering her kidney turned out to be the easy part, Marlene says, the difficulty was what followed. Marlene had to go through a series of tests, including bloodwork and scans, to ensure she was in good health. She was. Then, there were more tests to ensure the two were a match. They were. And then she had to stay completely healthy leading up to the procedure. Even a cold could postpone it indefinitely, which was easier said than done for an operation that was scheduled in February.

Marlene says it may have just been a coincidence that she and Jeff were a match, but she believes it was much more.

“I just think I had it in me that we would,” She said. “They ask you many times why are you doing this. And I just said I always thought there was another reason we were together, deep down. There’s a reason that we met. Maybe this was meant for me to be his donor down the road.”

Marlene says she was not surprised they were a match, but Jeff was that she even offered to begin with.

“I couldn’t believe she wanted to donate to me,” Jeff said. “I was very humbled and emotional at the time to think she would do that for me.”

Fortunately, the operation, which took place in February, was successful and Jeff’s body has thus far not rejected the new kidney. But Marlene says the work is not finished.

Both have regular checkups and must stay on top of their potassium intake, as well as drink at least three liters of water a day. It’s little sacrifice, Marlene says, for her husband of 36 years.

To honor her selflessness, Jeff nominated his wife for the New York State Senate’s Women of Distinction Award.

“I felt she deserved to be recognized,” Jeff said. “There aren’t many people who are living donors. She is a hero for that in my book.”

In addition to that award, Marlene won a New York State Gift of Life Medal of Honor. Marlene says she appreciates the recognition, but that’s not why she did it. Love pushed her, she says, despite the many opportunities she was given to opt out.

“You can literally back out up until the time they knock you out,” Marlene said. “And they said, ‘Are you sure you want to do this?’ And I said ‘Yep, I’m ready let’s go.’ My sister looked at me and said, ‘I can’t believe how calm you are.’ I go, ‘I’m not really calm, I’m just ready. We’ve been talking about this and now the day is here, let’s do it.’”

The kidney transplant changed the Paquettes’ lives in more than one way. It took their relationship to a whole other level, as Marlene puts it.

The couple has since become advocates for those in need of organ donations, and those who have gone through the process. Jeff shares his experiences and tips online with people who are about to undergo the operation. And the two recently participated in the Rochester River Run, a 5K walk/run event to raise awareness and funds for those who await, undergo and recover from transplant surgery.