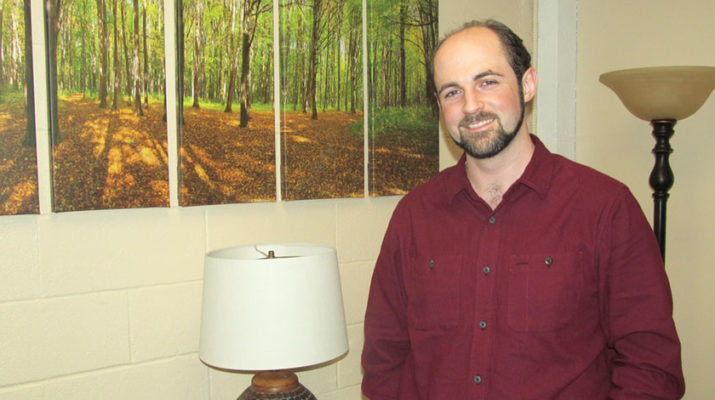 Christopher Battles is embarking on a professional counseling career while striving to build awareness regarding Oswego County’s troubling behavioral and mental health problems.

That is the mission of the Oswego native who is the owner of Equanimity Counseling, a private practice located at the Business Expansion Center, 185 E. Seneca St., Oswego. He works with adults and teenagers who are battling through issues such as anxiety, depression and post-traumatic stress disorder.

According to a recent community health needs assessment, the county is ranked 60th out of the 62 counties in New York state for health behaviors.

For example, the county’s suicide rate is about 15.6 per 100,000, compared to 8.0 statewide. Compounding the situation is rampant opioid abuse.

While the greatest health care need in the Oswego community has been identified as mental health, the most significant health issue facing the community is a lack of doctors and specialists.

In addition, health care services are not readily available for mental and behavioral health, according to data from HealtheConnections.

The word equanimity means sustaining the calmest mind state through the toughest of times, and Battles wants to spread some of this mindfulness to those in need in Oswego County.

Battles said licensed mental health counselors like himself fill the divide between intensive inpatient care, which in Oswego County typically comes in the form of inpatient drug rehabilitation programs and halfway houses or adult respites, and treating people so they can be contributing members of society.

Speaking to Oswego County’s needs, Battles said, “Our local mental health and social needs outweigh the resources available. Specifically, if the goal is a stable home and work life for Oswego County residents, then there is a critical lack of transitional care between inpatient services and establishing healthy daily living.”

He cites basic legislation could immediately recruit LMHCs who are ready to fill the service void.

Although LMHCs actually receive more clinical training hours than those holding other licenses, New York state law does not require Medicaid-Medicare to reimburse LMHCs for mental health services. “This is a senseless barrier in service provisions for folks,” he said.

He describes the paradox: “Folks are on Medicaid-Medicare programs for help with their needs, but the programs won’t reimburse LMHCs. “Further, the obstacle is a scope-of-practice definition that prevents counselors from serving large parts of the population.”

Battles said the economic hardship of becoming an LMHC further exacerbates the shortfall in services the area sees.

“Every counselor has a story about how they made it through their unpaid internship and low-pay permit years before getting licensed. It’s four to five years from the start of grad school to an LMHC, the majority of this time without pay,” he said.

The road toward becoming an LMHC was not without its obstacles for Battles.

“I substitute taught and lived off the generosity of others. And about three years into it, I saw tens of thousands of dollars in loan forgiveness dissolve before my eyes when the program parameters changed, leaving me with massive student loan debt,” he said.

“Every LMHC has his or her own story, whether it involves being a dependent or just getting any job anywhere doing anything, because the path is really difficult,” he said.

“Legislation, licensing, and loans add up to fewer helping professionals and six-month-long waiting lists for counseling services,” he said.

Battles said new legislation concerning LMHCs would address the deficit of outpatient services by attracting counselors and making it easier for practices like his to sponsor interns and permit holders through to their licensure.

“There is a gap in the path to whole psychological and social wellness, period. For those making the leap from inpatient care to returning to school or the workforce, there are specific barriers that integrated care that involves LMHCs can help,” he noted.

“Service falls short for our fellow Oswego County residents who cannot return to work. There are cold nights in their homes right now because of inadequate integrated care and case management, and professionals available to provide quality services,” he said.

Battles said society needs to continue addressing the “not in my back yard” stigma about mental health care, which drives it further from helping out those in need.

His mission statement revolves around the idea of demystifying counseling and empowering folks to find their inner compass, such as their values and virtues.

Photo: Christopher Battles is the owner of Equanimity Counseling, a private practice in Oswego. He works with adults and teenagers who are battling through issues such as anxiety, depression and post-traumatic stress disorder.