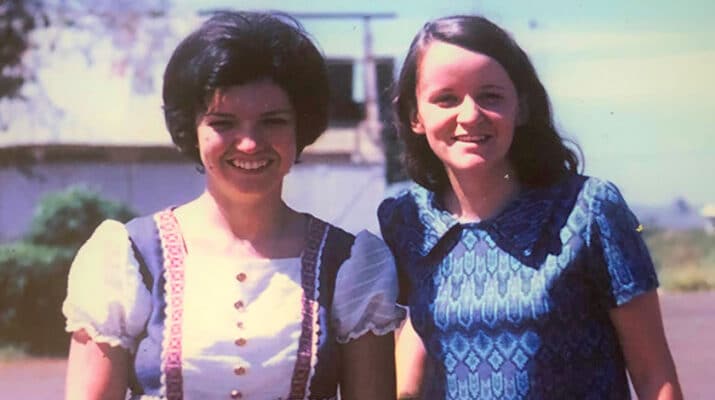 Amyloidosis is a rare disease that affects 12 people per million. Rochester now has a program dedicated to the treating the disease and finding a cure for it

Among the most impactful memories I have of my mother is from around Halloween when I was maybe 6 years old. She was driving the two of us home from a trip to the store when we came upon a car crash.

This was in the late ‘80s — before the age of cell phones — so, we arrived at the crash scene before first responders. I remember the commotion outside the car window as my mother pulled over to the side of the road. The worried faces around the damaged vehicles scared me, so I asked her not to get out of the car.

Considering the potential injuries at the scene of the wreck, my mother told me she had to. “I’m a nurse,” she said.

I don’t remember the details of the crash beyond that, but what stands out about that moment was my mother’s commitment to helping even those she didn’t know.

In January 2019, my mother, Linda Curtis – a nurse both in practice and in spirit – died after a battle with a rare disease called amyloidosis.

Amyloidosis is a group of different diseases that is caused when an abnormal protein, called amyloid, is produced by the body and attaches to tissue and organs, interfering with their normal function.

My mother was 75 when she comfortably died inside her home in Ontario, Wayne County, where she raised her three children. She was surrounded by family — including her closest friend, Carol Steckel — when she took her final breath.

Steckel knew my mother more than anyone. The two met in college and attended the same nursing school in the late ‘60s. They ended up reunited in a war-ravaged Vietnam in the early ‘70s, where they traveled for missionary worfk as nurses. They helped design and manage a health clinic in the city of Da Lat, where they assisted the South Vietnamese as well as the indigenous population with their medical needs.

“She loved it,” Steckel said about my mother. “She thrived on it.”

The threats of war were all around them. Steckel said fellow missionaries were captured by Viet Cong, others murdered. My mother’s brush with death occurred when she contracted black water fever, a complication from malaria. With death a real possibility from the illness, she was airlifted to a hospital in Saigon.

“When the nurse and the physician came in to check on her, the physician said, ‘Black water fever. That’s a one-way street,’” Steckel said.

Steckel recalls later asking my mother what she thought when she heard the doctor’s grim prognosis.

My mother showed the same resilience in her battle with AL amyloidosis, or amyloid light-chain amyloidosis — the most common form of amyloidosis in the U.S.

Physician Frank Passero, a hematologist at the University of Rochester Medical Center, explains light chains are pieces of antibodies made by plasma cells in bone marrow. For those suffering from AL amyloidosis, the plasma cells make too many light chains which misfold and bind together to form amyloid fibrils. The fibrils then attach to organs, suppressing their function.

Signs of the disease were first detected in my mother’s kidneys in March 2016, and later in her heart, thickening its chamber walls and restricting blood flow. In late 2017, the disease started to impact her gastrointestinal tract, which Steckel described as “the final blow.”

My mother received chemotherapy to treat the disease until July 2017, at which point they focused on providing comfort care. Steckel recalls one of my mother’s doctors later saying he didn’t think she would survive beyond six months when he saw my mother’s condition.

“She proved them all wrong,” Steckel said.

“I think she lived by her determination,” she added. “She just wanted to be around as much as she could for her children and grandchildren.”

Steckel points out that she and my mother were not familiar with amyloidosis when she received the diagnosis.

Amyloidosis is classified as a rare disease by various health organizations.

Mary O’Donnell, president of the Amyloidosis Foundation, shares a statistic that suggests there are approximately 12 cases per million persons, per year diagnosed with AL amyloidosis.

“Most people when told they have amyloidosis never heard of the word before,” said O’Donnell, who started the foundation after her now deceased husband was diagnosed with the disease in 2002. “It’s just not something that an everyday general practitioner will begin to think of.”

According to hematologist Passero, because of its rarity, patients with amyloidosis have an unmet need. This provided the motivation for Passero, along with physician Himabindu Vidula, to start the University of Rochester Medical Center’s Comprehensive Amyloidosis Program.

“It’s not uncommon that patients are diagnosed years after it has first emerged,” said Vidula, a cardiologist at the hospital. “It’s also not that uncommon for patients to see multiple specialists before someone comes up with the diagnosis. That’s why we started this program. We wanted to be able to better diagnose patients and be able to treat different aspects of patients in a more collaborative manner.”

Passero stressed the importance of early detection, as the longer a person has amyloidosis without treatment, the greater its impact on the body.

Considering my mother’s roughly three years in Vietnam during the war, I was interested to learn about the Institute of Medicine’s 2007 report, titled “Veterans and Agent Orange: Update 1996.” The report states there is limited suggestive evidence of an association between exposures to the compounds found in the herbicide Agent Orange and AL amyloidosis.

Agent Orange is an herbicide used by the U.S. military as part of its chemical warfare program during the Vietnam War.

According to Department of Veterans Affairs website, because of this potential link, Vietnam veterans who develop AL amyloidosis and were exposed to Agent Orange or other herbicides do not have to prove a connection between their disease and service to be eligible to receive VA health care and disability compensation.

It’s an interesting link to consider when thinking about my mother’s illness, but one I think she would agree didn’t matter in her case. A war-torn Vietnam was where she wanted to be regardless of the dangers. It was a place where she could help those who needed her the most.

“There were long days and sometimes long nights,” Steckel said. “But she loved where she was. She loved what she was doing. It’s where her heart was.”

Photo: A photo of Carol Steckel, left, and Linda Curtis, taken in 1972 when Curtis first arrived in South Vietnam. Steckel and Curtis carried out missionary work as nurses in the war-torn country. In January 2019, at the age of 75, Curtis died after a battle with AL amyloidosis.