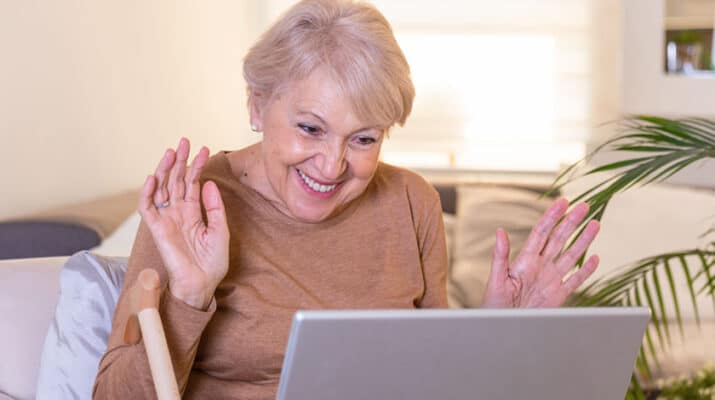 Numerous studies and articles have lambasted misuse of social media for its ill effects on young people caught up in bullying, obsessive posting and dissatisfaction with their own lives compared with the “perfect” lives portrayed on the screen.

However, in the past year, social media has proven particularly helpful for the opposite end of the age spectrum as older adults have continued to stay at home to avoid COVID-19.

Whether it’s virtually attending a birthday party, chatting with grandchildren or catching up with their adult children on Facebook, technology has helped many seniors avoid feeling left out.

These kinds of measures to enhance connection are vital to good mental health, according to Timothy Holahan, osteopathic doctor and assistant professor of medicine specializing in geriatrics and palliative care with University of Rochester Medical Center.

“Socialization has always been important in nursing homes and not isolating patients,” he said. “I still think that’s very important. We just have to find good ways in terms of infection control to do that.”

He believes that the pandemic has underscored how important socialization is to populations that are already somewhat isolated, including seniors living in long-term care facilities, assisted living communities and independently in the community.

Holahan is also medical director for The Hurlbut, Penfield Place and Woodside Manor. He said that at the homes he oversees, HIPAA-complaint means such as Zoom or streaming events, music and pastoral care have proven popular among residents.

“It doesn’t replace the in-person experience, but it makes it better than not having it,” he said. “They definitely get benefit out of it.”

But using this technology can also produce unwanted effects. For example, it can leave some older adults at risk for scammers.

In a nursing home, staff are trained to help residents deal with these issues. Older adults living independently may not be aware that anything they post may be used by a scammer. The phone call scams asking for money have been enhanced by information gleaned from Facebook and other social media platforms. Criminals can more easily pose as stranded grandchildren needing money if they know the family’s background.

“Scam artists will use a ‘hook’ to trick individuals into offering information,” DiCaprio-Lee said. “Scammers will prey on an older adults’ feelings of love, goodwill and fear. Many times they’re hesitant to reach out for help. If you think about phishing, they’re reaching out and trying to get you to give up information.”

A scammer who calls saying, “Grandma, I need help” in the middle of the night often elicits as a response, “Billy? Is that you?”

Usually, the scammer creates an emergency that requires the senior to wire money right away and pleads with the grandparent to not tell their parents or “I’ll get in trouble.” Knowing details from Facebook can make the scam sound more legitimate.

DiCaprio-Lee said that anyone receiving a dubious phone call should “not give out personal information unless you absolutely know who you’re dealing with,” DiCaprio-Lee said.