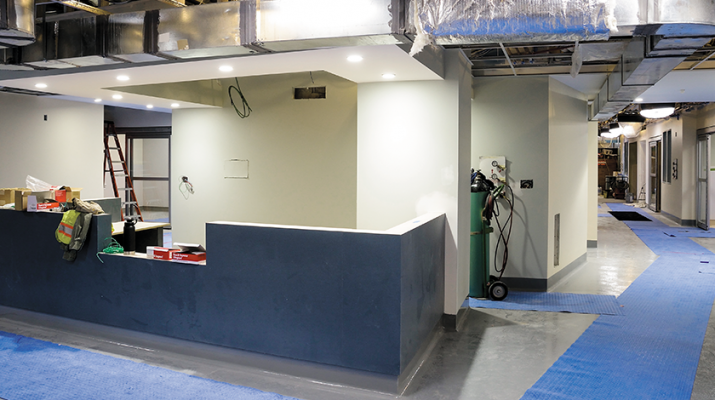 It has been years in the making, but Crouse’s new Pomeroy Emergency Services Department is about to be open and it is creating excitement.

“This is tremendous,” said physician David Mason, chief of the new department. “In terms of the give-and-take that we had I think we designed it really well. It’s going to be such a huge upgrade from what we have now. It’s really going to be awesome.”

Crouse’s emergency department was built in 1974. It was due for some updating, but officials didn’t rush things, they said. They took as much time as was needed to try to get things right and bring Syracuse its latest 21st century ED.

“What goes into it?” Mason mused. “Lots of blood, sweat and tears. Basically lots of research.”

The heads of the new department worked with all other departments connected to the ED to get their input. They also worked with an architect firm to get the most out of the space they had to work with.

“[We] tried to take the best things we could from what other people had done, learn from their struggles,” Mason said, “It’s been probably three to four years at the design level, planning the last two. It was about two years of weekly meetings getting down to the nitty gritty.”

The hard work resulted in a 30-room ED. That includes 29 private rooms along with one semi-private room. The upgrade is a substantial one over the old department that had only a few private rooms, but used multiple bays as well as hallways to house patients.

“Basically the same amount of stretchers; it’s just taking care of patients in the way that they want to be taken care of,” Mason said. “There’s a huge gain in that. People don’t particularly want to be in the hall when they’re not feeling well.”

Crouse’s new ED will include all new medical equipment, according to Mason. The new rooms will improve patient flow because procedures can be done quicker. Much of Crouse’s improvements over the last few years, even before construction, has had to do with improving patient flow and cutting the time to see a provider.

“We changed our model and put a physician in triage for 12 hours a day,” Mason said. “In 2011 we started with that model. That brought our door to provider time down from 75 minutes into the mid 20-minute range, which is a huge change. We got the provider to see the patient much, much quicker. A couple years after that, we looked at a rapid evaluation model. That’s what we designed our new ED on. Instead of a one bed, or two-room triage intake area, you have a whole intake unit. The providers and nurses ideally see the patient at the same time. We try to get everyone in at the same time and tag team as best we can. Our door-to-doctor time came down more with that model. We saw gains in our throughput times of getting people home sooner with the same level of care.”

As of the writing of this story, Crouse’s door-to-doctor time was in the low 20 minutes. It’s door-to-discharge time for the main ED was 184 minutes.

Crouse officials hope to shave those times even further. The ED is monitored for its times and some of its reimbursement is based on them, Mason said.

The ED is moving from 8,000 square feet of space to 20,000-plus square feet. Although this is a vast improvement, designers were still limited by the available area. The long and numerous meetings to prepare for the new ED allowed those involved to make the most of the space.

“We, unfortunately, had lots of physical constraints because the shelf space was already built. It wasn’t like we had a blank slate. It did make the project more challenging. We fought for every square inch of medical space we could get. We want to be able to give as much patient care as efficiently as possible,” said Mason.

In the spirit of maximizing space, the ED will have all valet parking in the future. The old ED space will be converted for additional uses by 2018.

Mason said Crouse focuses most on emergencies related to heart attacks and neuroscience, like strokes.

It does have a prompt care unit, however, which specializes in low-severity emergencies. That does 40 percent of the volume and the door-to-discharge time is 95 minutes.

A short stay in the ED may beat over-nighting at the hospital for the patient, but it does offer more of a challenge to the staff. Crouse’s new emergency department will have two nurses and a tech caring for every six patients and two providers caring for every 15 patients.

As the 21st century progresses, Mason said he is happy that Crouse will have a modern emergency department to meet patient’s needs.

“I’ve been here now seven years,” he said. “It’s been a running joke that it was promised five years ago. The fact that we’re a month from opening the doors is amazing. It’s coming down to weeks now as opposed to next year or months from now. The excitement is there.”