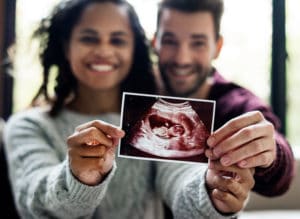 Back when my kids were born — and I know I’m dating myself here — having an ultrasound of your baby wasn’t routine. Most people didn’t even have one ultrasound during pregnancy. If one was ordered by their physician, it was usually for a specific reason, not as a routine thing.

Now that more is known about the technology and its use, most women get several ultrasounds during pregnancy.

As  explained by Center for Vascular Medicine, the first is in the first trimester to confirm the due date. Usually there’s a second ultrasound at approximately 18 to 22 weeks to evaluate for normal anatomy and the baby’s sex. (My daughter expresses horror at the thought that I had no idea whether I was having a girl or a boy until she was born. “How,” she asked with incredulity, “did you know how to decorate my nursery?!”)

Now a whole commercial business has grown up offering “keepsake” ultrasounds. Parents are willing to pay for photos and videos of their babies that look more lifelike than the 2-D ultrasounds offered at their doctor’s office.

But there are several reasons to be wary.

First, a quick explanation. 2-D ultrasounds are the type that are most usually done by medical professionals during pregnancy. Those show a cross-sectional view of the developing baby. Although there can be a wealth of information for the trained provider, they may be confusing to the average parent.

A 3-D ultrasound pieces together images taken from various angles to form a three-dimensional image. This creates a picture that looks more like a typical photograph. 4-D adds motion, so that you can see the baby moving and kicking.

Why don’t medical professionals use 3-D and 4-D ultrasound routinely?

Second, ultrasound waves create heat. There isn’t any evidence that the small amount of heat generated by a 2-D ultrasound harms an unborn child. But it’s not known for sure whether prolonged exposure to ultrasound used by a commercial enterprise could be harmful. Medical professionals prefer to limit unnecessary exposure. They are trained to minimize the amount of time your baby is exposed to ultrasound, and to use the lowest power settings on the machine.

If they see something that looks abnormal, they may not be trained to provide you with information, support or follow-up. Commercial ultrasound can also offer false reassurance. An untrained ultrasonographer might not notice abnormalities with the baby, placenta or umbilical cord.

That’s what recently happened to a relative. She had a commercial ultrasound and was told that the baby was normal; a medical ultrasound less than two weeks later showed serious fetal abnormalities that weren’t recognized.

So, if you decide to pay for an ultrasound at a commercial establishment in order to obtain a keepsake 3-D picture of your baby, don’t skimp on your visits to your OB-GYN doctor and recommended medical ultrasounds.