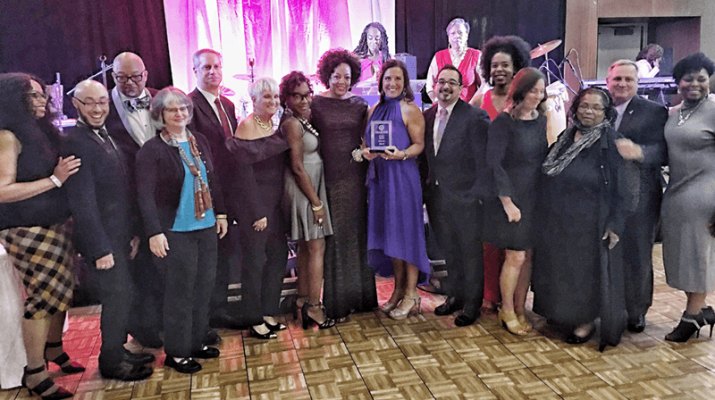 Crouse Health was awarded the Earl G. Graves Corporate Award from the Syracuse/Onondaga County Chapter of the NAACP at its recent 40th anniversary Freedom Fund celebration.

The award was presented by Linda Brown-Robinson, president of the Syracuse/Onondaga County chapter.

“This important community recognition affirms our strong commitment to advancing and nurturing a culture that supports diversity and inclusion at all levels of our organization,” said Crouse Health president and CEO Kimberly Boynton.

In 2014, with senior leadership support, Crouse Health formed an employee-led diversity and inclusion committee and began to have conversations around the topic of diversity and inclusion. Recognizing that Crouse Health is a locally-governed community asset that serves people from all socio-economic and ethnic backgrounds, it became clear to Crouse leadership that the organization could do a better job of paying closer attention to how it maximizes each employees’ unique talents, background and potential. Crouse also made a commitment to ensuring that it is continually recruiting and retaining a diverse workforce, one that mirrors the diversity not only of those the health system serves, but of the entire community.

“We feel that our commitment to diversity and inclusion, while still in its infancy, represents a key differentiator for Crouse Health in our community. In fact, the work we have done, and the early progress we have made — as recognized by the NAACP — has become an integral part of the Crouse culture, which extends not only to our employees house wide, but to our patients and visitors as well,” added Boynton.

To support its work and commitment to this initiative, Crouse hired Twiggy Eure in 2016 as director of diversity and inclusion to oversee system-wide corporate diversity and inclusion initiatives. Since 2016 the hospital has made solid progress, both internally and in the community, where its commitment to diversity and inclusion is being noticed by business and community leaders. Crouse has taken the lead on an initiative called Diversifying the Hill, which encourages the sharing of best practices among businesses and organizations on the University Hill. Further reflecting Crouse’s strategic focus on this initiative is the fact that over 3,000 employees have participated in D&I education and information sharing sessions over the past two years.