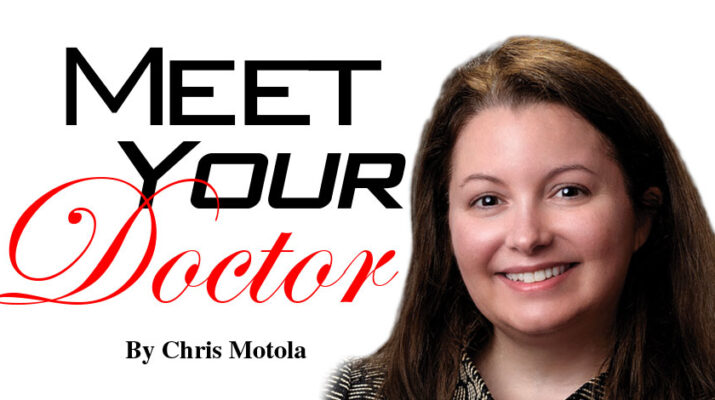 Features Meet Your Doctor Top Features
May 31, 2021
Posted By: admin

From Alaska to Syracuse: New inpatient psychiatrist at St. Joe’s talks about COVID-19 and mental health. ‘I think people are really struggling,’ she says

Q: So you’ve worked in Alaska, Portland and now Syracuse. Why do you hate warm, sunny weather?

A: I love how you worded that. I’ve actually also worked in North Carolina and Colorado.

Q: Here’s a more serious version of the question. In northern climates with less sunlight, do you see more seasonal affective disorder?

A: Oftentimes we’ll recommend lightboxes first thing in the morning for people with seasonal affective disorder to help people adapt. In Alaska there are long periods without sunlight, so those are pretty popular up there. Exposing yourself to sunlight first thing in the morning was often very effective. If the depression is very severe we might go to medication, but often the boxes were very helpful.

Q: The past year could almost have been designed in a laboratory to test people’s mental health, from the pandemic, to the lockdowns, to the economy, to losing loved ones. What does the psychiatric health of the population look like this year compared to others?

A: I think people are really struggling. Their routines have been lost, people have lost loved ones, and they’ve been socially isolated. So we’re seeing people who haven’t struggled before now facing oftentimes their first depressive episode. It really is quite different than we’ve seen in the past. I know a lot of families are dealing with children who are struggling because they’ve been out of school and haven’t been able to develop their normal social skills. And we’re seeing a lot of elderly people who are also struggling. So I think the need for mental health services is greater than ever before.

A: There’s a lot of depression, alcohol and substance abuse, anxiety, panic attacks, suicide attempts. All of that has come to the forefront.

Q: Do people seem to be aware of what the problem is, a lack of stable routine and social interactions, or do they more associate it with something else?

A: I think people were able to hold on initially for a couple months. Now I hope things are now getting better, but for a long time that uncertainty of when will things get better, what’s safe for me to do, wanting to do the right thing but not really knowing what that is, all of that really put people in a bind. And then with the country as it was, people were struggling. There was a lot of butting of heads. People were listening and getting a lot of different information. They felt stuck, I think.

Q: Do you think the mental health impacts of these events are getting enough attention?

A: I think there are so many things to talk about right now that it’s hard to say if one thing should get more attention than another. I think there are so many different things, getting treated for all the medical care they’ve put aside for the year, which people are catching up with. Certainly, with mental health, we’re seeing a lot of people get admitted who have never been admitted before. People with overdoses, people who have developed alcohol or substance abuse disorders. I do think it’s a very pressing need.

Q: As far as your own practice goes, I imagine you used to see patients in person more often? Or even just maintaining social distance?

A: Well, here I see everyone in the hospital so it hasn’t really affected my practice here. When I was in Alaska, we started to see everyone via telemedicine. That only worked for so long. A lot of my patients didn’t have access to video conferencing or it just didn’t work for them. They were too acutely ill. So, we had to bring them in. There was really no other way. My main role here is as a consult liaison psychiatrist. I work with people who are hospitalized in the medical unit and interact with other specialties to identify how I can help patients who are having psychiatric issues along with their other medical issues. So working as part of an integrative team is something I really enjoy doing.

Q: What are some of the differences geographically, in the types of issues you encounter?

A: In Alaska you essentially make do with what you have. It would not be unusual, when I worked in Juneau, which is a city of about 30,000 people, to fly in patients from Fairbanks. They’d be acutely mentally ill, often psychotic, and put on a commercial airline flying down through Anchorage with a guard to be taken to our in-patient psychiatric unit. That would not be unusual because that’s simply the best we could do with available resources. We also didn’t have a lot of the care that you guys have here and being able to refer people to all of these community agencies that are here. So that’s actually a relief to me. It’s one of the reasons I decided to come here.

Q: For people who can’t access their regular support systems, what do you recommend, especially if they’re trying to maintain social distance?

A: The more routines you can put into place, the better. Getting up at the same time each day. Going to bed at the same time. Getting outside into the light, into the fresh air, finding something to do while respecting social distancing. Reaching out to people, whether online or on the phone. There are a lot of good apps online if you can’t access a therapist. You can go to mobile.va.gov. There are a lot of high-quality apps there for psychotherapy. Also accessing a crisis line if you really need hope. There are also a lot of good agencies that are available on a walk-in basis.

Q: What do you say to people who might be despairing that this is the new normal, that it’s never going to end?

A: You kind of try to take it back. Look at where we were two years ago versus a year ago, versus now. Instead of worrying about next month or next year and all the things we can’t control focusing on the things we can. Because a lot has changed. There are vaccines you can get, that most people should get. That alone alleviates a lot of the stress and fear of being around people.

Career: Board-certified psychiatrist with more than 17 years of clinical experience, including stints at Bartlett Regional Hospital in Juneau, Alaska, and supervising roles at Oregon State Hospital in Salem and Kaiser Permanente Northwest in Portland