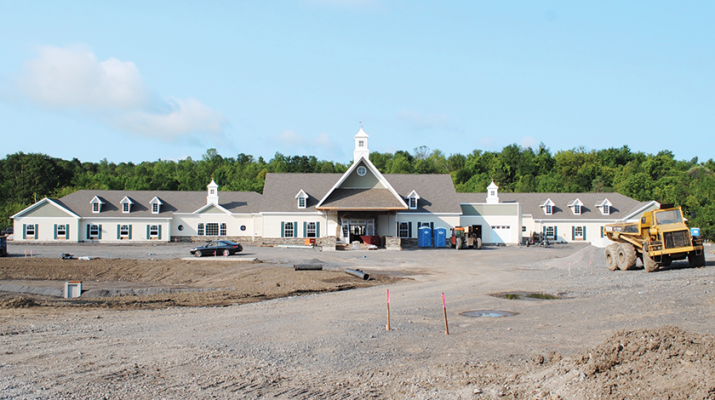 What were just fields and brush along an area of West Seneca Turnpike a few months ago has been transformed. Now, standing on this parcel of land in the town of Onondaga, near Onondaga Community College, is the framework of what will be the newest memory care facility in Central New York — Peregrine Senior Living at Onondaga Hill.

According to executive director Robert Collins, it is an assisted living community dedicated to caring for individuals with Alzheimer’s and other dementias. It has been designated by New York state as an enhanced and special needs community, the only facility with this kind of license in Central New York, according to Collins.

Peregrine officials broke ground for the facility in October, 2016, and they anticipate that the $8-million, 36,000-square-foot facility will open in December. The Peregrine company, based in Syracuse, is owned by Stephen Bowman and Mark Farchione, with 14 facilities throughout the country, including Atlanta, Colorado and Massachusetts, and New York state, where most of their properties are.

Collins provided a recent tour of the building. The covered entrance, topped with a large cupola, will open to a vestibule and administrative offices, followed by a great room and a 1950s-themed diner, a central courtyard, and a chapel. Off the center of the building will be wings that will house dining areas, along with 60 private and four semi-private rooms, for a total of 68 beds. The semi-private rooms will allow for a patient and his or her spouse. The building will provide lots of natural light and walking areas with numerous gardens and sitting areas. Because many of those with Alzheimer’s have a tendency to wander, these particular spaces will be designed to be a destination for them, Collins explained. At night each wing will be secured for the well-being of the residents, but during the day, they can freely amble throughout the entire complex.

While the residents can keep their own private physician, Collins said, Peregrine will be contracting with a physician’s office, and Collins is also planning to bring podiatry, dentistry and physical therapy services to the facility.

“The idea is we bring services here,” he said, “We bring everything here so people don’t have to go anywhere else.” In addition, the medical team on site will include a registered nurse, LPNs and aides. He estimates that the staff will number approximately 65 full-time employees.

But the staff’s focus is not solely on the patient, but on their families and caregivers, as well.

“One of the things that we really do that I think is very important is we embrace the whole family,” he said. “Helping people work with the disease is what we do too; working with the families on how to have a good visit with your loved one, how to deal with the issues,” Collins said.

Oftentimes, Collins explained, when family members step in as caregivers, they tend to lose sense of being that person’s husband, wife, son or daughter. It’s an experience he knows first-hand, since he, himself, was a caregiver for his mother, who battled dementia. Peregrine Onondaga will take over the responsibilities of a caregiver, allowing the patient’s family members to remain in the role of the spouse or the child.

Collins got his master’s in health care administration from the George Washington University and did his residency in long-term care. Following that, he did a stint in acute care to get some experience. It was, he said with a chuckle, supposed to be brief but it lasted 25 years. He has been with Peregrine for 12 years and has been on the road at a number of their facilities for all that time. But as executive director of Peregrine Onondaga Hill, Collins returns to his hometown of Syracuse. Living in the same neighborhood where he was raised, he can make the commute to work in less than five minutes.

And now he’s in charge of making a home for 68 Alzheimer’s patients at Peregrine, and he plans on making it a happy home for them. “While life dramatically changes, it doesn’t end.”