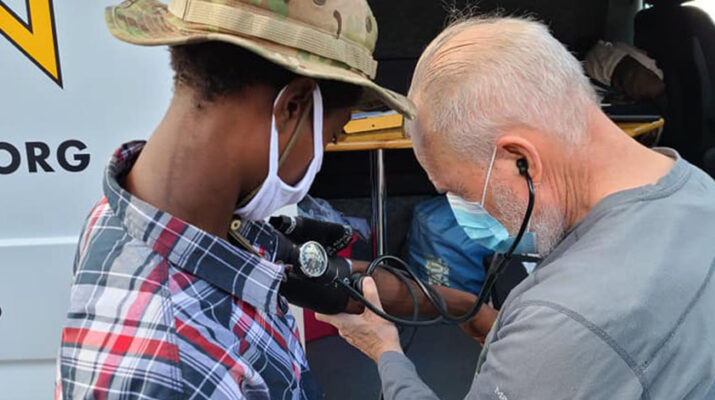 Most doctors today don’t make regular house calls; it’s been decades since patients traded the convenience of a home visit for the formality of the doctor’s office waiting room with its bland décor and outdated magazines.

But physician David Lehmann is an outlier; he has no waiting room and every patient he sees amounts to a house call whether he treats them on a street corner, under a bridge or in the back of a van.

Lehmann and Mia Ruiz-Salvador operate a program through Upstate Medical University called HouseCalls for the Homeless. The goal is to provide direct medical care to homeless individuals throughout Onondaga County by meeting them where they are on the streets. The program is one of a growing number of street medicine initiatives across the country.

By all accounts the program has been successful at providing medical care to a vulnerable and often difficult to treat population.

HouseCalls for the Homeless works with a variety of organizations and programs to provide medical care to the homeless, wherever they are. They routinely go out on the street with outreach workers and make periodic visits to shelters. Lehmann also volunteers at several free clinics in Syracuse and brings medical students with him to learn and help out.

“I think the success is based on collaboration, on how well the collaboration efforts work well together,” said Ruiz-Salvador, the program coordinator for HouseCalls for the Homeless.

For such a program to succeed, she said, buy-in and support are necessary from the constellation of government agencies and nonprofits that play a role in serving the homeless, from the city and county to hospitals and the organizations that run homeless shelters and do outreach work.

The program might never have happened if Lehmann hadn’t made a simple observation and decided to do something about it. Lehmann joined the faculty of Upstate in 1994 as an internist and clinical pharmacologist. In addition to teaching, he sees patients. In 2013, he switched primarily to inpatient work, seeing patients at the hospital and emergency room.

He soon noticed that homeless individuals accounted for a fraction of his total patients, but tended to make repeated trips to the ER. Under normal circumstances, a patient with issues such as uncontrolled high blood pressure, breathing problems or a skin infection would go to their doctor to receive care and medication long before it snowballed into an emergency.

But by the time Lehmann was seeing them at the ER, they had gone untreated so long that their conditions were often severe enough for them to be admitted, sometimes requiring lengthy hospital stays to recover. About 75% of homeless patients had insurance through Medicaid, but the cost of hospitalization was much higher than treating the condition when it appeared and the quality of life for the patient was far worse.

Lehmann knew that the constant trips to the ER and hospital stays could be reduced and quality of life improved if homeless patients received medical care sooner.

Case managers from human service agencies had plenty of experience meeting the homeless on the streets and connecting them to needed services. They could sign them up for Medicaid, connect them with mental health and substance abuse services, and begin the process of finding housing. When it came to medical care, however, Lehmann said he realized there was a disconnect in how services were provided for people living on the street.

“They were trying to fit these guys into an existing health infrastructure of the clinic,” Lehmann said. “Go to the doctor’s office and sit in the waiting room for an hour.”

Homeless individuals usually don’t have a doctor or transportation, Lehmann noted. And the environment can make it extremely difficult for them to 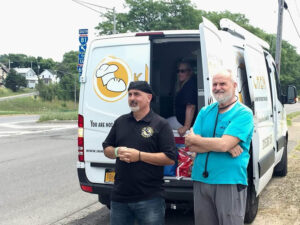 receive care. For example, someone struggling with mental illness might be unable to handle the anxiety associated with sitting in a crowded waiting room. And a drug addict is unlikely to wait an hour to be seen.

Patients in need of medication would receive something to tide them over short-term, but often ended up back in the ER because they had no doctor to prescribe them medication long-term.
“It’s just a completely unworkable sort of situation,” Lehmann said.

The problem angered Lehmann to the point that he decided to do something. He and Ruiz-Salvador put their heads together and worked with Upstate to find a solution. The result was HouseCalls for the Homeless. In 2018, Lehmann opted to stop seeing patients at the hospital and devote most of his time outside teaching to street medicine.

It was there that he met John Tumino.
“I basically would have been cold-calling these guys walking around on the street,” Lehmann said. “And John already had a very robust sort of relationship with the street homeless folks.” 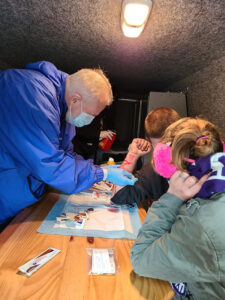 Tumino, a former chef and restaurateur, founded In My Father’s Kitchen a decade ago to provide street outreach. He was sitting in the same meetings with Lehmann, the county and other nonprofits trying to decide how best to get medical care to people on the streets.

“We were in a meeting one day and nothing was transpiring,” Tumino said. “After the meeting I said ‘Doc, I’m already going out, why don’t you just come out with me, bring your bag, let’s just go try it.’”

Things clicked and Lehmann began riding along when Tumino did outreach. Although they had different backgrounds, both men shared a faith component that helped fuel their work. To Tumino, who is also a minister, they weren’t doing work.

Lehmann grew up in a suburb of St. Louis and, after pharmacy school and residency, decided to join the Order of St. Camillus, a religious order in the Catholic Church. He spent three years as a brother, including a year in Kenya running the pharmacy at a remote bush hospital. He met his future wife while in Kenya and later left the order and went to medical school.

During his initial outings with Tumino, Lehmann carried a bag with a stethoscope, blood pressure cuff and other medical equipment. He also brought along things like wound care supplies. The inpatient pharmacy at Upstate provided a prefilled box with medications such as painkillers, antibiotics, inhalers and blood pressure pills.

Lehmann rides shotgun as Tumino winds his way around in a van, making stops at locations he knows homeless individuals congregate.

During a typical outing Tumino might visit an average of 15 people, handing out food and supplies. Of those, Lehmann might meet three people in need of medical attention. He usually treats them where they are. There’s also a table and bench available in the outreach van.

He comes across a variety of people on the streets, though most of his patients are men between 20 and 30 years old. He sees a lot of chronic conditions; even homeless patients in their 30s tend to have conditions typically associated with older people.

The work is pretty straightforward for Lehmann, who refers to most of what he does as “bread and butter medicine.” He has gone on post-disaster relief trips to Haiti and Ecuador in the past and said those experiences proved helpful when treating patients on the streets.

When he sees a homeless patient Lehmann will do an assessment and decide what care is needed. Skin infections, often caused by drug use, are common. He spends a good deal of time draining abscesses and fighting infections. He stitches up cuts, provides foot care and handles any other ailments a patient might have. When possible, he follows up a day or two later.

If a patient needs medication he’ll usually provide it on the spot even if he plans to write them a prescription for the pharmacy. Since so many of his patients are also dealing with addiction or mental illness, they typically want immediate help with their medical issues, Lehmann said. So, he’s found it helpful to have medication on hand so he can start treating them immediately. 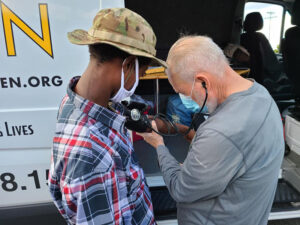 During the pandemic he has spent time providing COVID-19 tests and vaccinations. He’s also helped patients who had COVID-19, but didn’t require hospitalization or who were being quarantined at hotels by Social Services. For those quarantining, he has provided medications and made follow-up visits to check on them.

Lehmann has experienced very little pushback to the help he provides. That may be due in part to the program’s collaboration with organizations that already have relationships with the homeless.
“There’s not a stigma to the medical guy out there seeing them. They want you especially if they know you have treatment at arm’s length,” Lehmann said. “I don’t have that sort of resistance that in some ways the psychiatric providers do.”

Tumino said when he and Lehmann began working together he recognized Lehmann was eager to help the homeless, but also that there would be a learning curve working with that population.
“I think the thing for him was learning to get out of that clinical mindset,” Tumino said.

It takes more than simply meeting the homeless where they are. It takes time to learn how to work with nontraditional patients such as the homeless, Tumino said, especially in the case of people dealing with addiction or mental illness. He said Lehmann has become skilled at providing the best care possible to his patients under challenging circumstances, often repeating the phrase “Don’t let perfect be the enemy of good.”

“He’s always about thinking outside the box and finding ways to get them care,” Tumino said. “Are we doing perfect work, perfect medicine? No. But it’s good work.”

Lehmann recalls a patient who was suffering from severe schizophrenia and had lost both his feet. He was staying at a shelter, but case managers got him housed. The man developed a significant infection in one of his legs and had a growing abscess that needed to be drained.

Lehmann started the man on antibiotics and referred him to the wound clinic. But when the nurse took him in, the man acted up, refused to wear a mask and got kicked out, Lehmann said. With the likelihood that the condition would worsen if left untreated, Lehmann reluctantly opted to treat the man at home as best he could, draining the abscess and trying to fight the infection.
“The frustrations that I have is trying to get them linked into the system because it’s kind of like a round peg square hole,” Lehmann said. “This guy is a round peg; the square hole is the office-based wound clinic and they’re just not going to fit. At some point you can only do so much.”

Among the challenges of street medicine is the knowledge that the longer a person remains homeless, the more likely they are to die. Lehmann points to a statistic from the Street Medicine Institute: when you engage with a person on the street you’ve got an average of 2.7 years before they die. That adds a sense of urgency to get them treated and off the streets, Lehmann said.

But after several years caring for the homeless Lehmann knows the importance of soaking in the victories, such as getting a patient treated and off the street, even if they’re the minority of cases.

“For every five of these that you’re really spinning your wheels you get one that’s a real success story and you just hang your hat on that,” Lehmann said. “And you just get a lot of gratification from that; that really puts gas in your tank.”