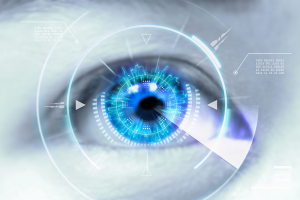 Diplopia, the official name for double vision, means seeing two images of a single object. The two images could be side by side, one above the other or displaced diagonally.

Binocular double vision occurs when each eye perceives the image in a slightly different position. It happens only when both eyes are open. Close either eye, and the diplopia disappears, leaving a single object.

Only people old enough to have a mature visual system experience binocular diplopia, because young children simply suppress the information from one eye. (that’s why children with crossed or otherwise misaligned eyes — strabismus — don’t complain about seeing double. Unfortunately this can cause vision loss in the suppressed eye if not treated.)

Some questions a doctor will ask to help sort out the problem include: Does covering either eye make the diplopia disappear? Are the two objects side-by-side, one above the other, or at an angle? And is the diplopia the same no matter which position your head is in, or does it change when you turn or tilt your head?

Usually binocular diplopia occurs because the nerves and muscles controlling eye movements malfunction and prevent the eyes from lining up properly. Rarely it occurs when the images in each eye are a different size, for example as a potential complication of Lasik or cataract surgery.

Some possible causes of binocular diplopia include:

• Myasthenia gravis, an autoimmune disorder in which antibodies to the chemical acetylcholine causes muscle weakness often starting in the eye muscles.

• Decompensation of a preexisting eye deviation (phoria). Some children have a weak eye muscle causing an eye to intermittently turn in our out. With time children often outgrow this condition. But it might return later in life leading to diplopia.

• Cranial nerve palsy affecting the third, fourth and sixth cranial nerves, the three nerves that control the eye muscles. Something could be pressing on the nerve in its course from the brain to the eye. Or there could be a problem inside the brain, such as a stroke or tumor, affecting nerve function.

Thyroid eye disease can arise in patients with a form of overactive thyroid called Grave’s disease.
Multiple sclerosis, a disorder caused by the loss of a substance called myelin, an important component of the sheath that surrounds nerves.

Convergence insufficiency, where the eye muscles aren’t able to maintain the inward turning position of the eyes required for near tasks.

Monocular diplopia occurs because of a problem with light transmission to the retina of the affected eye. Possible causes include corneal distortion or scarring, multiple openings in the colored part of the eye (iris), cataracts, abnormal position of the natural lens or of a lens implant, problems with the jelly-like material called vitreous which fills the eye, or disorders of the nerve cells that act like a camera at the back of the eye (retina.)

Wow, those are a lot of things that can cause diplopia! That’s why anyone with double vision should see an eye doctor right away.