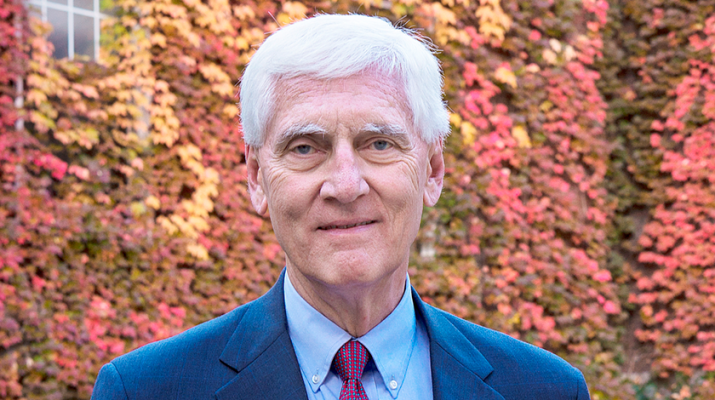 Death is a natural, inevitable part of the human experience. Physician Gregory L. Eastwood, who served as president of SUNY Upstate, has seen a lot of death and has recently published a book on the topics that’s part guidebook, memoir and philosophy book.

Eastwood is no stranger to writing. Across a medical career that touches six decades, he has penned and edited more than 140 medical papers and book chapters and completed four books. But his most recent book, unlike much of his previous work, isn’t aimed at the professional medical community.

“Finishing Our Story: Preparing for the End of Life” (Oxford University Press: 2019) is for the general population.

In it, he compiles his experiences caring for end of life patients and ethics consulting, along with advice on wrapping things up.

“I’m often called on to mediate conflicts and issues that arise,” Eastwood said. “I’m also getting older and starting to think about these issues myself.”

Many Americans don’t feel comfortable talking about death, even though it happens to everyone. Eastwood implicates fear as the reason.

“Death is not something well understood,” he said. “Is it final or not final? Other phases of life, like conception, gestation, birth, childhood and on and on, we’ve dissected those pretty well. There’s more to learn, of course, but we understand the facts and can interpret and experience them in different ways.”

Though death remains the same, he believes the process of dying has changed dramatically over the past 30 to 40 years. Memorializing loved ones changed a lot since Eastwood was a boy. Such an occasion formed his first memory, when he was 3.

“I was standing in the parlor of my grandparents’ home in Yeagertown, Pa., holding my father’s hand,” Eastwood said. “My grandmother was in her mid-70s and had died suddenly of a stroke. We were all standing around there for the wake in the home.”

He added that he remembered nothing of his family’s trip from Michigan to Pennsylvania, but the gathering in the parlor stood out to him.

“That really relates to one of the points I make in the book,” Eastwood said. “She died at home. Her family was around. Her minister lived three blocks down the street and I’m guessing he was there. The funeral costs were very low. That’s almost impossible to experience now and many wouldn’t want to because we want to take advantage of modern medicine. Sometimes, it puts us in a situation where maybe we wouldn’t want to be.”

He wrote about quality of life and what it means to him and what it should mean to anyone: a combination of physical and mental wellbeing.

When contemplating a medical emergency that causes lasting disability or diminished capacity, “people say, ‘If “that” happens to me, I don’t want to live,’ but many have ‘that’ happen and recover and adapt and live happy lives,” he said. “But at what time do we say, ‘Enough is enough.’? That’s what is hard for many people.”

He said that creating a do not resuscitate order (DNR) can be difficult. Part of end-of-life planning, the DNR is a legal document that pre-plans medical care decisions for when a person is incapable of making them. When making declarations like “Don’t intubate” or “Don’t resuscitate,” it’s impossible to know the context of the future situation.

A health care proxy agent is a trusted person who can make tough decisions based upon the patient’s wishes and the context of a specific situation.

“Not a lot of people know about VSED,” Eastwood said. “It’s a way of allowing one’s self to die where there are no laws against it. Not eating accompanies the normal process of dying. For someone who’s dying already, not eating and drinking is more natural than people think.”

The book is infused with practical advice, woven into Eastwood’s recounting of his experiences in the medical world. In the last chapter, he encourages readers to contemplate what’s important for them to do as they approach the last chapter of their lives.

“What is important to you?” he said. “Is it important to you that some friction is resolved or loose ends tied? This is the time for you to think of these things. A leopard can’t change its spots, but we can change a little bit and adjust some of the relationships we’ve had.”

For people who are nostalgic, it may be time to revisit places and people important to them.

While death isn’t easy for the patient’s family nor the patient, Eastwood views his book as a practical guide about making end-of-life decisions.

“It is about ‘finishing our story’ in that we all construct narratives of our lives,” Eastwood said. “Think about what end of life means to us. Plan accordingly. If the most important thing is the spark of life itself, or quality of life, that has to be taken into account.

“The first thing is to think about what our life means to us in the context of its ending, closely coupled with assuming it’s highly likely we won’t be able to make every decision. Who do we want to make those decisions for us? It implies that person will know how we think. It’s so important to have someone designated to do that.”

Eastwood served as president of SUNY Upstate Medical University from 1993 to 2006. Later, from 2013 to 2016, he returned to the position as interim president.

Eastwood continues to teach several courses at SUNY Upstate. He also serves on the Upstate Foundation board of directors. He also is a member of the board of trustees of Case Western Reserve University, where he received his medical degree.

He is active in several professional medical organizations.