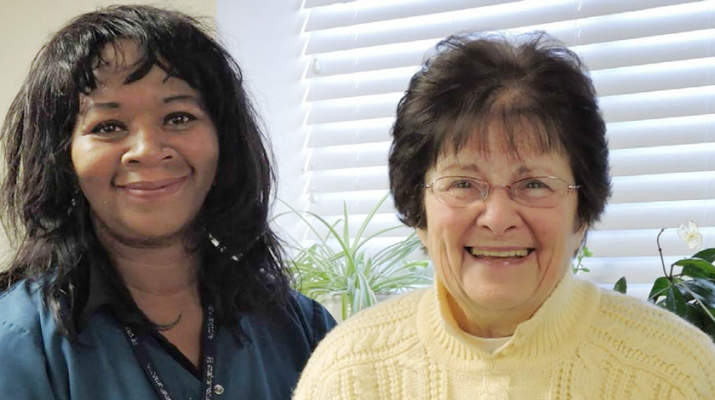 Home health aides are people who live and work with us every day, but few may take time to appreciate the vital work that they do. They impact lives on a personal level every day of the year.

“It takes somebody special,” said Kimberly A. Graf, vice president of public relations and corporate communications at VNA Homecare. “I would say it’s like a calling. Somebody said it’s the most holistic approach to healthcare that there is. That’s stuck with me all these year. I’m like ‘You know what? It’s true.’”

Home health aides are not nurses, but they do help those who need help in their homes with basic needs that they can’t do by themselves.
Carolyn Adams, a home health aide from Mattydale, got into this line of work several years ago because she says she is a caregiver at heart. She previously worked operating a daycare for children.

Adams goes the extra mile for her clients. She said that’s just part of what it takes to be a good home health aide.

“It consists of so many things: see that they take their meds; make sure they’re clean; make sure the home is clean; shopping for groceries; picking up prescriptions,” she said. “The main thing I’m concerned about is for the client to be clean and to be free from pain as much as possible.”

The latter concern was one that Adams addressed with an elderly client who she had visited not so long ago. The woman’s husband discouraged Adams from coming in the house because he said there wasn’t anything that could be done for her.

After being persistent she was able to get permission to enter the home only to find that the woman was in terrible pain. The husband had stopped giving his wife her medication because he thought it wasn’t doing any good.

Adams immediately recognized that something should be done so she called the hospice nurse on the phone who came over right away.

“After she gave her medication we gave her a nice warm bath,” Adams said. “We put a beautiful gown on her and combed her hair. She looked like a princess. She was so comfortable after that. The husband, I sat and talked with him for a while and he had tears in his eyes. He loved her so much. He didn’t know what to do.”

That’s just one small example of where a home health aide made a huge difference in two lives, Adams said. Home health aides may be unheralded, but they fill a role that is critical, according to people interviewed for this story.

Being a good home health aide requires being a good listener and having a nurturing nature, Adams said. You also need to observe for non verbal cues to try to detect any problem.

Adams expects to continue her career well into the future. She even recommends it to others she sees in her community who are looking for work.

For her, it’s a way of living as much as a job.

“This is the best field to be in, really, to be dedicated not just because you’re in it for a job but because you care about other people,” she said.