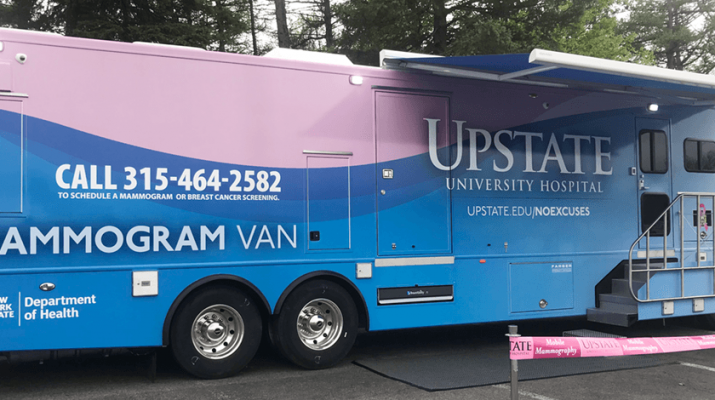 Early detection and diagnosis is the best protection against breast cancer. But for many women, access to these potentially life-saving screenings is out of reach.

A new partnership between New York State Department of Health and Upstate University Hospital hopes to eliminate those barriers with a $1 million “mammo van.” The mobile clinic will soon travel through eight Central and Northern New York counties, bringing the same kind of state-of-the-art 3-D mammography equipment used at Upstate to a much wider range of patients.

“By having a mobile mammography van in our system — in our community — we are offering this life-saving resource to all of our neighbors and friends,” said physician Ranjna Sharma, division chief of breast surgery at Upstate. “We are stating the importance of health maintenance and self-care, we are empowering members of our community to be advocates for their own health and the health of their families.”

The pink and blue mammo van is more like a bus. It’s 45-feet long, 13-feet tall and weighs 44,000 pounds. Inside is a small reception area, dressing room, exam room and table, ADA-accessible bathroom, and a technologist room where patients will be screened. When it’s up and running, a staff of eight to 10 will accompany the van on its travels. The appointments are expected to take 15 to 20 minutes each, with results emailed to patients within two to 10 days.

This is just one of several regional mobile mammography vehicles the state is funding with its “No Excuses, Get Screened” campaign. State lawmakers have taken several steps in recent years to increase breast cancer screenings through partnerships with health care organizations and legislation that funds initiatives like the elimination of co-pays for the screenings.

“This is what it’s all about — creating access and opportunity for people to remove any excuses that they may have,” said Lt. Gov. Kathy Hochul, who attended the ribbon cutting ceremony for the Mammo Van. “$91 million has been allocated to help a whole panoply of initiatives, partly which is to ensure longer hours on weekends and evenings so women don’t have to sacrifice money from their jobs or time away, but also to the countless women and families who are under-served because they don’t have the transportation to go to an urban area where there would be screening — this is the answer to that problem.”

According to the New York State Department of Health, breast cancer is the most common cancer among women in the Empire State and the second-leading cause of cancer-related death in New York women.

Upstate’s physician Sharma says the mortality rate for breast cancer has seen a significant decrease since the 1990s, largely attributable to the rise of improvements in screening mammography. Detecting breast cancer early as a mammographic abnormality — sometimes years before it would be detected on a physical exam — allows for more treatment options. And Sharma says those treatments may be less extensive and less aggressive when these cancers are caught earlier.

Syracuse resident Janet Bacon knows how critical early detection is. She survived breast cancer after getting a screening at Upstate in 2015. Now, Bacon says it’s her time to give back. She plans to travel with the Mammo Van to encourage other women to get this test.

“It means so much to me because people in rural areas probably don’t get this information, don’t get the screenings like they’re supposed to,” Bacon said. “So, this van can go out, get the mammograms, give you the peace of mind. That’s what I’m all about – helping getting people signed up, getting that very important mammogram to save their life like they saved mine.”

A complete list of locations and dates and is available at www.upstate.edu/mobile-mammography/request-appt.php

To schedule an appointment for a mammogram with the mobile unit, women should call 315-464-2582. Appointments can also be made online at www.upstate.edu/mobile-mammography.

Mammo Van Coming to Your Neighborhood