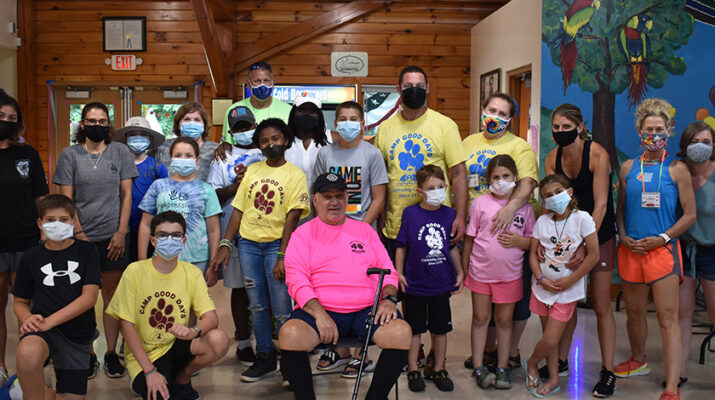 Camp Good Days was founded by Gary Mervis after his daughter, Elizabeth “Teddi” Mervis, was diagnosed with a malignant brain tumor at the age of 9, in 1979. She ultimately died in 1982. 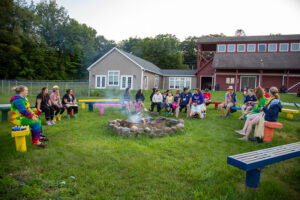 “For me it’s a memorial to my daughter, Teddi — she’s the reason that I started it and it’s helped to keep her a part of my life every day,” he said. “And, to be honest with you, I don’t know what I’d do if I didn’t have this. I retired from my state job in 1994. Then I coached football up until two years ago at St. John Fisher College. This has become my everything else. I never looked at this as a job. This was my memorial to Teddi and probably the only thing in my life that really makes some sense out of something that didn’t make any sense.”

Marvis believed the loneliness of being the only child in her school and neighborhood dealing with cancer was as painful to his daughter as the treatments.

Camp Good Days has helped kids with cancer — and their families — for 43 years, until COVID-19 hit.

“Over these past three years it’s been really tough. We weren’t able to operate,” Mervis said.

But he is opmistic about the activities the camp plans for this year.

In July, Camp Good Days is going to do family camps then in August a traditional children’s camp, Mervis explained, adding, “We’ll be real busy pretty much all summer.”

What has made Camp Good Days so successful for over four decades is because it takes children who are dealing with cancer and it gives them a chance in a beautiful part of our state where people are there because they want to be—gives kids a chance to be kids again, Mervis said.

A lot of these children grow up too quickly, make adult decisions, he said.

“The treatment options are some of the most potent that medical science can come up with. Sometimes when a child is going through treatment a lot is happening to them and their bodies and they don’t feel very comfortable,” he continued. “They might be the only one in their neighborhood or church or synagogue or school dealing with this thing called cancer. Here at Camp Good Days, they get a chance to be with others who are probably the only other people in the world who can really understand what it’s like to be them; other children also going through cancer.”

Mervis’ daughter is always in his mind and helps guide his decision.

“I tell people all the time — at night a lot of times before I go to bed I will just kind of say to myself what would Teddi think; would she think I’m doing a good job?” he said. “That’s what keeps me going and the day that I ask that question and I’m not doing a good job, then it’s time to do something else; unless the good Lord intercedes before that.”

Mervis made a promise to himself when he first started Camp Good Days. When Teddi was in the hospital, he’d run into some other parents who had a child in the hospital at that time and realized how blessed he was.

“I had a good job with good benefits, our marriage was very good … Teddi was doing OK. But I saw a lot people who were really torn because they quit work to be with their child; especially initially to get them to the many doctor appointments and sitting with them when they are getting their treatment. Finances was a big thing and I didn’t want to see anyone with a child who had cancer have to make a choice to take a child to Camp Good Days or make a car payment or pay the rent or mortgage. So I said that all of our services and programs would be provided free of charge,” he said.

That was great in the early years; they didn’t have a lot of kids, he noted. But over the years with the increase in kids and just the overall cost of things, it became very expensive.

“But because of the support of so many people who believe in what we are trying to do I’ve been able to keep that promise. No family has ever had to worry about paying. I never wanted potential campers to be turned away by cost,” he explained. “I never wanted people to have to choose between a car payment and going to camp.”

The camp is located on Keuka Lake. “It’s a beautiful part of our state. We’re right across from Keuka State Park. It’s a total of about 15 acres, all level and we use every bit of it. It’s a very special, special place. The camp also maintains offices in Buffalo, Syracuse and Ithaca,” he added.

Mervis heard about a doctor in Michigan who had taken children from their clinic, rented an outdoor camp and took the children there.

“The camp was as far removed from the sterile environment of the hospital as you could get. I saw those kids having fun and all I could think about was I wanted to send Teddi to that camp,” Mervis said.

He tracked down the doctor — a pediatric oncologist with the Upjohn Corporation in Kalamazoo, Michigan.

“He explained to me it was a new concept and his was only the fourth in the country. We didn’t really have anything for our kids here. So, I made an appointment with the head of Roswell Park and Upstate Medical Center. There were more than enough childhood cancer patients in the area to warrant such a program, albeit it many of them were too young to go to camp; some were in the midst of treatments and couldn’t go. But there were more than enough,” Mervis said.

That doctor was going to be in Buffalo on business. Mervis decided he’d drive to Buffalo and pick him up, bring him to Rochester and he’d stay overnight and the next morning at the Rochester Academy for Medicine they’d have an informational meeting.

And so, Camp Good Days was born.

The first event was held in the Adirondacks at Inlet, New York.

“No sooner had we put the children on the buses to go home, we were sitting around talking about how we could make this bigger and better the next year,” he said.

By the time the third year rolled around, 1982, Teddi had lost her battle. Many of the other children were sicker, as well. The medical staff decided camp needed to be closer to a major childhood cancer treatment facility.

Most of the medical staff came from the University of Rochester.

“So we drew a 60-mile radius around the U of R and looked at camps that we might be able to rent in that area,” he said. “Some of the camps that we looked at were in such disrepair that they wouldn’t meet the needs of our children.”

At first, week-long camp experiences were held at private camps. In 1986, the Branchport property, formerly cottage resorts Campbell’s Beach and Pebble Beach, was purchased to provide expansion of the program.

“We spent, I think, almost three years getting it ready so we could get permission from the state so we could operate a children’s camp,” he said. “It was a real blessing when we were able to move all our programs to one facility.”

The camp has served more than 50,000 campers from 22 states and 27 foreign countries.

“Before this COVID came, during the course of a summer, we’d have 1,200 to 1,500 children from the time we opened up our program at the start of June and ended usually with our weekend programs in September and October… right before election day,” he said.