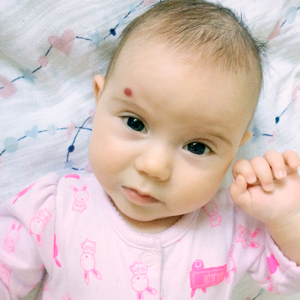 Birthmarks are skin irregularities present at birth or appearing within the first few weeks of life. They can arise from pigmented cells (melanocytes), from blood vessels, or from other skin components.

Over 80 percent of babies are born with some sort of birthmark. Fortunately most are simply endearing marks that make babies unique to their mothers. Most have no long-lasting medical consequences or serious cosmetic effects.

Two percent of newborn infants have congenital melanocytic nevi — commonly called moles. Most are small, less than 0.5 centimeter (about 0.2 inch). Small moles remain less than 1.5 centimeter (0.6 inch) in adulthood, and rarely cause problems.

In addition to causing cosmetic problems, they have a high risk of becoming cancerous over time. They can morph into malignant melanoma, a dangerous type of skin cancer. Even removing a giant nevus does not completely eliminate the cancer risk. Melanoma can still occur at the original site or at a more distant location.

Dermal melanosis, commonly called Mongolian spot, is a common pigmented birthmark. These flat spots are blue, gray or brown. Typically they are found on the lower back or buttocks. They fade away in a few years. Sometimes Mongolian spots are mistaken for bruises, potentially leading to incorrect accusations of child abuse.

A type of birthmark formed from vascular (blood vessel) tissue is a hemangioma, sometimes called strawberry mark. Not always be visible at birth, they soon appear and grow for several months. The hemangiomas next enter a rest phase lasting a few months. Starting at about 1 year of age, hemangiomas shrink and most disappear by age 5. For this reason treatment usually isn’t necessary unless so large that the circulation is affected, or if the location affects body function.

For example, a hemangioma on the eyelid could prevent normal vision development. Sometimes hemangiomas occur internally where they may be asymptomatic or cause problems such as airway obstruction. Treatments include surgery, laser treatment, or medicines that cause shrinkage.

Nevus flammeus, also called port-wine stain, is another vascular birthmark. They are visible at birth as flat dark red to purple lesions. Rather than fading over time, they can deepen in color and become bumpy. When cosmetically problematic, they can be treated by laser. The best results occur when treated early, before 1 year of age. Port-wine stains occurring near the eye may cause glaucoma. They also can, be part of Sturge-Weber syndrome where the underlying brain is affected leading to seizures and intellectual disability.

Nevus simplex occurs in 1/3 of babies. Also called “stork bites,” “angel kisses,” or salmon patches, these are flat pink to red lesions. They are usually found in the midline. Common locations back of the neck, forehead, eyelids, and lip. Most resolve spontaneously by age 2 or 3. Laser treatment can treat persistent facial lesions.