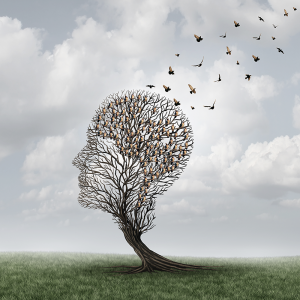 Up to 75 percent of people with dementia have behavior changes that could drive even the most patient caregivers bonkers.

They might have delusions, an insistent belief in something irrational and false.

My friend’s father, married for more than 60 years, became convinced that his devoted wife was trying to steal their home and boot him out into the street.

Some people have hallucinations: seeing, hearing or feeling something that simply isn’t there. Hallucinations could be frightening events, visions of the past or reliving old experiences.

Another disturbing behavior is wandering. I belong to a search and rescue team, and have seen some tragic outcomes. Wandering dementia patients often keep going for surprising distances until meeting a physical barrier like a cliff or impenetrable brush, before stopping.

Anger, agitation and aggression affect some patients. All of the above contribute to caregiver exhaustion and burn out.

There is no easy fix.

Medicines — more about them at the end of this article — are best used only after nondrug strategies fail. Dementia behavioral issues aren’t rational. No amount of reasoning or explaining will help. When you start to feel frustrated, remember that your loved one isn’t deliberately trying to be mean or difficult.

• Step 1 — Rule out physical or psychological stressors that trigger problems: hunger, thirst, pain, nausea or toileting difficulties. Is the patient sleep deprived, fatigued, depressed, lonely, bored or over stimulated? Is the room temperature too hot or too cold? Is there excessive background noise? Is lighting inadequate? Any of these could spark emotional meltdowns.

• Step 3 — What can you do when a dementia patient becomes agitated or argumentative despite your efforts to ensure comfort and routine? Arguing or repeating explanations goes nowhere. Redirection, turning the patient’s focus to something different or distracting, works better.

• Step 4 — Try to remain calm, confident and agreeable. The patient isn’t logical. So your response to an agitated patient doesn’t have to be logical so much as agreeable. The hundredth time that someone says, “Is it time to eat” shortly after a big meal or asks, “When are we going home?” you can smile and say “OK, we’ll have lunch in a bit” or “We’ll be going soon, in the meantime how about we take a walk?’

• Step 5 — Consider starting a conversation about his or her interests. Ask the patient for help with a simple task such as folding towels. Perhaps redirect the patient toward simple exercise or activity.

To make the environment safer, remove firearms and weapons. Add locks, alarms or tracking devices as needed for wanderers.

Of course none of this is easy. Sometimes medication adds to (rather than substituting for) behavioral measures. There is only limited evidence that psychiatric medicines benefit dementia patients. Side effects can cause harm. No medicines are FDA-approved for treating behavior problems in Alzheimer’s patients.

Reserve drugs for behaviors that could harm the patient or others: physical assaults, verbal assaults or dangerous wandering.

Antidepressants may relieve for depressed mood, anxiety and irritability. Antipsychotics have been tried for hallucinations, delusions, aggression, agitation and uncooperativeness. Antipsychotic medicines increase the risk of stroke or death in patients with dementia, and are used with extreme caution in the lowest possible dosage for as short a time as possible.

Any medication should be directed toward specific symptoms that can be monitored to determine effectiveness. Only one medicine should be started at a time, and at the lowest possible dose, and adjusted slowly.

Check out the Alzheimer’s Association website for more information. www.alz.org/care/