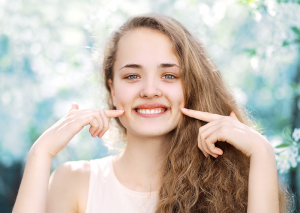 My husband, his mother and three of his four siblings have dimples. No one in my family has dimples. It took me three children to produce a single dimple on my youngest daughter’s left cheek.

So are dimples inherited?

The jury is still out. Some scientists say yes, they are passed from parents to children as a dominant trait. A dominant trait is one that requires just a single copy of the relevant gene.

Others believe the apparent familial clustering is just a coincidence and that dimples are simply a random occurrence.

I never really thought about what causes dimples until a friend’s high-school-age daughter announced that an abnormal muscle causes cheek dimples.

When the individual smiles or makes other facial expressions, it pulls the skin into a dimple.

Chin dimples, which are present regardless of facial expression, arise from a cleft in the underlying bone. The cleft a remnant of incomplete fusion of the two halves of the jaw bone during development.

Is there a purpose for dimples? One theory is that dimples are associated with infancy and trigger a nurturing response in adults. This notion suggests that adults are less likely to harm or neglect a cute dimpled infant, even if screaming and fussy at 3 a.m. This increases the odds of survival.

Facial dimples may be cute, but sacral dimples are sometimes a completely different matter. These dimples are found overlying the sacrum, the part of the spine just above the coccyx or “tail bone.” They occur in about 4 percent of people and most of the time they are harmless. A small percentage of sacral dimples, however, signal an underlying defect of the spine, such as spina bifida or a tethered cord. Shallow dimples that are fully covered with skin are usually benign.

Signs that suggest a potential serious problem are a tuft of hair, a skin tag, skin discoloration or leg weakness.  Sacral dimples are present at birth. The next test, if a sacral dimple appears possibly worrisome, is an ultrasound.

Spina bifida is a condition where the spine does not form fully. In the most serious form, myelomeningocele, the spinal cord and its covering form a bulge. The nerves are usually damaged, causing disability that can be serious.  Meningocele is an intermediate defect where only the covering of the spinal cord bulges out, generally causing less serious nerve damage and disability. The most minor form is called spina bifida occulta. Although the bone isn’t fully formed, no spine tissue bulges out and there is usually no disability.

One potential cause of spina bifida and related disorders is folate deficiency in a pregnant woman. Prenatal vitamins contain extra folate and reduce the chance of these birth defects. Because the spinal cord forms early, folate is most effective if started before a woman even realizes that she is pregnant. That’s why women of childbearing age who might become pregnant should take folate-containing vitamins even before conception.

A tethered cord occurs when the underlying spinal cord is attached or stuck to overlying tissues.  As the child grows, the spinal cord is stretched or pulled, resulting in nerve damage. If discovered early it can be treated surgically before symptoms occur.

Fortunately most sacral dimples aren’t dangerous. It’s a matter of opinion as to whether they are as cute as cheek dimples.