About 39 million people in the U.S. have migraines — one in five women suffer from it 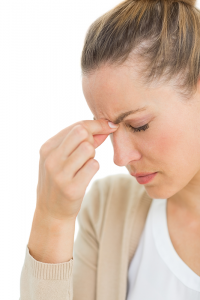 As a migraine sufferer, I was excited to learn about a new treatment under development to treat migraine headaches.

Many people incorrectly label any severe headache as a migraine. Migraine is a specific syndrome of recurring headaches, often accompanied by nausea and vomiting, sensitivity to light and sound, with pain typically located on one side if the head, and pulsing or throbbing in character.

About one-third of migraineurs have an aura of strange sensory symptoms just before the start of the headache, most often in the form of vision disturbances. Many migraineurs experience a prodrome warning of an impending attack: fatigue, yawning, mood swings, light sensitivity and other vague systems.

Egyptian medical documents dating back to 1200 B.C. describe the disorder, making it one of the oldest diseases ever detailed. About 39 million people in the U.S. have migraines — one in five women and one in 16 men.

Migraines seem to run in families, and more than three dozen genes have been associated with migraine susceptibility.

The exact mechanism leading to migraines remains unclear. An early theory proposed that distended, dilated blood vessels in and around the skull produce the typical pulsating pain of migraines.

In the 1940s neurologist Harold Wolff discovered that administering a drug to constrict blood vessels could alleviate the pain. This led to the first migraine-specific medicine, ergotamine tartrate. Unfortunately, ergotamine has multiple side effects such as nausea and vomiting (already a problem during a migraine), elevated blood pressure and constriction of arteries impairing circulation to the heart or extremities.

In the 1970s and 1980s researchers found that during migraine attacks people seemed to be losing serotonin, as the levels of serotonin dropped in the blood and rose in the urine. Administering serotonin could reduce the headaches but, as with ergotamine, produced serious side effects.

Scientists searched for drugs that could bind more specifically to serotonin receptors. This led to sumatriptan and similar triptan medicines. While often helpful, triptans completely relieve migraine pain for only 30 percent of people, and the pain may come back later the same day. Triptans, too, have unpleasant side effects, such as chest, tightness, dizziness, drowsiness, tingling, and flushing of the face and neck.

Also in the 1980s, Swedish scientist Lars Edvinsson began studying calcitonin gene-related peptide (CGRP), a substance found in the nerves around the blood vessels inside the skull. CGRP potently dilates these blood vessels, and its administration to migraine sufferers triggers an attack.

So it seems that if this substance could be blocked, perhaps that could lead to another way to treat migraines. Scientists in Germany succeeded in designing a CGRP antagonist, a molecule that blocks CRGP receptors. It worked to stop migraines when given via IV. But as promising as this seemed, again there was the bugaboo of side effects. In this case the CGRP blocker caused serious liver problems.

The next innovation was to build a monoclonal antibody, a protein able to bind and block CGRP receptors while leaving the liver and other vital organs unscathed. But antibodies are too large to pass from the blood into the brain, and so it seemed possible this wouldn’t help. Yet it seems to work. Apparently blocking CRGP in nerves outside the brain helps block pain signals entering the brain through the periphery.

Clinical trials studying the monoclonal antibody so far have shown few side effects. It seems reasonably effective, preventing migraines completely in one out of six patients, and cutting the number of headache days by more than half in 70 percent of patients.

Although this drug appears more effective with fewer side effects than many currently available migraine medicines, there are drawbacks. It would have to be given via every three-month IV infusions, or by monthly self-injections. The long-term safety isn’t known. Most migraineurs are woman of childbearing age, but the safety during pregnancy isn’t known.

Other drugs being developed for migraine treatment include serotonin blockers specific for nerve cells without affecting blood vessels. The aim is to reduce the headache without the side effects of blood vessel constriction.