Some are beneficial for humans and other cellular organisms 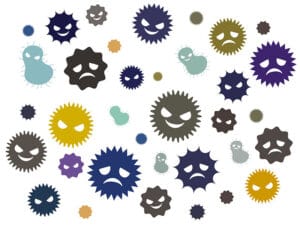 What comes to mind when you hear the word virus? Do you think of the words bad, disease, dangerous?

That’s only natural given the current pandemic. But most viruses don’t cause disease. Some help other organisms adapt and thrive. Life probably couldn’t have arisen without viruses. Mammals carry at least 320,000 different species of viruses. Add to that viruses that affect other animals, plants and bacteria and the total number of virus species is, who knows? Millions, probably.

What is a virus? They are composed of strands of DNA or RNA that provide genetic instructions. This genetic material is wrapped in a protein capsid. Viruses lack the complex machinery of living cells and are unable to reproduce unless they enter living cells. So, are they alive? Some say yes and some say no.

There’s a third point of view that viruses are alive when inside a cell and not living when they are outside of a cell.

Where did viruses come from? Scientists have three theories: virus first, escape and reduction. The virus first hypothesis proposes that viruses appeared before cellular organisms, arising from the primordial soup (mix of chemicals on earth prior to the beginning of life). The escape hypothesis suggests that segments of DNA or RNA escaped from living cells, enclosed themselves in proteins and became viruses. The reduction hypothesis theorizes that some cells downsized and became smaller until there was nothing remaining but nuclear material and a protein shell. This gave them a competitive advantage because smaller organisms require fewer resources to live and reproduce. But it necessitates the invasion of other cells to survive.

Most viruses are tiny. For example, 55 million Zika viruses could fit on the period at the end of this sentence.

Typical viruses are only visible with electron microscopes. But, in 2003 scientists discovered giant viruses that could be seen with a light microscope. These giant viruses contained genes for enzymes previously found only in cells. This supports the reduction theory of virus origins, that viruses evolved from cells that downsized.

Most viruses use DNA to direct cells to manufacture RNA. RNA is the cellular messenger which provides instructions for protein manufacture. Other viruses, called retro viruses, act in reverse. Retroviruses use their RNA to make DNA. The DNA inserts itself into the host cell’s nucleus. HIV is an example of a retrovirus. It invades human immune cells, causing them to make more HIV viral particles which destroy the cell as they burst out.

Some retroviruses infect reproductive cells that produce eggs and sperm. The DNA that these viruses insert into the host’s genetic code become heritable, able to be passed down from generation to generation. The inserted stretches are then called endogenous. If this occurs in a human, they are called human endogenous retroviruses (HERVs).

About 8% of our genetic material derives from HERVs. That provides an example of a beneficial virus. The genes that code for several proteins essential to the production of the placenta are HERVs. Without these genes internal pregnancy would be impossible. We’d have to lay eggs and incubate them on a nest.

Most disease-producing human viruses arise when a virus from another animal species spills over into humans. The virus may have coexisted in peaceful equilibrium for thousands of years in a reservoir host. But once it enters new host, the virus reproduces unchecked, causing illness, discomfort, misery or even death. If the human transmits it to a few other people, that’s an outbreak. If the disease spreads through a community, it’s an epidemic. And if it spreads world-wide, it’s a pandemic.

If the SARS-CoV-2 virus jumped from an animal to humans, which species was the reservoir host? As I write this article, we don’t yet know. The prime suspect is a horseshoe bat. Another candidate species is the pangolin, sometimes called the scaly anteater.

While some viruses cause dangerous and deadly illnesses, others are beneficial for humans and other cellular organisms. Virologists still have much to learn about this fascinating life form.