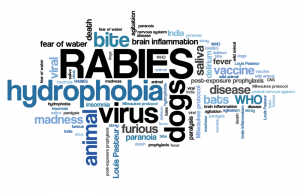 When my youngest daughter was about 6 or 7, she and her friend had a game they called “rabie [sic] chicken.” It was a version of tag where one child was a rabid chicken pretending to froth at the mouth, trying to tag the others. She and her friend didn’t really know what rabies was other than what they had learned from watching cartoons.

Their first mistake was selecting a chicken as the infected critter. Rabies is a virus that infects mammals (although, in the laboratory, the rabies virus can infect bird cells). Rabies affects the nerve tissue of infected animals. It’s chiefly spread by contact with the saliva of an infected animal.

Once an animal is bitten, the virus travels via the peripheral nerves to the brain. After reproducing in the brain, the virus now spreads to the salivary glands.

Symptoms of rabies develop days to weeks after a bite. The initial symptoms resemble the flu, with weakness, muscle aches, fever and headache. As the disease progresses, delirium, abnormal behavior, hallucinations, excessive salivation and insomnia develop. Once a human develops symptoms, he or she invariably dies. There have been just a handful of patients who reportedly survived rabies infection after intensive treatment and a prolonged hospital course.

The most important reservoirs for rabies in the United States are raccoons, skunks, foxes, coyotes and bats. Domestic animals such as dogs, cats and ferrets — especially those that haven’t been vaccinated — can potentially become infected by contact with a rabid wild animal.

If an animal bites you, the very first step is to clean the wound. The most effective method is to use plenty of soap and running water to clean and irrigate the bite. Your next step should be evaluation by a medical professional. The wound can be assessed for damage to underlying structures such as tendons. If needed, antibiotics can be started. For example, the little sharp needlelike teeth of cats act like hypodermic needles to inject bacteria into bite wounds. This leads to an infection rate as high as 50 percent, so cat bites almost always require antibiotics to prevent bacterial infection.

In New York state, the health department decides whether rabies post exposure prophylaxis (PEP) is needed. Medical providers are mandated to report animal bites to the health department. The county health department then investigates. Living animals that can be observed will be placed in quarantine for 10 days. If no symptoms develop within that 10-day period, rabies PEP isn’t needed.

If the animal is dead but the head is available for investigation, the state lab examines the brain for signs of rabies. If the animal is not available, as when the biter runs off and disappears, or an overzealous human bashes its brain beyond recognition, the health department will determine whether rabies PEP is needed based on species of animal and circumstances of bite.

The rabies vaccine is given as a four-part series. It’s injected in the shoulder on day 0, and on days 3, 7, and 14. Immunocompromised patients may need a fifth dose.

The greatest reason that I see people hesitate to come and seek medical care for an animal bite is fear that the health department will take their pet away. Given how serious rabies is, it’s important to determine whether a human who has suffered a bite needs rabies PEP. It’s very expensive and should be given only when required. The health department’s goal isn’t to take someone’s pet away. It’s to determine whether there is a public health threat. So please don’t let that deter you from seeking medical care for an animal bite.

We’re lucky that New York state is one of the few states where the health department actually picks up some or all of the cost of the vaccine itself. Here’s a link to a story about the high cost of rabies vaccine https://www.webmd.com/a-to-z-guides/news/20180220/the-high-cost-of-surviving-rabies