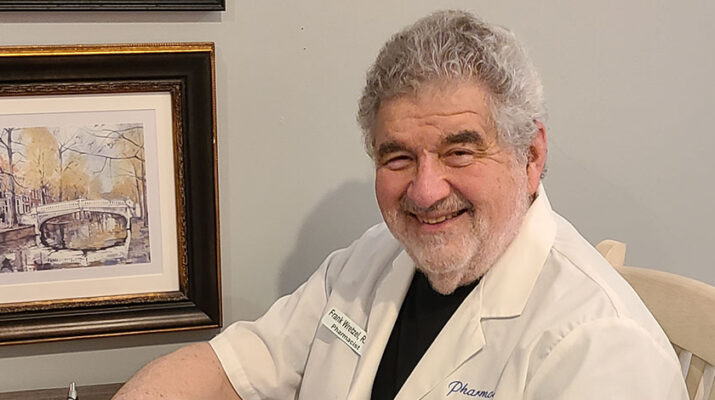 In addition to improving circulation, some users have found off-label uses the maker did not anticipate

For nearly 50 years, Frank Wretzel of Baldwinsville has worked as a pharmacist, most recently at Buffalo Pharmacy at The Centers at St. Camillus in Syracuse. He is also a certified diabetes educator. He has known of people with diabetic who suffered amputations because of their poor circulation. That is why he decided five years ago to develop a product to combat the issue.

The result was Renew Foot Cream, produced by KPW Laboratories, LLC, and for sale on Amazon for the past two years.

“I wanted it to be all-natural and without anything in it harmful to the skin,” Wretzel said.

Working with a manufacturer in Miami, it took three years to develop the final product that he would name Renew Foot Cream.

“It’s designed to improve the microcirculation in the epidermal layer of the skin where capillaries and small veins are,” he said.

In addition to improving circulation, some users have found off-label uses he did not anticipate, like preventing nighttime leg cramps, helping reduce the cold, numbing effects of Raynaud’s syndrome, minimizing athletic soreness and supporting the renewal of dry, cracked skin in other places on the body.

“’Foot cream’ has become a misnomer,” Wretzel said. “I left the name that way though. I’m really proud of what we’ve accomplished. It’s way beyond anything I had anticipated.”

The cream uses peppermint oil as its base for a topical anesthetic. Wretzel said that the smell dissipates quickly, unlike menthol-based rubs like Ben Gay that linger indefinitely. Users also laud Renew for its quick absorption, as it does not leave behind a greasy residue.

“My goal is to get it in the hands of as many diabetics as I can and people who could take advantage of the moisturizer,” Wretzel said.

He also hopes to continue to expand its use for those with arthritic joint pain.

“Ben Gay works because it causes irritation to the topical layers and causes the body rush blood flow to that area,” Wretzel said. “It makes you feel warm and good. But, the problem is because you get blood flow, after it dissipates, you get some under-skin swelling. That many times causes more pain than you originally started. That concept only feels good when you put it on but it doesn’t do anything.

“Mine doesn’t cause skin irritation. It penetrates the skin to reduce the swelling where it’s being used.”

In addition to peppermint oil, Renew includes about 20 ingredients, such as tea tree oil, an anti-inflammatory agent; willow bark, another anti-inflammatory; and Peru balsam a moisturizer. The cream has no contraindications unless someone was allergic to any of its ingredients.

“We’ve had a lot of repeat sales,” Wretzel said. “With the five-star reviews on Amazon—I’m so thrilled. You can see how many people it is helping. I’ve started developing it while in my 70s. This is a dream and something I’ve been wanting to do a long time and I’m doing it.”

A three-ounce jar is available on Amazon for $18.99. The product is made in the USA.