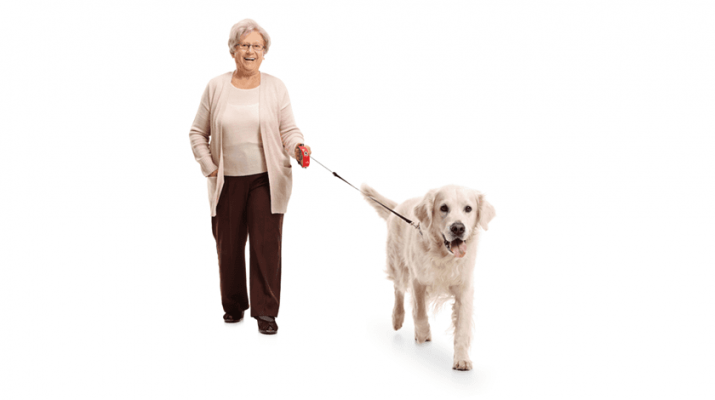 Fall-related bone breaks involving senior dog walkers has risen substantially. But there are ways for seniors to mitigate the problem

Owning a dog can provide lots of motivation to get out and walk. While that’s great for your health, dog walking can raise the risk of falling, especially if you’re an older adult.

A study recently published in JAMA Surgery looked at 100 hospital emergency rooms nationwide. The number of fall-related bone breaks involving senior dog walkers has risen substantially for more than a decade, from 1,671 in 2004 to 4,396 in 2017.

Of those involved with the study, 79% were women, who because of their smaller bone structure are more at risk for bone breaks. The most commonly broken bone was the hip (17%) but more than 50% broke an upper body bone, including the shoulders, arms, hands, wrists and fingers. Nearly one-third required hospital admission. The researchers blame both dog manners and owner conditioning.

Many elderly people who experience a hip fracture never quite regain the level of health they experienced previously. Some also become so de conditioned that they can no longer live independently.

Deterioration in physical fitness may contribute to dog walking related falls, since muscle mass and balance tend to decline with age.

Elizabeth Cullen, a doctor in physical therapy and owner of CNY Physical Therapy and Aquatics in Camillus and North Syracuse, said that physical therapy for older adults who have noticed balance issues — such as having to take a quick step to stay upright — can make a big difference. Physical therapy can help improve balance, she said.

“Then, if there is a slight jolt in your balance, you’re able to maintain balance,” she said.

“It can help them if they need to make a quick movement and still hold themselves up,” he said. “If they lean forward and can’t hold themselves up, they’ll fall. They need to be able to move in different directions, like stepping out to the side as far as they can go so it’s not foreign.”

How you walk the dog also matters. Mossotti advises dog walkers to avoid wrapping the leash around their hands in case the dog bolts.

“Then you can’t let go,” Mossotti said, “and the dog pulls them down.”

Avoid becoming distracted while walking with your dog.

“Be mindful of how you’re walking and where you are,” Brown said. “Sometimes people get tangled in the leash, but usually the dog is too rambunctious.”

While she appreciates the health benefits of dog walking, she acknowledged that they can contribute to falls if walkers aren’t careful.

Using the right equipment will make a big difference while walking the dog. Wearing stable footwear as well as selecting the right leash can greatly improve safety.

Andrea Giordano, professional dog trainer and owner of Dogs Among Us in Oswego, suggests harnesses that fit at the front of the chest instead of the back, or a head harness.

While it may seem a great idea to simply drive your pooch to a dog park to let it run freely in a safe, fenced area, Giordano said that can be the most dangerous places for older dog owners.

“Once they let the dog run off the leash, the possibility of getting run over by someone else’s dog is high,” she said.

If you’re in the market for a new dog, consider your choice carefully. Large, powerful dogs may be much harder to control than a smaller dog. But the dog’s personality and age also make a difference.