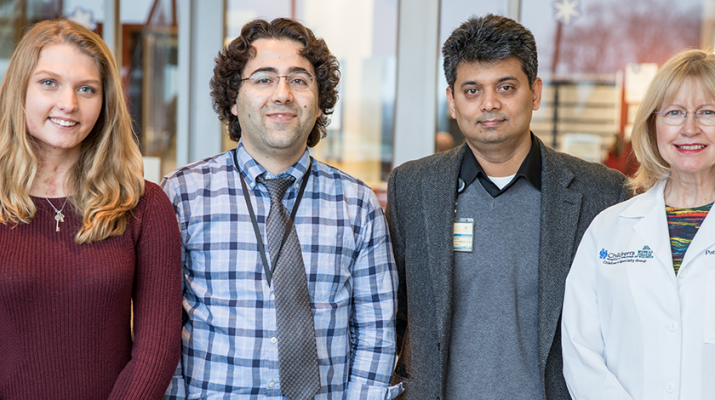 When Kelleigh Gustafson was 4 years old, she was diagnosed with massive arteriovenous malformations, affecting the right side of her head, neck and chest.

Now, at 21 years old, she is living with AVM, while starting a nonprofit organization to set up and pay for research to find a cure.

AVM is when one’s arteries multiply at a dangerously high rate, creating a mass that can be potentially fatal. When AVM occurs, capillaries, which connect high-pressure arteries to low pressure veins, are missing. Gustafson is at risk for hemorrhaging, headaches and increased pressure on the heart.

“My family was told there is very little more that can be done for my disease,” Gustafson said. “Where it is, it is getting harder to treat and the risks are outweighing the benefits.”

Gustafson’s condition is rare because of the location. Where most AVM occurs in areas that can be surgically removed, Gustafson’s is on the right side of her head, affecting her sensory organs, trachea, esophagus, brain and heart.

“There is no cure, so all of the treatment is very experimental,” Gustafson said.

Gustafson’s doctor wanted to move her toward a non-aggressive form of treatment in a pill form and start research for it, but there was scant funding.

“We started Kelleigh’s Cause as a way to host fundraisers and raise awareness for the disease,” Gustafson said. “All the money raised goes to that medical research.”

More than $150,000 has been raised which funded the purchase of Zebrafish to test the drugs on, and a medical researcher for two years who focuses of AVM.

“We really hope we can find a cure for this disease,” Gustafson said. “Once that happens, we want to fund the development on that drug.”

Donations can be made at www.kelleigh.org, where you can get a list of upcoming events.

Every six months, Gustafson has extensive surgeries, planned around her school schedule. Gustafson is a senior at Le Moyne College in Syracuse.

“Since I was 4 years old, I’ve had surgeries twice a year to slow down the spread of it and contain it in one area,” Gustafson said.

Gustafson said a few times she has had life-threatening reactions to the medicines and treatments, causing her to be in the hospital for months at a time.

“My whole life I’ve been going in and out of hospitals to try to keep it calm and not have any symptoms,” Gustafson said.

Gustafson’s family is active, and she has tried to play every sport, but doctors have not allowed her to play certain sports. She discovered golf and can play it as much as she wants at Le Moyne.

When Gustafson was a junior in high school, she started Kelleigh’s Cause. While the hope is to find a cure, the end goal for Kelleigh’s Cause is to become a place for people to turn to for those who have AVM or other rare diseases.

“We want to be the support system,” Gustafson said. “We want to develop more support for people in the community [and be] a source for them to turn to for help.”