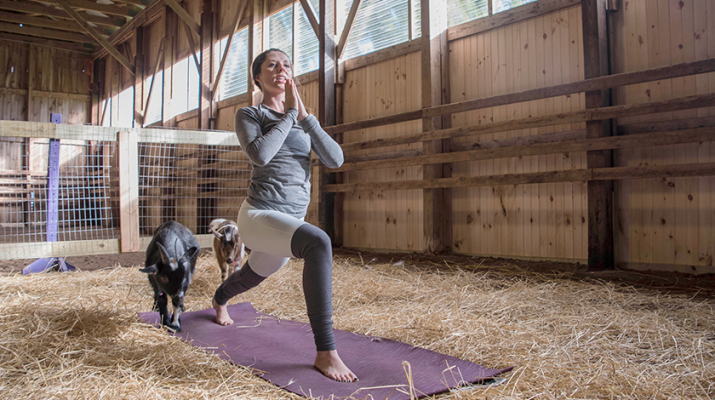 Off-beat ways to perform yoga has become a huge trend, thanks, in part, to a new generation of yogis

Today’s yoga scene sounds like it took a page from Dr. Seuss’ “Green Eggs and Ham.” But yogis are practicing on boats, with goats — and in hammocks, on horseback and with a lap full of puppies or kittens.

Off-beat ways to perform yoga has become a huge trend, thanks, in part, to a new generation of yogis looking for a fun, quirky way to enjoy an ancient practice.

“Some are fusing other forms of exercise, like hooping or Pilates to the yoga program,” said physician Joanne Wu, an integrative and holistic medicine and rehabilitation doctor practicing in Rochester, who also teaches yoga in Syracuse. “Others are a brand new form of movement. It makes it more fun and keeps people challenged. For yoga practitioners, it helps remain mindful of their exercise program while trying something new.”

Wu teaches aerial yoga, which uses silk fabric and hammocks as props to help students perform circus-like movements with yoga; pi-yo, which merges Pilates and yoga; barre yoga, a mix of ballet and yoga; acrobatic yoga, where a partner aids in achieving poses; and SUP yoga, which uses a stand-up paddleboard on the water.

“There are definitely ways to make yoga fun and lighthearted, but maintain the mind/body connection that makes yoga what it is,” Wu said. “I’ve worked on blending different exercises with a yoga core. People want to stay active and still learn new things while keeping old traditions. They want something a little different incorporated into their program.

“Alternative yoga is helpful for a yogi who wants to stay grounded with mat practice, but expand their horizons and meet more people in the community.”

For example, animal lovers may try goat yoga for the sake of the critters, even if they’re not that familiar with yoga.

Mallory Wisniewski is a certified yoga instructor who teaches yoga at Elevate Fitness in Syracuse. She is also one of the area instructors who leads goat yoga classes at Purpose Farm in Baldwinsville. She thinks that participants enjoy the animals, practicing outdoors, and knowing that they’re “helping support these rescue animals,” she said.

Proceeds from goat yoga help pay for the care of the 40 animals living at the farm. Purpose Farm has rescued 67 animals since opening in 2012, according to its website. Animals that don’t obtain permanent placing remain at the farm for their natural lives.

In addition to the novelty of the location and helping a good cause, goat yoga enhances the tranquility of the session and, at times, adds a lighthearted touch as the farm’s handful of goats frolic among the yogis.

“It’s beautiful how friendly the animals are,” Wisniewski said.

Both Wu and Wisniewski said that alternative yoga classes aren’t just for advanced students. People of any ability should be able to participate, “from people who have never tried yoga, to those who can do head stands,” Wisniewski said.