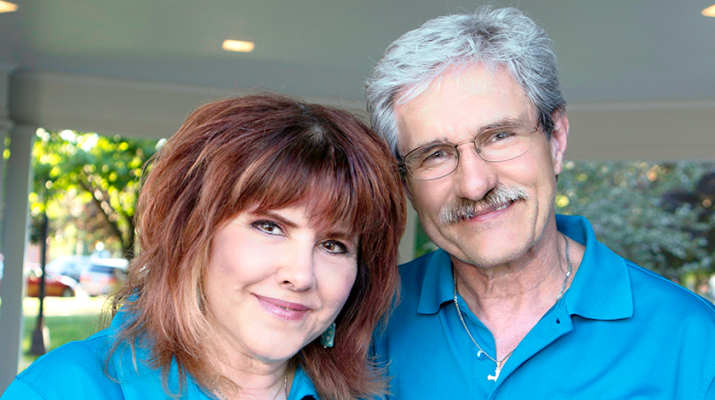 Each October, the color pink lights up the National Grid building in downtown Syracuse for Breast Cancer Awareness Month. Pink ribbons, wristbands, pens, ties and other merchandise are emblazoned with promises to donate proceeds to nonprofits that support breast cancer awareness and research.

But the month before “Pinktober,” Frieda and Gary Weeks douse the community in teal to highlight another, less publicized gynecological cancer — ovarian cancer.

The Weeks family founded Hope for Heather in May 2009 to educate people about ovarian cancer and raise money for research.

Hope for Heather’s flagship fundraiser is the annual Teal Ribbon Run, which takes place Sept. 23 at Lewis Park in Minoa.

In addition to the walk/run, the event features a tent for survivors to gather and share their stories, vendors and health information, raffles and awards for the top race finishers and fundraisers. To date, Hope for Heather has raised $800,000 for ovarian cancer research, patient support programs and more.

This year’s race is dedicated to Mary Gosek, the president of the Oswego chapter of Hope for Heather and a longtime SUNY Oswego computer program analyst. She died from ovarian cancer June 3.

“I don’t want to put any more names on my ‘angel board,’” said Frieda, nodding toward the wall of photos, letters and other mementos dedicated to people who have died of cancer.

The Weeks family’s mission to spread awareness about cancer is personal. Gary is battling recurrent bladder cancer, and the couple’s daughter, Heather, died of colon cancer at age 24.

The vivacious young dancer had worked for what is now the Ovarian Cancer Research Fund Alliance before falling ill with colon cancer, so her parents decided to continue her mission of raising the profile of ovarian cancer.

“She saw a real need that wasn’t being taken care of,” Gary said of his daughter’s work.

After her diagnosis in June 2008, Heather asked her parents if they could have a booth at the Great New York State Fair to spread the word about the symptoms of ovarian cancer. While she didn’t live to see that booth at the 2009 fair — she died Nov. 14, 2008 — her parents kept their promise.

“We didn’t have any money, but we managed to download some information,” Gary recalled. “I built a lemonade-style booth out of a banner and some PVC pipe.”

In addition to raising money for the Ovarian Cancer Research Fund Alliance, which is the world’s largest organization dedicated to researching the disease, Hope for Heather provides support groups for women who are currently undergoing treatment or who have survived ovarian cancer and other illnesses.

A person with a mutation of the BRCA-1 or BRCA-2 genes has a much higher risk of developing ovarian cancer and breast cancer compared to the general population, so the “Positively BRCA” support group is specifically geared toward women with a mutation.

Hope for Heather also supports Heather’s Angel Fund at Upstate Cancer Center, which covers non-medical expenses for ovarian cancer patients. Patients and their families may be traveling from far away to seek treatment in Syracuse, so Heather’s Angel Fund provides them with gift cards for gas, hotels and food, including the hospital cafeteria.

“If we can do one little thing to ease someone’s burden, that’s important to us,” Frieda said.

In addition to the Teal Ribbon Run, Hope for Heather kicked off another initiative for Ovarian Cancer Awareness Month, which began in mid-August. For the fourth year in a row, 30 men from across Central New York are featured on the organization’s Facebook page as “Men of Teal.” Each Man of Teal receives a teal polo shirt and a kit of symptom cards and ribbons to distribute to the women in his life and to every woman he meets.

“We wanted to come up with a way for men to get involved,” Frieda said.

“Once a Man of Teal, always a Man of Teal,” said Frieda, adding that past Men of Teal often return for more awareness supplies even though they’re no longer being officially featured.

“We hope their commitment stays with them every September and throughout the year, because cancer is 365 days a year,” Frieda said.

Gary said his battle with bladder cancer has given him a new perspective on the mission of Hope for Heather and the survivors it serves.

“After going through my treatment, I’m very empathetic,” he said. “I’m much more likely to understand what other people are going through.”

“There’s been a change in Gary,” Frieda said. “He’s always used his voice, but his voice is much larger now.”

Signs and symptoms of ovarian cancer

Many women who are diagnosed with ovarian cancer report the following symptoms:

“These symptoms are very vague,” said Gary Weeks. “Most women have some of them every month with a normal [menstrual] cycle.”

These nonspecific symptoms become a problem if a woman experiences them daily for two or three weeks. Frieda and Gary Weeks encourage women to track their symptoms and to visit a gynecologist if the symptoms don’t go away after a few weeks. Early detection of ovarian cancer is key to improving a patient’s outcome.