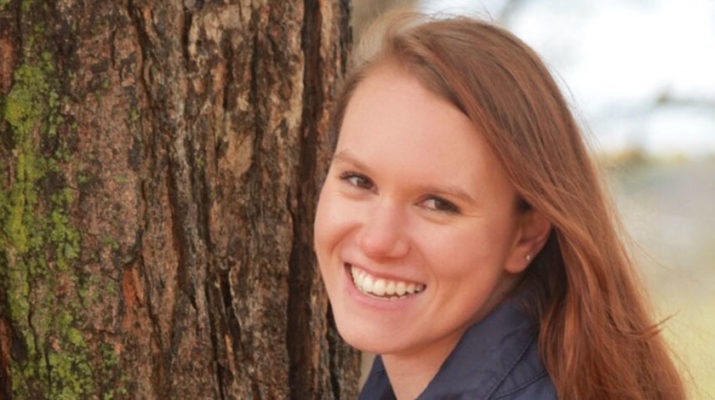 Donated organs are the gift of life

Lucy Reff was only 23 when she died in January of this year due to a colloid cyst in her brain.

Yet, the donations of her organs gave life to others, including a 30-year-old health care professional and a 70-year-old grandmother.

Through a recent phone conversation and subsequent emails, Lucy’s mother, Laura Reff, and her best friend, Jessie Seeger, shared Lucy’s story and the decision to donate her organs.

“As a mom, I never want her to be forgotten or all the good she accomplished in her life,” Laura wrote. “Organ donation was a way for her to live on, and helping someone else is what Lucy was all about. It is in giving that we receive, and Lucy gave the biggest gift.”

Lucy was a quiet person, they said, but the look in her eyes spoke volumes, and they fondly remembered, with a knowing chuckle, her sass.

Lucy had loved the outdoors, riding horses and teaching hip-hop. The Clayton native had worked hard in school and at part-time jobs as a teen. She was a student at SUNY Upstate Medical University in the respiratory therapy department, and was due to graduate in May. She and Seeger had been friends since their days in Girl Scouts. The friends would later become equestrians, showing horses in county fairs and at the New York State Fair for several years.

Lucy was engaged to her longtime boyfriend, Skyler Weston, and the couple was planning to wed in mid-August. She had just chosen her wedding dress a few days before she was hospitalized.

Some time prior, Seeger and Mark, Lucy’s father, had registered as organ donors, and had mentioned it to Lucy and their son, Joshua.

The younger Reffs talked about it later, and thought it was something they would do, Laura said. However, Lucy hadn’t had the opportunity to renew her license after first getting it at the age of 16. A New York state driver’s license is good for eight years, and she hadn’t had the chance to register.

Because Lucy hadn’t registered, once doctors had informed Lucy’s family and loved ones that she was brain dead, Laura, Mark, Joshua, Weston and Seeger discussed it and decided to move ahead with having Lucy’s organs donated.

In Lucy’s case, Laura explained, the brain damage she had suffered caused her organs to shut down. But with the family’s permission, the medical teams were able to administer medication in the hopes that her organs would respond and become worthy to be donated.

Ultimately, her kidneys, liver and heart were usable.

Since then, Laura, Seeger and the others have come to learn more about the statistics and need for organ donations.

“Now that we know the numbers, the need is so huge,” Laura said.

New York state has the third greatest need in the country, but out of the 52 donor registries in each of the states, Puerto Rico, and Washington, D.C., New York ranks 51, according to Nancy Ryan, director of marketing and community relations for the Finger Lakes Donor Recovery Network, a federally designated organ procurement organization.

This agency helps residents in its 20-county coverage area to register for organ donation, as well as assists families at the time of their loved one’s passing to fulfill those “end-of-life wishes,” Ryan added.

While the state’s ranking and the corresponding numbers are “pretty alarming,” Ryan was quick to point out that the state has been making progress in the past several years.

There are a variety of reasons for the increase, Ryan pointed out.

A new electronic online system has been launched, which allows people to register in less than two minutes, Ryan noted.

Furthermore, the question about whether people want to register as an organ-eye-tissue donor is now included in the New York State of Health marketplace.

When people enroll to receive their benefits through the state, Ryan explained, that online enrollment system also includes the question of organ-eye-tissue donation.

Organs of former student at SUNY Upstate Medical University give life to several people, including a 30-year-old health care professional and a 70-year-old grandmother

That information is passed along to the New York State Donate Life Registry. That alone resulted in 206,000 new state residents enrolling, Ryan said.

In addition, young adults, those aged 16 and 17 years old, can now register their intent to donate when they sign up to get their learner’s permits or driver’s licenses.

In the past, they wouldn’t be allowed because they had to be 18 years of age or older. “If something unfortunate was to happen, the parents would have the final determination,” Ryan said. “But it’s giving the young people the opportunity to share the info with their family and let them know what their wishes were as well.”

Ryan also credited donor families like the Reffs, who have shared their stories and told what it means to them that their loved one was able to give these gifts, that their spirit lives on, and that they were able to give others another opportunity at life through organ donation.

There are several obstacles and myths that hinder a person from registering to become an organ donor.

“The most common statements we hear are, ‘I’m too old,’ ‘You wouldn’t want any of my organs,’ or ‘I haven’t led a healthy life,’” Ryan said.

When one registers to be an organ-eye-tissue donor, there are no medical restrictions or age restrictions, except you need to be at least 16 years of age, Ryan explained. Medical professionals at the time of death make those determinations if there are organs and tissues that are healthy enough.

Some people believe that their religion or their faith does not support organ-eye-tissue donation. However, Ryan said most major religions in the United States are supportive of organ donation. For those who are unsure, Ryan suggested they talk with their faith leaders and primary care physicians.

Ryan said there is another significant fear for people in making the decision. Many believe if they register to become an organ donor and then find themselves in an emergency department or a critical care setting, doctors and nurses won’t try that hard to save their lives if they know that they’re registered organ donors.

That is a myth, Ryan said.

The medical personnel in the ER don’t have access to the registry, Ryan pointed out, so they have no way of knowing if someone is even a registered donor.

“Frankly, what’s most important in their mind is to save your life,” she said.

Medical teams in hospitals have been trained to deal with patients who have been admitted in critical condition and rely on mechanical ventilation to keep the heart beating and blood flowing.

The Finger Lakes Donor Recovery Network has agreements in its service areas with 37 critical care and critical access hospitals. Those hospitals’ staff members are trained to call and notify them that they have a patient who is meeting clinical triggers for organ donation.

“We then respond directly to the hospital and begin working with the medical teams and eventually speaking with the family that their loved one could give the gift of life,” Ryan noted.

The network has been crucial to Lucy’s loved throughout the past few months, offering them guidance and emotional support.

As the Reffs and Weston approached what would have been his wedding day in August, they were planning at Weston’s suggestion to spend the day celebrating Lucy’s life.

And also remembering the lives she saved.

How to Become a Donor

To learn more about organ donation and how to register, visit the Finger Lakes Donor Recovery Network at http://www.donorrecovery.org/ or Donate Life at https://www.donatelife.net.