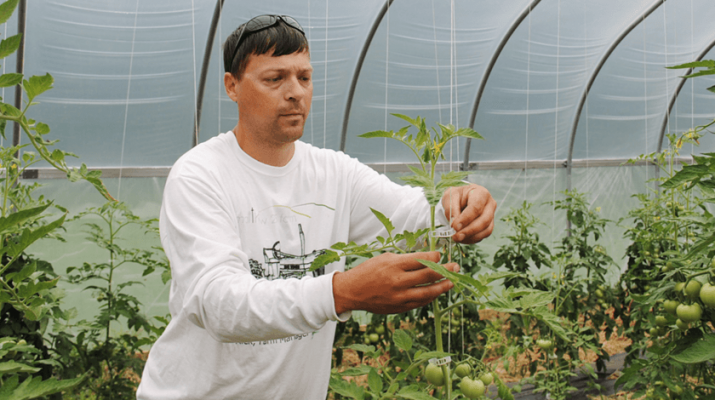 Volunteers do the planting and harvesting; food is donated to food pantries, soup kitchens and families in need

The Matthew 25 Farm, with two locations on the southern edge of Onondaga County, has been harvesting food and goodwill for people in need for more than a decade.

Its sites in Vesper-Tully and Cardiff-LaFayette produce 50,000 pounds of fruits and vegetables annually, all of which are planted and then picked by volunteers and a small staff and donated to food pantries, soup kitchens and families in need throughout the Central New York, according to Rick Rarick, manager of the nonprofit farm.

With the addition of two “hoop houses” at the Vesper/Tully location, they can extend their growing season, having vegetables into late fall.

Currently, they are growing tomatoes and cucumbers in these houses, which are arched structures covered with greenhouse plastic and closed at either end, and are often less expensive to construct than greenhouses.

Volunteers come from all over the area, including Scout troops, colleges, and church and civic organizations. Members offer their time to work on the farm as a service project.

Individual families in need can also come and pick at the farm. However, Rarick said there is a 50% rule. For example, if a family picks 10 pounds of potatoes for themselves, they will be asked to pick an additional 10 pounds to leave at the farm for a food pantry to pick up.

Often, he said, those who harvest for themselves and their neighbors will end up picking far more than the 50 percent that they keep.

One of the largest corps of volunteers is from the parish of St. Charles-St. Ann’s Youth Ministry in Syracuse.

Terri Condon, program director, learned about The Matthew 25 Farm from a newspaper article years ago, and she’s been involved ever since.

When she first became acquainted with the farm, she was working at St. Cecilia’s Church in Solvay, and she got parishioners there to join her. She spearheaded fundraising efforts at the church to purchase 100 apple trees, which had been one of the farm’s “wish list” items.

Not only did they purchase the trees, they helped to plant them too. Since then, the farm has named the area the St. Cecilia’s Orchard. And along with the apples, that particular area boasts some raspberry plants as well.

“When you pick a service project for your teenagers, it has to be something, as far as I’m concerned, that’s life-changing,” Condon said.

“They are amazed that if they stick a seed in the ground and come back in several weeks, it’s full of zucchini. And the kids love to get into the dirt,” she said, chuckling.

The best part of the service project, Condon said, is that after they pick the produce, they deliver it directly to the food pantries at St. Lucy’s and Assumption churches on Syracuse’s near westside and northside, respectively, as well as their own pantry at St. Charles-St. Ann’s. “The kids get to see the full circle of doing the work and then where it needs to go,” she said.

Some of the other facilities benefitting from the farm’s fruits and vegetables include Isaiah’s Table and the Samaritan Center in Syracuse, PEACE, Grace Episcopal in Cortland, Groton Assembly of God, and the Locke Food Pantry.

The farm was established in 2009 with no land and little or no money, but a big dream.

While Rick Rarick is manager now, the idea to develop the farm had actually come from his brother, Jeffrey Rarick.

He felt it is a calling from the Lord to do it, according to Rick.

Within a few months, money had been donated, tractors were coming in, land was purchased, and “we were off and running,” Rick said.

The farm’s name comes from Chapter 25 in Mark’s Gospel in scripture, which includes the passage, “for I was hungry and you gave me food.”

During the farm’s second year, Jeff got married and continued pursuing an engineering degree. So, Rick stepped in and took over as manager.

Their mother, Elizabeth Esmark, is the farm administrator. She writes the grants that help fund the farm and runs an antique shop called Vere Vintage at the farm’s LaFayette location, which further supports their efforts.

As a nonprofit, a board of trustees runs the farm. Assisting them during the growing season, in addition to volunteers, are Brad Clarry and Katie Markstein.

Funding for the farm comes for a variety of sources, including donations from individuals and some churches, bottle and can drives and the annual harvest golf tournament, which is being held on Aug. 17 at the Sunset Ridge Golf Course, on West Seneca Turnpike in Marcellus. The farm has also received grants from such organizations as the Syracuse Rotary Foundation, the Central New York Community Foundation, the Wallbridge Fund and the Welch-Allyn Foundation.

Rick Rarick attributes much of the farm’s longevity to the faith of its board members and their willingness to help people.

There were some people at the beginning who didn’t think they would last longer than two or three years, Rarick said. “Here we are in year 11 and going strong, and we’re looking forward to and making plans for year 12 already,” he said.

Those interested in learning more about the farm and how to volunteer can visit www.matthew25farm.com or call 315-558-2212.

Photo: Rick Rarick is the manager of the nonprofit Matthew 25 Farm. “Here we are in year 11 and going strong, and we’re looking forward to and making plans for year 12 already,” he says.