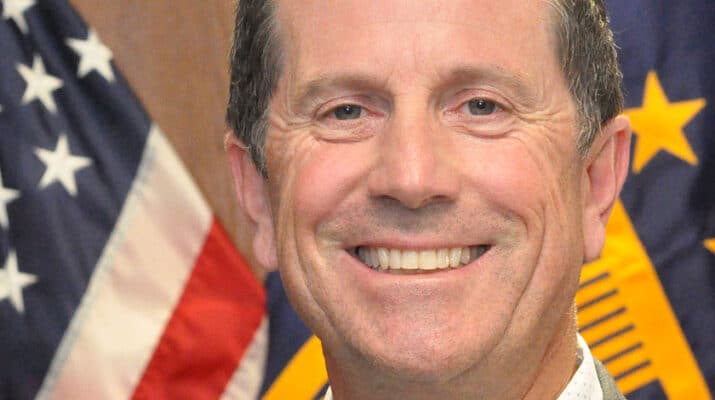 Taking over the position amid the pandemic, new leader adjusts VA to  continue services to patients

The past few months have been marked by change for Frank Pearson, a doctor of physical therapy and a certified physician assistan.

Named as the director of the Syracuse VA Medical Center in August, he moved to Syracuse from California, taking over in the midst of the COVID-19 pandemic.  And it’s change — a positive change — that Pearson sees himself bringing to the medical facility.

“I found the culture was right, where I could make positive change and have an effect,” he said.

When he came to the Syracuse VAMC in August, the country was about four months into the pandemic, and within a few short months, the next surge hit.

“We had to think outside of the box. We have an extremely talented leadership team throughout the entire facility who always rose to the occasion. And, we had to adapt to different scenarios,” he said. He also praised the efforts of the nursing and facilities team, who adapted and created rooms to accommodate the increased number of patients.

The Syracuse staff, he pointed out, has also been helping to carry out the VA’s fourth mission, which is   to “improve the nation’s preparedness for response to war, terrorism, national emergencies and national disasters by developing plans and taking actions to ensure continued service to veterans, as well as to support national, state and local emergency management, public health, safety and homeland security efforts.” The other three missions are health care, veterans’ benefits and national cemeteries.

He explained they have sent nurses, physicians and other medical support teams to assist other facilities throughout the nation that have been coping with the pandemic and natural disasters, like floods and hurricanes, that have devastated certain parts of the country. Staff is also assisting in mass vaccination clinics all over the United States.

Over the past several months, the Syracuse facility has been offering its own vaccination clinic in its parking garage, allowing vets to receive their shots without ever leaving their vehicles. When the temperature of the clinic’s first weekend didn’t even reach 15 degrees, Pearson had suggested to the staff that they move the program inside. They immediately declined, telling him that although they might feel the cold a little bit, they were energized by the respect and the dignity of the veterans.

“I couldn’t be more proud of the staff I’m privileged to lead here,” he said.

The challenges from COVID-19 have been among the greatest Pearson said he’s faced since taking over. However, he believes that they’ve also allowed the facility to assess how they provide health care. Adapting to virtual visits and getting the technologies to their patients, especially those living in rural areas or those who don’t have access, have caused some difficulties. But, he sees telehealth as an opportunity for health care and communications, and physicians are able to speak with and see their patients more frequently as needed.

He said his responsibilities as director are typical of a hospital CEO, except for its patient base, “caring for America’s veterans.”

The facility on Irving Avenue is much more than a 189-bed medical and surgical referral center. It also includes a 16-bed acute psychiatric unit; a 46-bed community living center where veterans come to live at the facility; and a 30-bed spinal cord injury center, a $90 million project that opened in 2013. Moreover, it provides a broad spectrum of services for the 50,000 eligible veterans in the 14-county area it serves, such as primary, vision and audiology care; mental health; long-term care; physical medicine and rehab; urology; oncology; dentistry; and geriatrics. It also operates community-based outpatient clinics in Massena, Watertown, Auburn, Rome, Oswego, Binghamton and Tompkins-Cortland in Freeville. It partners with vet centers in Syracuse, Binghamton and Watertown. It leases space at Fort Drum for physical therapy for veterans in that area. It’s also affiliated SUNY Upstate Medical University.

Because the healthcare system is funded via federal channels, Pearson said, “Congress has the right and the responsibility to look in at all times for the welfare of the veterans. That’s a tremendous undertaking and it’s a privilege to serve in this role.”

It’s this transparency that appealed to Pearson in making his decision to take the director’s position at the VA.

“One of the beauties about the Veterans Administration is that they’re extremely transparent. If you go online, you can see our metrics and our performance. I was able to do a lot of homework and see we what we’re doing here as an institution,” he said.

Retiring in 2019 as a U.S. Navy Captain, Pearson, 58, had been the Chief Executive Officer at the Naval Hospital Camp Pendleton in California.  Prior to that, he had been Chief Operating Officer of Naval Hospital Pensacola in Pensacola, Florida, and Chief Operating Officer of Naval Medical Center in San Diego, California.  He earned both his doctorate degree and master’s degree in physical therapy from Baylor University and a master’s degree in Physician Assistant Studies from A.T. Still University’s Arizona School of Health Sciences.

He had been retired for about a year before taking the job here in Syracuse. Although the native Californian first interviewed for the Syracuse job on a day in February of 2020, when, he said, it snowed about a foot, he didn’t retract his application. He looks forward to enjoying some of the attractions of Central New York area. He’s not a complete stranger to winter weather, having done undergraduate work at the Rochester Institute of Technology. And while he can still enjoy one of passions, golf, here, he said that he’ll just dream about surfing.