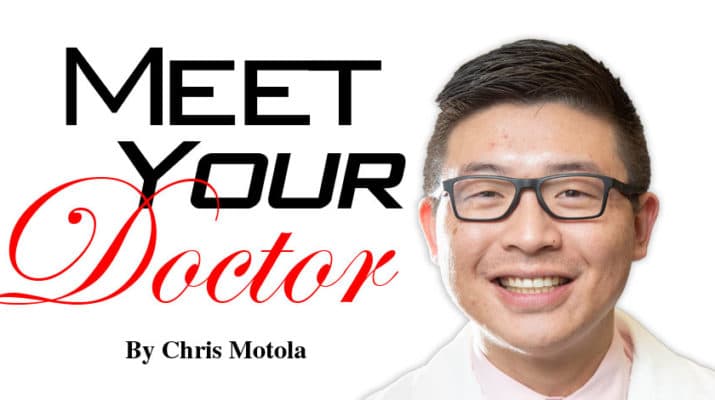 Q: You’re currently in a bit of a transitional role at Auburn Community Hospital.

Q: What attracted you to Auburn Community Hospital?

A: I have to say I really like the people. Coming here, meeting the team running the hospital. Everyone’s so nice and dedicated to patient care. There’s the fact that within several counties, they’re the main hospital, which is a big responsibility that they take seriously. For me, it was a really good learning opportunity coming from a larger institution that’s very bureaucratic, with a lot of tasks that were subdivided. Here, being the deputy chief medical officer, you have a lot more responsibility on your plate. You manage a lot of things on an operational scale from day to day.

Q: One of your areas of focus is on efficiency. What inefficiencies do you commonly run into in hospitals?

A: Previously at Yale I was the physician lead for clinical optimization. What that means is we were an internal consulting group. We’d go from clinic to clinic looking at their various policies, and how they were taking care of patients. We took a lot of data and tried to improve it. Over six months, we worked with clinical staff and leadership to try to make things a little bit better. From a hospital standpoint, there are a lot of inefficiencies on a day-to-day basis. So anytime you have a delayed test or a patient who was told something was going to get done but they get bumped, those things can be frustrating for patients, but also from an operating standpoint. We want to make sure patients are getting the most efficient care that they can receive.

Q: You also have done a lot of work concerning faculty and staff burnout. How big an issue is burnout, and how do you address it in a work culture where, for example, residents brag about not sleeping for days on end?

A: [laughs] You get used to working without sleep! Actually, burnout on the whole is one of the main things that got me interested in going into healthcare management. During my second year of residency, I thought being a provider would make people happy, but what I noticed working in a hospital is that many times the providers, the nursing staff, and the people working with patients weren’t happy. That made me want to go into healthcare management and to create a work environment that is dedicated to not only taking care of patients, but also the providers. And it’s my opinion that happy providers will do a better job of taking care of patients. People who really want to come to work and do the things you set out to do in your career.

Q: How do you go about that?

A: In terms of solving burnout, I think it’s all about creating culture. A lot of hospital work is going to be the same from location to location, but having a culture where the administration really cares about each provider and tries to make their day go as smooth as possible makes a big difference.

Q: Where do you see telehealth fitting into the picture?

A: I was the medical director of telehealth at Yale. It was tough. Connecticut actually has a really strict telemedicine law and [is strict about] which providers can get credentialed. There are a lot of reimbursement issues. The exciting thing about telemedicine is that it’s definitely the frontier of medicine. Having patients travel two to three hours to see you, parking, taking time off from work, finding a babysitter; instead they can just stay home and see their provider from there. Telemedicine was difficult to implement in Connecticut, but Auburn being a rural hospital with patients who travel from far away mean there are a lot of possibilities for telemedicine here. It’s something we hope to work on in the medium-term over the next several years.

Q: Do you still practice neurology as well?

A: Yes. I’m a general neurologist, so I see lots of different types of patients, from stroke, to MS, Parkinson’s disease, seizures. I see them both in an outpatient setting and through doing inpatient consulting as well.

Q: Did your knowledge of neurology help address burnout issues?

A: I definitely think so. From a physician standpoint, a lot of doctors want to see that administrators know what they’re going through. So, I think it’s really important to continue the practice of medicine. As soon as you stop practicing medicine as an administrator, you kind of lose touch with what it means to be a doctor. In order to promote a good culture you need to be able to see it from a doctor’s perspective as well.

Q: You’re on the young side for an administrator. Are there any challenges or advantages that come with that?

A: [laughs] The answer is yes. I’m 32. This happened at Yale too, when I was the director of telemedicine. People can be surprised that the person overseeing all that is so young. It was initially kind of scary for me, being the youngest person in the room. It made me want to be absolutely sure what I said was 100% correct, and sometimes that led me to not talking as much as I needed to. So, I had to push through that fear and put myself out there. I think the case is the same at Auburn, but people have been really nice here. As long as I’m contributing positively, I don’t think it’s that much of an issue.

Hobbies: Basketball, soccer, hiking, planning to get into cross-country skiing