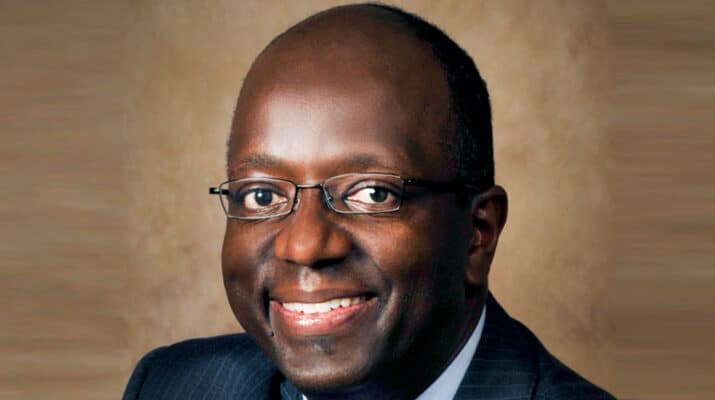 Mark Muthumbi is taking the helm at Excellus BlueCross BlueShield in CNY in the middle of the coronavirus pandemic. He talks about his career and his goal to keep the nonprofit a leader in the market

Things were much simpler when Mark Muthumbi first set his sights on a sales career.

First, complete a college business degree. Second, find a place where there were jobs in the field. Third, find a company with shared values that sells a product you believe in. Fourth, work hard and maybe you can move up in the company and try to stay in the same place for a while.

Fast forward three decades, and the numbers are astounding: Muthumbi is now in charge of 850 employees in the Syracuse region, and is part of a leadership team that manages more than $6 billion in revenue to cover 1.5 million members across Upstate New York.

And yet, Muthumbi says, “the time flies by if you are doing something you enjoy.”

Muthumbi began his career 21 years ago at an entry level position with a company that was later acquired by the organization that evolved into Excellus. His first job was selling HMO plans for a company called Prepaid Health Plan.

“I sent out a ton of resumes, and that was where I ended up,” recalled Muthumbi, who earned a bachelor’s degree from Liberty University in Virginia. His spouse-to-be was from the Syracuse area, so it seemed like a good fit.

“I only had one widget to sell,” he said. “It was pretty straightforward.”

After the Central New York market was merged into the BlueCross BlueShield company in 2000, Mathumbi’s role as an account manager was expanded to include sales of several different products. He enjoyed the challenge, and earned a position at the national account level. While taking on tougher assignments, he challenged himself further by enrolling in Le Moyne College’s MBA program, graduating in 2003.

“I actually loved taking all of that on,” he said. “I knew I wanted to be in management.”

With advanced degree in hand, Muthumbi was promoted to supervisory positions at Excellus and remained focused on getting to the top. By then, he had no interest in leaving the organization, even for opportunities in bigger markets or warmer climates. During college, he had considered pursuing a career in Washington, D.C., New York City or Atlanta.

“It didn’t take long to recognize the quality of life here,” he said. “Traffic is not a problem — I can get to my son’s games. We have nature, outdoors, lakes, camping. And you make great friendships in small communities.”

Muthumbi has held five different positions with the company so far. He credits Excellus for fostering career development and making it possible for employees to further their education. He also appreciates that Excellus is a nonprofit, mission-based organization, where there are “members” instead of customers or beneficiaries.

Excellus has maintained a 2% profit margin in the past 20 years and, as a nonprofit, those revenues are used to keep member costs down. The company maintains about $3.7 billion in assets, with about 88 days’ worth of claims and operating expenses, or $1,293 per member, at all times. Administrative costs amount to about $47.11 per member, compared to an average of $68.08 per member for other plans in Upstate New York, according to the company’s website.

All told, Excellus employs more than 3,600 workers in the Rochester, Syracuse, Utica, Southern Tier and Western New York regions. It partners with 86 hospitals with a 99% participation rate of physicians in its coverage area — 2,737 primary care physicians and 13,798 specialists or ancillary providers.

“The company is still a market leader,” Muthumbi said, “but we are a mission-based organization. That keeps us all grounded, myself included.”

The biggest change Muthumbi has witnessed is the ever-increasing cost of health care, which obviously makes his job very challenging. He has also seen major advances in medical technology that has led to outpatient or same day surgeries becoming commonplace. In addition, the pharmaceutical side of health insurance has grown astronomically.

And of course, in Central New York and across the country, the health care and medical insurance industry continues to see mergers, consolidations and acquisitions of companies and facilities.

One of the most positive changes Muthumbi has been part of is the lowering of Upstate New York’s uninsured population, which is about 3.5% and substantially lower than it was five years ago, Muthumbi added. It is also less than half of the national rate of uninsured Americans.

The new regional president said he is especially proud of the longevity of his staff. The career length for Excellus staffers is averaging between 16 and 20 years, Muthumbi says, and he knows some employees who recently marked their 30th, 40th and 45th anniversaries. Companywide, Excellus employees contributed 10,714 volunteer hours in their respective communities in 2018, according to the Excellus website.

Muthumbi, a recipient of BizEventz 40 under 40 Award and a graduate of Leadership Greater Syracuse, hopes to get to know as many of Excellus employees as possible in the years to come. He also wants to continue to cultivate strong relationships, especially with commercial members. With COVID-19 concerns and continued efforts to keep health care affordable when the unemployment rate in increasing, the new leader is taking the helm during very trying times. He says he’s ready for the challenge.

“Every day is different, which is exciting, but the question for me remains the same: How do we continue to be a leader in this space?”

When he is not working, Muthumbi enjoys following Syracuse University sports, playing chess and mountain biking. He averages 12 to 15 miles per trip, and aspires to eventually ride the length of the Erie Canal path from Buffalo to Vermont.

The Baldwinsville resident also enjoys spending time with family and travelling; he has been to Africa, Europe and other locations. This past summer, he has been involved with his son’s scouting activities. He has also taken up golf and corn hole.

“These are two games that I’m really starting to enjoy,” he said with a laugh, “but I will not claim to be good at them!”