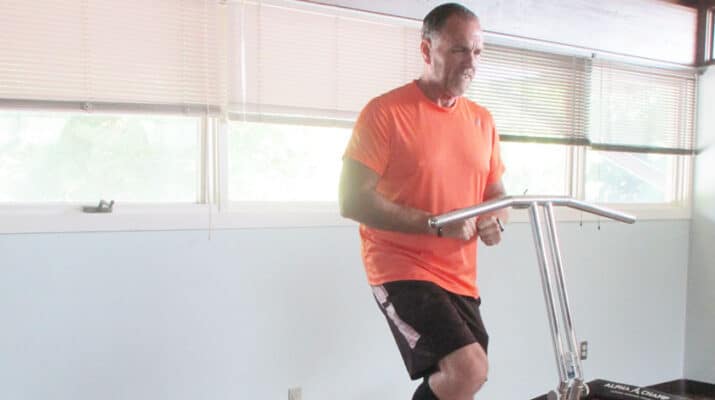 Baldwinsville trainer travels the world helping people with Parkinson’s and other neuro-muscular diseases. He just published his first book

Karl Sterling had no idea how much his life would change by simply having coffee with his economics professor.

He and Jerry Evensky, a professor at Syracuse University, shared a beverage one day and Evensky — who had been diagnosed with Parkinson’s disease — told Sterling he was looking for a personal trainer to help with some physical issues.

Sterling happened to be a trainer and began working with Evensky.

Today, Sterling, 59, has expanded on his work with Evensky to become a neuro-rehabilitation specialist, traveling the world to help people with Parkinson’s disease and other neuro muscular diseases (such as multiple sclerosis and Guillain-Barre) live better and longer lives.

He recently published his first book, titled “Parkinson’s Regeneration Training.” The book goes through the process of how he developed his work, what the training entails and how it helps people throughout the world.

This is a stretch from his earlier adulthood, spending about 20 years as a drummer in a band. “I was at OCC [Onondaga Community College] for two years studying music, but then I stopped college,” he said. “Then I got a lot of work for a long time as a drummer.”

He performed gigs throughout the United States, opened for Spyro Gyra and Dizzy Gillespie and worked with The Drifters. Sterling said after a while he tried teaching drumming, but wasn’t very good at it.

During his years of late-night gigs, he watched a lot of early morning TV and saw an infomercial about real estate investing. The infomercial said people could buy houses with no money down, fix them and sell them for a profit.

From there, he got his real estate license and worked with a large real estate company in Syracuse. “I did quite well for a few years,” he writes in his book. “However, it didn’t take long to realize that people were generally not too happy in any real estate transaction. It was a lot of work for what seemed to be very little gratification for anyone.”

He also wasn’t at all gratified with what happened to his body during these years. He found himself terribly out of shape and overweight.

“I went to the doctor and I had high blood pressure and was close to having COPD [chronic obstructive pulmonary disease],” Sterling said. “I was scared. I called a trainer from the parking lot and next year, I was 70 pounds lighter.”

So that health scare brought about his second career change. After working with the trainer and getting in shape, he decided he wanted to study nutrition and become a trainer too.

“I had always wanted to help people,” he said.

Sterling got his personal training certification from the National Academy of Sports Medicine. He was working primarily with people who had weight management issues when he decided to expand his reach.

“I was bored. I needed to widen my scope of practice,” he said.

So, he enrolled at Syracuse University in the nutrition program. And during an economics class, he met Jerry Evensky.

“After Jerry came to me, I started researching,” Sterling said. “I talked to neurologists, physical therapists. I always found I was the least knowledgeable person in the room.”

Through his research, he found that difficulties often suffered by people with Parkinson’s and similar diseases could be helped through exercise. But not just exercising leg or arm or core muscles.

“I deal with waking up the brain through the nervous system,” he said.

In the new book, he touches on a number of aspects of Parkinson’s and his work. And he admits early on in his writing that new research and clues about Parkinson’s are being discovered every day, but he had to draw a line and end the book at its 482 pages or the book never would have been completed (he worked on it for two years).

Here are some of the items touched on in the book:

• Sterling said one of the primary difficulties in Parkinson’s patients is balance. He works on various multitasking exercises that stimulate the brain while the patient is walking or standing to improve their balance.

For instance, Evensky – 71, of DeWitt and now retired from SU — does exercises that involve walking and going up and down curbs while also catching and tossing a ball.

“I have to use my brain — it’s multi-stimulation,” Evensky said.

The key, he said, is repetition. “If you start to fall, your muscle memory kicks in and keeps you from falling,” Evensky said. “We do various exercises to work on that.”

“We train to do dual tasking to prevent falls,” Sterling said.

Balance is key to keep people from falling, which Sterling said is one of the top causes in leading to death in Parkinson’s patients.

• Exercising the brain. In chapter five, he talks about “The Amazing Brain” and how exercise can help it function.

“When we think of exercising, we generally think about building muscle, improving balance and cardiovascular health and maybe adding in some flexibility,” he writes. “But what if I tell you that targeting the brain is at the very top of the list when it comes to helping to slow disease progression and more effectively manage disease symptoms?”

Parkinson’s disease has no cure, but Sterling teaches that exercising the brain can help people live a better quality of life by slowing the disease and managing the symptoms.

Balance, rolling over, akinesia (not being able to move because it feels like your feet are glued to the floor) and tremors are all addressed in Sterling’s book. Throughout the book, Sterling has included first-person writings from Parkinson’s sufferers, who discuss how the disease appeared in them, how it was diagnosed and how exercise is helping.

For example, Claire McManus of Ireland was just 19 when she began noticing symptoms. She developed toe tremors, fatigue and stiffening legs affecting her walk. Then more parts of her body developed tremors, her walk became nothing but a shuffle and she actually had to think hard when it came to taking steps or stopping.

She wrote that working with Sterling helped her learn “great tips and so much more on how to keep fresh on my feet.”

Evensky also writes about his Parkinson’s experience in the book.

• Cognitive exercises. Sterling also writes about exercises for just the brain, without any physical component. These include learning various word lists and memory tests.

“Exercise causes the creation of a multitude of chemicals and hormones that benefit our brain and help to slow disease progression …” he writes. “Cognitive training without movement can help to create neural pathways in the brain and help to improve cognition. And cognitive training during focused movement and paired with visual system activation and hand-eye coordination will activate the deeper brain and create additional neural firing pathways.”

Sterling has a second book coming out in November that will include inspirational stories of people with Parkinson’s, doctors who treat them and caregivers who take care of them.

“We have to treat the body as a whole,” Sterling said. “That takes learning about all the systems in the body.

• www.thepdbook.org for video lectures and demonstrations that go with the book

• Find a workshop at www.parkinsonsregenerationtraining.com

• Order the book at www.thepdbook.com

• Order a CD and sign up for live streaming workshops at www.dreamcd.org

Photo: Karl Sterling demonstrates a piece of equipment he uses at his Camillus office. A person can bounce on the small circular trampolines with one foot or two and bounce between them to improve balance. (Photo by Debra J. Groom)