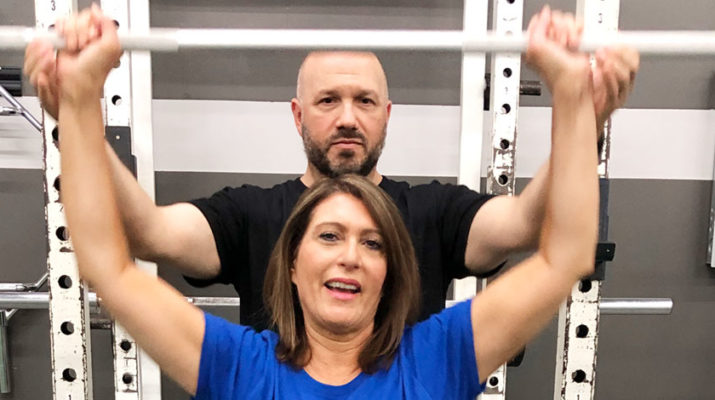 “I’m terrified,’’ anchorwoman Christie Casciano told NewsChannel 9 viewers a day before her surgery. By the next afternoon, she was walking with the assistance of a physical therapist and a walker

Christie Casciano calls herself  “the poster child for hip replacement.’’ The veteran anchor and reporter for WSYR-TV (NewsChannel 9) has undergone two total hip replacement procedures this year and says she feels like a new, “bionic” woman.

Recuperation from each procedure kept Casciano off the air for several weeks — and brought a flood of flowers and encouraging words from viewers. She’s still gaining her strength back and has graduated from physical therapy to one-on-one strength and conditioning sessions with trainer and coach Mike Derecola at Strides in Syracuse.

On a recent weekday, Casciano showed up at the facility with energy and enthusiasm, wearing a cobalt blue T-shirt that reads, “The Bionic Hip Club, With Custom Parts.”

“I feel good. I’m doing better. I’m that classic story of I wish I had done it sooner,’’ Casciano said with a smile.

Casciano has worked at NewsChannel 9 for 30 years. She anchors or co-anchors the weekday news at 4, 5, 5:30, 6 and 11 p.m. and created the popular “On the Lookout” franchise, a partnership with local law enforcement agencies that has helped officials solve hundreds of crime cases. She has written several hockey-themed books for children and teamed with NewsChannel 9 colleagues Lou Gulino and Tim Fox to write the book “Syracuse Television History.”

Casciano is also a dedicated hockey parent with a passion for figure skating and dancing. If you watch NewsChannel 9 regularly, you know that she is fit, active and adventurous. As part of her reporting, she has climbed into police cars and cockpits and accompanied DEA officials on raids.

She didn’t arrive easily at the decision to have total hip replacement surgeries. Casciano, who is in her 50s, has lived with hip pain caused by arthritis for years. She tried strength training exercises, anti-inflammatory medications and cortisone shots — all of which helped, but only for a short time, she says.

When her hip pain became intense, she started using a cane, which helped to relieve some of the weight-bearing issues she was having. She said she was sitting next to a fire in Ottawa drinking hot cocoa (and not out on the city’s famed Rideau Canal Skateway) when she accepted that surgery was her only remaining option. “I want my life back,’’ she thought. “I want to do things again. I’m so limited. It’s time.’’

According to the Agency for Healthcare Research and Quality, more than 300,000 total hip replacements are performed each year in the United States.

Improvements in joint replacement surgical techniques and technology have increased the effectiveness of the surgery and made the procedures more common — and not just for senior citizens and the elderly. Patients can expect their new hips to last 20 years or more.

Eventually, Casciano made an appointment with orthopedic surgeon Stephen Bogosian of Syracuse Orthopedic Specialists. X-rays revealed extensive cartilage loss in the hip areas, which was causing her bone-on-bone pain. Seeing is believing and when it became clear that surgery could bring both immediate and lasting relief, Casciano signed on for the first of two total hip replacements.

In a news segment with Bogosian the evening before her first surgery, in early March, Casciano told viewers she would be off the air for a few weeks.

“Arthritis has taken hold and these hips don’t lie,’’ she said, noting that she’s in good hands and company because Bogosian performs six to eight knee and hip replacement surgeries in a day.

Hip replacement has shed its image as surgery for your grandparents, Bogosian noted. “We’re doing total hip replacement surgeries on 50 – 40-year-olds and sometimes even 30-year-olds,’’ he said. “Age is not as big a factor as it was before.’’

“I’m terrified,’’ she told NewsChannel 9 viewers. But by the next afternoon, Casciano was walking with the assistance of a physical therapist and a walker. She returned to the anchor desk on March 26, slowly walking into the newsroom using her cane. She had her second hip procedure in late June and returned to work on July 17. She says the procedure — and recovery from it — was easier the second time around.

Casciano is looking forward to traveling this fall and winter to watch her daughter play ice hockey for St. Michael’s College in Vermont and hopes to resume some “easy ice skating’’ this season. Shortly after returning to work at NewsChannel 9 after her second surgery, Casciano covered a story on local law enforcement officials training for an active shooter scenario.

“It was great to be back in the field,’’ she says. “I wouldn’t have been able to do that before my surgery.’’