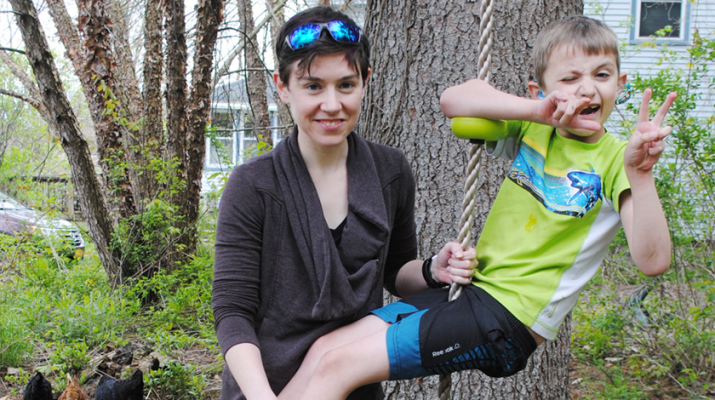 Joel Yaichuk is so much like other 7 year olds.

He enjoys playing in the yard at his home in Phoenix, climbing rope swings and playing video games with his brother, Lincoln, 4.

But unlike so many kids his age, he can’t always enjoy visits to zoos or facilities where there is a lot of noise in the background.

Joel wears hearing aids and has been diagnosed with mild-moderate hearing loss, according to his mother, Rosemary “Rosie” Yaichuk. He can’t hear certain word sounds or certain frequencies.

“I shouldn’t have hearing loss,” Joel said, pointing out that only one in 800 children is hard of hearing.

Statistics from the National Institute on Deafness and Other Communication Disorders show Joel is very close with his numbers. The organization reports about two or three out of every 1,000 children in the United States are born with a detectable level of hearing loss in one or both ears.

Since he was diagnosed about two years ago, Joel and his parents, Rosie and Brian, have experienced a host of struggles.

“One of the biggest challenges is that nobody else really knows what it’s like,” Joel said. “It’s a part of who I am, I know that.”

While he has hearing aids and a special system in school to help him better understand his teachers, the first-grader still finds difficulty in certain environments where there might be a lot of ambient noise with certain frequencies and certain types of voices, his mother explained.

Joel had his first ear infection at the age of 4, and a short time after that, Yaichuk said, she started to notice that he didn’t seem to be listening to her or he could hear her only if he was looking at her.

Ultimately, she said, it was determined that he had mild to moderate loss, and it was in both ears.

When he was identified, he was still in preschool, but when he started kindergarten, Yaichuk said, it became obvious that she needed a little bit more help.

A mutual friend involved in a deaf and hard-of-hearing nonprofit group in Michigan encouraged that the family and Joel get involved in the deaf community locally so he could see other children who are wearing hearing aids and people who are signing. This would make him realize he’s not alone.

At first Yaichuk was hesitant, she said, but eventually she found WHOLE ME, Inc., in Syracuse through an internet search.

“I put on my big-girl pants and reached out to them,” she said.

In the program now for a little over a year, the Yaichuks have found a wealth of resources that have not only helped Joel, but proven beneficial to the whole family.

In talking with WHOLE ME’s Executive Director Chris Kovar, Yaichuk said she realized immediately it was what her family needed, and it would help her to appreciate Joel’s needs and differentiate what might be critical and what’s not.

Kovar helped to establish WHOLE ME in 2003. She has been in deaf education for 40 years. While working in a deaf and hard-of-hearing program at BOCES in the early 1980s, she and several co-workers started to develop some after-school activities for their students.

Those attending the BOCES program were coming from Onondaga, Cortland and Madison counties, so when they would go home at the end of the school day, they really didn’t know the kids in their own neighborhoods, Kovar explained.

If they are the only ones who are deaf or hard-of-hearing, it’s difficult for them to go to a playground and interact with the other children. So, they would often go home and retreat to their rooms. Kovar hoped the after-school activities she and her team were organizing would provide more socialization opportunities.

Learning American Sign Language, or ASL, is a totally different language with its own structure, syntax and grammar, she said.

“It’s a true language in and of itself. The kids have to learn that because that’s their language, but they also have to learn English,’ Kovar said. “They need to learn how their sign language compares to the written word that they see on a test.

“The kids will read a book in English, and then do it in sign language, or do it in ASL and learn how to do it in English.”

WHOLE ME includes a child’s whole family in learning, and Kovar estimates they have 50 to 60 families in their program.

“We don’t just take the kids in isolation and teach them sign language. We teach the whole family because they need to talk to somebody. So it’s really important for families too,” Kovar said.

For the Yaichuks, learning ASL has become truly a family affair, including not only Rosie and Brian, but also brother Lincoln, and even Rosie’s parents.

“What determines the success of a child with hearing loss is the family’s involvement,” she said.

But their programs are not just geared to children and families. They can provide programs for high school students who are moving on to college or the workforce or college students as they prepare for their careers.

The organization also provides interpreter referral services for people and agencies in the area.

They also established a Deaf Women’s Support Group in 2018, with assistance from the Women’s Fund of the Central New York Community Foundation.

The women, Kovar noted, come from all walks of life and levels of education. “It’s a group of women who really support and take care of each other,” she said.

The CNY Community Foundation, too, recently awarded WHOLE ME with a grant of more than $35,000 to enable the organization to further expand its afterschool program in collaboration with the Syracuse City School District.

The funding will also help the organization increase the public’s awareness of what it does, and it will assist with some of the additional costs associated with taking on more students as the programs grow, according to Danielle Gill, director of grants and programs for The Community Foundation.

To learn more about the organization and its services, visit www.wholemeinc.com.