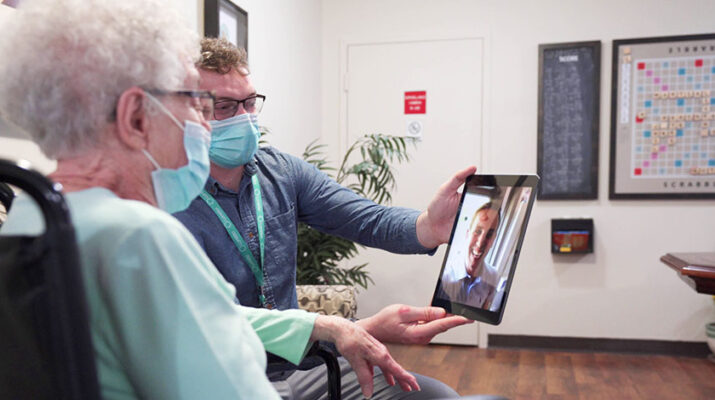 New techonolgy has enabled senior facilities to connect their residents with their families and friends. Some residents can even attend church by streaming it on iPads or similar equipment.

Prior to the pandemic, Linda Brown said her family had a “great thing going” to ensure that she or one of her six siblings were in touch with their mother, Roslyn Antonacci, every day.

Antonacci, who recently turned 90, is a resident at Loretto’s Sedgwick Heights assisted living facility. If someone couldn’t visit her in person, then at the very least, Antonacci could expect a call. But the priority for Brown and her siblings was always taking their mother off campus for activities, like the occasional meal.

“She loves getting social time with her family and getting outdoors,” Brown said. “She had crazy quirks, like she loved waffles and we couldn’t get them at the facility. So, I would take her out to breakfast to little diners, go have a waffle, you know, the little things meant the world to her.”

These excursions, however, soon came to an abrupt end as did all in-person visits from the family. New York state shut down visitor access to nursing and other long-term care facilities in March 2020 and didn’t end up easing visitor restrictions until months later. Even then, many families were unable to get around the regulations. It was a desperate bid to reduce the alarming number of COVID-19 deaths among New York’s senior citizens. And while it likely saved many lives, some argue the strict policy may have cost some as well due to isolation.

Thousands of families like Antonacci’s were cut off from their loved ones for much of 2020 and even into 2021. They resorted to phone calls or visits through closed windows to stay in touch.

Annette Havens, a recreation therapist at Loretto, said the past year was a struggle.

Havens said staff at Loretto did its best to connect the residents with family members regularly by phone. Yet despite their best efforts, some were confused, and even upset, as to why their relatives were no longer visiting.

So, Loretto’s recreation therapists brainstormed and realized, given the constraints, that if residents were going to be separated from their loved ones for an indefinite period of time, it was not enough to hear their families; they needed to see them too.

The trouble was that each facility had a limited number of computers and handheld devices like iPads and many of the residents didn’t own smartphones or cellphones at all.

Between an investment from Loretto and a grant from the New York State Department of Health, the company purchased dozens of new iPads, enabling staff to connect families through video conferencing apps like Zoom, Skype, and Apple’s FaceTime. It was a bit of a learning curve at first, according to Havens (some residents kept pointing their cameras at the ceiling rather than their faces), but well worth the work.

“It was a lifesaver and a lifeline for our residents and their family members,” Havens said. “We would cry with families during these calls. The families would be like, ‘Oh we miss you. We wish we could hug you!’ And the residents would say ‘Oh it’s so good to see your face!’ It was very heartfelt.”

Brown said since her mother started Zooming, she has not missed a single call. She is perkier than when they talk on the phone and the little compliments about what they can see, like what Antonacci is wearing or how her hair looks, makes a dramatic difference. Although Antonacci jokes that she doesn’t always like to be on camera, these video-conferences “hit the spot.”

“My favorite part of Zooming is just seeing them all,” Antonacci said. “It’s like getting the family together, they talk among themselves too and communicate about things that are necessary for the whole family to understand, not just me.”

More than just reuniting family members, though, Havens said residents participated in events that they otherwise would have missed because of the pandemic or because of their travel limitations. Through video-conferencing, Loretto residents over the last year have been able to attend weddings, birthday parties, funerals, anniversary celebrations, travel with families on vacation and see newborn descendants.

This technology has opened new doors as well. Some residents now attend church by streaming it on these devices. St. Luke Health Services similarly added iPads in their senior residential facilities in Oswego. Director of Community Relations at St. Luke Greg Osetek said they have gotten creative with what these devices can offer.

“While the focus is keeping our residents and family members engaged, we’ve also been able to use these technologies for a whole host of other opportunities around keeping our residents active and engaged in our community,” Osetek said. “We regularly host exercise classes that are online, we have sponsored and hosted local entertainers who perform for us via Skype or Facebook. We have programs now where folks are doing virtual visits of various museums.”

As more people have become vaccinated and the number of cases of COVID-19 falls, family members are now, finally, able to visit their loved ones in long-term care facilities in New York. However, staff at Loretto and St. Luke think these iPads will not remain a relic of the pandemic. They anticipate making this investment in technology a permanent offering at their facilities given the wide range of activities that they enable. For example, Osetek said the iPads have made telehealth visits easier for their residents.

And many families, like Antonacci’s, say they have become accustomed to video-conferences. Brown said in-person visits with mom are still the priority in her family’s visitation system, but Zoom has now replaced phone calls as the backup.

Photo: Several senior facilities in Central New York, like St. Luke Health Services in Oswego, have used new technology to open their doors to family and friends. Shown is a Loretto resident during a virtual visitation.