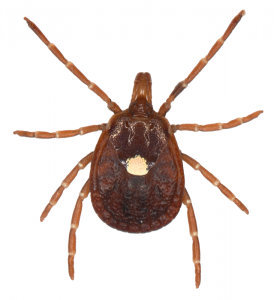 Ticks in Central New York recently launched an all-out assault. While nursing a particularly nasty bite, I couldn’t help but muse about tick-borne illnesses. One of the weirdest isn’t an infectious disease at all. It’s an allergy to red meat that develops after the bite of the lone star tick.

Sufferers develop gastrointestinal symptoms like nausea, vomiting and diarrhea; itching and hives; and sometimes anaphylaxis with symptoms like airway swelling, wheezing, and collapse.

It happens hours after eating a meal containing red meat. Affected individuals have IgE antibodies that react to a substance in red meat with the tongue-twisting name of galactose-alpha-1,3-galactose — alpha-gal for short.

Because the reaction occurs hours after eating non-primate mammalian meat, it’s not easy to make the connection for an individual patient. It’s caused by the bite of the lone star tick. The name stems not from the state of Texas (although it does occur in the eastern part of that state), but from the single silvery-white star found in the center of the adult female’s body. The lone star tick inhabits the eastern, southeastern, and midwestern U.S.

The allergy to red meat caused by this tick affects the consumption of non-primate mammalian meat — chiefly beef and pork. Affected people frequently have eaten meat for years before the symptoms start. They don’t need to have any special susceptibility to allergies, and need not have a prior history of allergies or asthma.

To make the diagnosis for sure requires allergy testing in the form of skin or blood tests. There isn’t a cure. The treatment is avoiding red meat and carrying an epinephrine auto injector (one brand is Epipen) for emergency treatment.

The exact mechanism by which the lone star tick causes he allergy isn’t known. It might be that the tick makes a substance in its saliva that cross reacts with alpha-gal, inducing the allergy. A second theory is that while feeding, the tick contaminates its human host with alpha-gal that it picked up when feasting on a previous meal. Or even from a meal eaten by its mother and handed down via the egg from which the tick grew. A third theory is that some as-yet undiscovered microorganism living within the tick is the actual culprit.

One fascinating aspect is the tale of how scientists made the connection between alpha-gal and meat allergy from tick bites.

In the early 2000s, scientists were testing a drug to treat colon cancer. A few people developed severe allergic reactions to the drug the very first time they received a infusion. That seemed odd. Usually prior exposure to a drug has to occur before an allergy develops. When they studied the blood of allergic patients, they found the antibody to alpha-gal. It was already known that alpha-gal is found in mammal meat.

But why were these people allergic to the cancer drug? At about the same time, patients turned up in increasing numbers with new red meat allergies. The people who reacted to the cancer drug and the people with meat allergies lived in the same geographic area. This location coincided with distribution of the lone star tick. On careful questioning, both groups of patients recalled tick bites. Eventually scientists connected the dots and confirmed that lone star tick bites were to blame.

So, be sure to tuck in your pants, consider treating your outdoor clothes with permethrin, and use insect repellant.