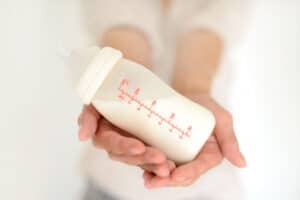 I begin this article intending to write about a futuristic idea to improve infant bottle feeding, to produce a substance more closely resembling mother’s milk. I’ll get there, but my reading led me down the internet rabbit hole to some fascinating facts about the history of infant feeding.

Breast feeding is the ideal, but sometimes it doesn’t work out. A mother may not produce enough milk. The baby may have difficulty latching on and suckling. Breast feeding could be too painful. The mother’s work schedule might preclude breast feeding. So, back into prehistory, mothers sought alternative ways to feed infants.

Before the introduction of artificial formula and safe baby bottles, wet nursing was common. That’s the practice of a woman breast-feeding another’s child. Records indicate it dates back at least 2000 years. In biblical times Pharaoh’s daughter hired a wet nurse to feed baby Moses.

Ancient medical remedies to treat lactation failure probably weren’t very effective, judging by this example from the Papyrus Ebers out of Egypt 1550 B.C.: “Warm the bones of a swordfish in oil and rub her [the mother’s] back with it. Or let the woman sit crosslegged and eat fragrant bread of soused durra while rubbing the parts with the poppy plant.” Durra is a type of grain, so I’m guessing that soused durra was soaked in alcohol.

The earliest use of wet nurses arose from necessity. As early as 950 B.C. in Greece, women of higher social status demanded wet nurses, apparently for status or convenience. Between 300 B.C. and 400 A.D. in the Roman Empire, written contracts were formed for wet nurses to feed abandoned infants. These were usually females thrown onto rubbish piles, and subsequently purchased by the wealthy as an inexpensive slave for future use.

Eventually doctors recommended that women nurse their own infants when possible, but wet nursing remained a popular, well-paid, highly organized profession during the Renaissance.

Bottle feeding, initially not as common as wet nursing, goes back to prehistoric times. 7000-year-old clay feeding vessels, often shaped like cute animals, contain remnants of animal milk from cows, sheep and goats. Other devices were made from wood, ceramics and cow horns.

One of the most common feeding bottles of the Middle Ages was a perforated cows horn. The “bubbly pot” invented in 1770 was similar to a small coffee pot with the neck arising from the bottom of the pot. The end of the spout formed a knob in the shape of a small heart with several small holes punched into it. A small rag, piece of linen, or sponge was tied over the holes for the infant to play with and suck milk through. In 16th through 18th century Europe, the pap boat was a device to feed infants pap (bread soaked in milk or water) or cereal cooked in broth.

This included a spoon with a hollow stem so that the food could be blown down the infant’s throat. This permitted caretakers to cram more food more quickly into an infant than breast feeding.

Glass bottles came into use in the early 1800s, evolving from elaborate affairs with cork nipples and ivory pins at air inlets, to the modern bottles used today. The first rubber nipples had a repulsive odor and taste. Early feeding bottles and devices could not be easily cleaned or sterilized, allowing bacterial buildup infecting and killing some infants.

Synthetic baby formulas began to be developed in the late 1800s. These formulas gradually improved in composition and ability to be sterilized and stored safely. But synthetic formula does not include all the bioactive cells, enzymes, and proteins found in mother’s milk.

Scientist Leila Strickland, a cell biologist, had difficulty breast feeding her children. She felt as if she spent all day every day either nursing or pumping to stimulate her milk flow and yet her children cried and seemed hungry.

While watching the unveiling the first laboratory grown hamburger, Strickland had an inspiration. Perhaps breast cells could be cultured to make human milk that could be fed to infants whose mothers couldn’t breast-feed.

After a number of years of research, starting with a cow udder she bought for $20 from a local slaughterhouse, she’s making progress toward that goal.

One of the difficulties is that breast milk changes in composition over time. The first few days mothers produce colostrum. This thick yellow concentrated milk is packed with compounds like antibody IGA and lactoferrin. That colostrum is soon replaced by transitional milk which is thinner with more fat and lactose (a milk sugar). And after about two weeks mother’s milk has what is considered a “mature” composition.

Other scientists are also trying new approaches to make better infant formula. A Singapore lab is working to synthetically produce proteins and carbohydrates to fortify current formulas. Another company plans to use microbes to synthesize milk proteins, carbohydrates, and fats to be recombined into an improved infant formula.