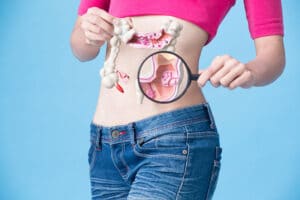 Recently a 35-year-old relative went to the emergency room for suspected appendicitis and wound up with a diagnosis of stage 4 colon cancer.

It turns out that colon cancer incidence in developed nations is rising rapidly in the young, those under age 50.

Since 1990, the rate has doubled in the young, while falling in older people due to screening colonoscopies and lower rates of smoking. The recommended age for screening colonoscopy has been lowered from 50 to 45. The age is even lower for those with certain risk factors.

What is behind this surge in colon cancer in the young?

Possible factors include diet, gut bacteria, inflammation and environmental chemicals. Most colon cancer in young adults appears to be due to environmental factors rather than genetics. Perhaps 10% – 20% of colon cancer in the young arises from inherited disorders such as Lynch syndrome or familial adenomatous polyposis.

Diets high in processed meat and sugar, and low in fruits and vegetables, appears to be associated with early onset colon cancer. A recent report suggests that high intake of sugar-sweetened beverages (soda, fruit drinks, sports drinks, and sweetened tea) in the teen years increases the risk of colon cancer. The study wasn’t perfect. It looked at women aged 25 to 42 and followed them over time. Women who reported drinking two or more sugary drinks per day at age 13-15 were more than twice as likely to be diagnosed with colon cancer at before age 50 compared to those who reported drinking less than one sugary drink per week. That’s one more adverse health effect of sugary drinks, along with obesity and diabetes.

Obesity, which is in part linked to diet, increases the risk of colon cancer. A poor diet alters the bacteria found in the intestines, which may influence colon cancer development. One study found that toxins produced by human gut bacteria could cause intestinal cancer in mice.

Diet also can trigger gut inflammation, which in turn can increase the risk of colon cancer. One study in mice found that a high-fat diet triggered gut inflammation which increased the growth of intestinal tumors. Gut bacteria can alter the immune cells in the intestine and promote tumor growth. Inflammation produces chemicals that can lead to DNA mutations and then to cancer. Many young adults with colon cancer have chronic illnesses associated with inflammation, such as Crohn’s disease, diabetes, or irritable bowel syndrome.

Environmental chemical exposure may also be behind the rise in colon cancer rates in the young. Many substances have been associated with increased cancer risk, from industrial pollutants to pesticides and more. Not all services that do pest control toronto use healthy pesticides. Environmental chemicals may act directly on the intestinal cells or may alter the gut bacteria.

It’s important to be aware of early symptoms of colon cancer. None of these should be ignored, no matter how young the patient. These include:

• A persistent change in bowel habits. This includes diarrhea, constipation or a change in stool consistency or diameter.

• Blood in the stool or rectal bleeding.

• A feeling of incomplete bowel emptying

Many people have no early warning signals, as in the case of my young relative. So, I hope that future research will uncover better ways to detect colon cancer in the young.