Until there’s a vaccine, avoiding contact with poison ivy is the best way to avoid the itch 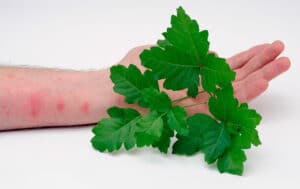 The rash itches severely, hurts and blisters. Untreated, it drags on for weeks. My husband, a forester, is ultra-careful to attempt to avoid poison ivy. He wears long sleeves and washes as soon as he exits the woods. He still manages to contract it almost every year. Ten percent of lost-time injuries for forest service employees are caused by poison ivy.

The culprit is an oily chemical called urushiol. Poison ivy and its many relatives in the genus toxidendron deposit it in their leaves and stems. The name toxidendron derives from the Greek toxicos (poison) plus dendron (tree.) The word urushiol comes from the Japanese word for lacquer tree, whose sap produces a hard, skin-irritating, lacquer.

To make matters worse, rising carbon dioxide levels from climate change induces the plants to make a more toxic variety of urushiol. Unlike many allergic skin reactions, the rash of poison ivy is not caused by the release of histamine chemicals. So, antihistamines like diphenhydramine (Benadryl), cetirizine (Zyrtec) and loratadine (Claritin) don’t help. Topical steroid creams like hydrocortisone are not particularly effective, either. Steroid pills relieve poison ivy but often have side effects and require prolonged use.

If histamine is not the culprit, how does poison ivy cause such misery? One itch-producing chemical is interleukin-33, or IL-33. In mice, blocking either IL-33 or its receptor resolves the itch. Poison ivy may be common but, in the great scheme of things, it’s not a top medical research priority. Because IL-33 plays a role in asthma and eczema, at least two drug companies are working on potential drugs to block it. A treatment for poison ivy could be a nice secondary bonus.

A second pathway contributing to the miserable itch of poison ivy involves release of chemicals from a type of immune cell called mast cells. This is another potential target for future poison ivy treatments.

How about a vaccine to prevent contracting poison ivy in the first place? Research on a chemical called PDC-APB is under way in humans. This synthetic version of the active portion of urushiol was developed at University of Mississippi. Injected every one to two years, it may reduce or eliminate reactions to poison ivy, oak and sumac. It’s been successful in pilot trials in guinea pigs.

In the meantime, learn to recognize the waxy green leaves, in groups of three, which turn crimson in the fall. Avoid them. Wear long sleeves if you are sensitive and likely to encounter poison ivy. Wash off immediately after returning inside. Soap is required to remove urushiol which is oily. Automotive grease hand cleaners work especially well.