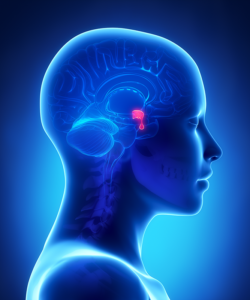 Whenever I see a patient with an unusual medical history, I like to learn about their diagnosis and treatment from the patient. Then I review and refresh my knowledge on the subject. A case of someone with a pituitary tumor prompted this article.

The pituitary is a tiny gland inside the skull, just below the brain and above the nasal passages. It sits in a bony depression called the sella turcica — Latin for “Turkish saddle.” Although Google indicates this type of saddle was used on horses, it looks a lot like a camel saddle some friends brought home as a souvenir from their Peace Corps travels in northern Africa. The optic nerve traveling between the eyes and the brain sits just above the pituitary.

The pituitary is sometimes called the master gland because it produces many hormones that control the production of hormones by other endocrine glands. The pituitary has two parts. The anterior section makes the following hormones:

Also called somatotropin. This promotes body growth. Too much during childhood, before the bone’s growth plates close leads to gigantism. Too much during adulthood, called acromegaly, causes the hands, feet and face to enlarge.

Also called corticotropin. This stimulates the adrenal glands to produce too much cortisol, a steroid hormone. This leads to rapid weight gain, high blood pressure and diabetes.

Too much can make both women and men produce milk and can affect fertility.

The posterior portion of the pituitary stores and releases hormones made in the adjacent brain region called the hypothalamus:

Also called antidiuretic hormone. This affects the ability of the kidney to concentrate urine and retain or excrete fluid. When ADH is too low, patients urinate too much and become dehydrated. This is called diabetes insipidus, a totally distinct condition from diabetes mellitus which raises the blood sugar.

• Oxytocin stimulates uterine contractions in childbirth and lactation after childbirth.

As you can see, the pituitary is a busy and complex gland!

Pituitary tumors are further classified by size. Microadenomas are less than 1 cm. (1/2 inch.) They rarely become large enough to damage adjacent structures but can cause trouble if they secrete any of the hormones described above. Microadenomas that stay small and don’t secrete hormones are often never found or are found only incidentally when a test like a brain MRI is done for some other reasons. Macroadenomas can cause symptoms by pressing on nearby structures and may produce excess hormones.

Depending on the symptoms caused by a pituitary tumor, evaluation will include blood work and imaging such as MRI. Treatment could include surgery, radiation or medication.

Pituitary tumors are actually very common, occurring in perhaps 10% -20% of people over their lifetime. But pituitary tumors that cause symptoms are far less common. I wasn’t able to find that figure.