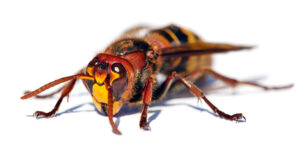 ‘Stay calm if a stinging insect is flying around because swatting may provoke it to sting. But if you are attacked by several stinging insects at once, run away. Go indoors if possible.’

Last month I attempted to combine two of my favorite hobbies, backpacking and geocaching.

For those unfamiliar with the game, geocaching is a kind of a location-based treasure hunt. I was in Alabama with a friend. Unfortunately, as I searched for the geocache, I stuck my hand into a tree stump housing a nest of tiny ants.

They swarmed over my hand. A batch of them stung me simultaneously.

That was sufficient to make me quickly withdraw my hand. I abandoned the hunt. I’m not an entomologist, but my friend claims they were harvester ants. She informed me that when threatened, one ant emits chemical pheromones that incite its neighbors to sting in unison. At least the burning, stinging pain only lasted a few hours.

An entomologist named Justin O. Schmidt spent his career studying stinging Hymenoptera, the insect group that includes wasps, bees, ants and sawflies. His interests include the biochemistry of stings. He devised a pain scale, rating sting pain severity from one to four. Pain level one includes the sweat bee. He describes it as “light, ephemeral, almost fruity. A tiny spark has singed a single hair on your arm.” Pain level four, the highest level, would be the bullet ant. Its description is “pure, intense, brilliant pain… Like walking over flaming charcoal with a 3-inch nail embedded in your heel.”

Pondering those stings leads to the question: Why do insects have painful or poisonous things in the first place?

Entomologists theorize that pain evolved first. Solitary insects could use painful stings to shock a predator into releasing the insect, enabling it to escape.

A single insect does not provide enough of a reward for the predator to pursue it. So solitary insects did not need to use their metabolic energy to also produce toxic venom. But as insects evolved into large colonies, pain alone wasn’t enough. The predator could drop the stinging individual and attack its associates. These social insects required something stronger, something poisonous, to deter predators and protect the entire colony. This led to the evolution of venom.

Fortunately, not every bee, wasp or ant is venomous. Recently I spent the night camping in a wooden lean-to that was home to many carpenter bees. These large bees make individual nests by boring into wood. Even though they are large and imposing-looking, they don’t sting or bother people. Hymenoptera perform many important ecological functions.  They pollinate plants and prey on other potentially troublesome insects.

Allegedly, stinging insects are particularly attracted to the scent of bananas so these should be avoided outdoors. Stay calm if a stinging insect is flying around because swatting may provoke it to sting. But if you are attacked by several stinging insects at once, run away. Go indoors if possible. Don’t jump into the water because some insects hover above the water and continue to sting when you come up for air. If a bee enters your car, don’t panic. Stop the car slowly and open all the windows. People allergic to insects should carry epinephrine and wear a medical alert bracelet.

If you are stung, wash the area with soap and water. Don’t squeeze the stinger or use tweezers. This can release more venom. Remove the stinger by wiping the area with gauze or scraping with a credit card. Apply ice to reduce swelling. If someone develops a severe allergic reaction, use their EpiPen if available, and call 911 for transport to an emergency room.