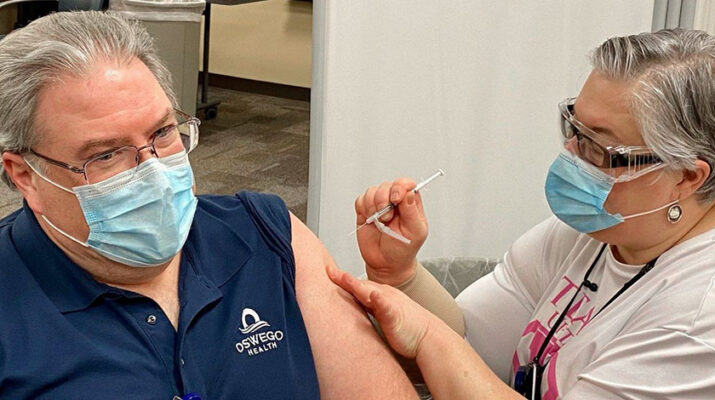 Separating the myths from facts about vaccines

In mid-December, the first 170,000 doses of the COVID-19 vaccines were ushered into the state of New York. Double that number came a week later.

Slowly every state has received its initial doses of the vaccine. Now, under the new Biden administration, there is a strong push for everyone to be vaccinated. Recently, the president said that by July everyone who wants to be vaccinated will be able to do so. There have been many questions and rumors about the vaccine as residents hope it is the first wave of good news when it comes to COVID-19 and the attempts to return to normalcy.

“The biggest myths are that the vaccine was rushed to market or is part of a political agenda. Neither is true,” said physician Duane Tull, chief medical officer at Oswego Health.

1. What was the process of the vaccination coming to market?

Some people may wonder if the vaccine was fast-tracked and created too soon. But experts say there is a reason why the vaccine came through in less time than others because COVID-19 had similar strains from Middle East respiratory syndrome (MERS) and Severe acute respiratory syndrome (SARS). The vaccines were built upon years of work in developing vaccines for similar viruses.

More than 70,000 people volunteered in clinical trials for two vaccines (Pfizer and Moderna) to see if they are safe and work to prevent COVID-19 illness. To date, the vaccines are 95% effective in preventing COVID-19 with no safety concerns.

“The vaccines are being offered under an emergency use authorization due to the severity of the disease. Both currently available viruses were expedited to help fight this disease. Both were tested fully, and we are assured that no compromise in scientific standards, the integrity of the review process, or safety was allowed,” said Tull.

In times of emergencies, the Federal Drug Administration can make potentially life-saving medications and vaccines available to the public, Tull said. Medical officials believe people should know that these vaccines have been fully evaluated for safety and effectiveness just as they would have been for full approval. The emergency use authorizations permits the FDA to allow the use of an effective drug rapidly during an emergency as long as the earlier release is balanced by the benefits gained.

During the initial roll out and during the beginning of the year, federal elected officials, health care workers, those working in nursing homes and senior citizens were prioritized with the vaccine. The COVID-19 vaccine will be distributed in phases to groups of people at increased risk of exposure or severe illness. Phased distribution will take time, with vaccines not expected to be widely available to all New Yorkers until mid-2021. The different phases of COVID-19 vaccine distribution are determined by New York state and may change. The federal government determines how much vaccine New York state receives. The federal government has given New York about 300,000 vaccines per week for more than seven million people who are eligible, as a result supply is very limited.

3. Should you get the vaccine?

There are people on either side of the vaccine who are either highly excited and plan to receive it right away and others who are skeptical and may take a wait and see approach. “Except for patients with known allergies to vaccines, I would recommend all people get the vaccine once it is available. The vaccine should limit the chances of getting the virus and at worst case should reduce the severity of the illness if you still do catch the virus,” said Tull.

4. Have there been any side effects?

There is no COVID-19 in the vaccines and there are no serious side effects. But a few common occurrences have happened in people.

“Most frequent side effects are related to the injection itself such as a sore arm or a vague feeling of illness. This is reported to be short-lived lasting only a day or so,” said Tull.

5. Are there any people who should consider waiting on getting the vaccine?

Tull said the major myth to dispel is that the vaccines were not properly tested and inappropriately rushed to market.  He would encourage everyone to consider getting one of the vaccines. All of them have similar results and mechanisms such that the only real difference is who manufactured them.

“There is only one medical reason to not get the vaccine and that is a true anaphylaxis history to other vaccines,” said Tull. “The vaccine has been reported safe in pregnancy, the immunocompromised patient, for all ages older than 16 and even patients who have had prior COVID infections. The vaccines are the only way to offer extended immunity for yourself and to help us establish a herd immunity to once and for all end this pandemic.”

Photo: Physician Duane Tull, chief medical officer at Oswego Health. “The biggest myths are that the vaccine was rushed to market or is part of a political agenda. Neither is true.”