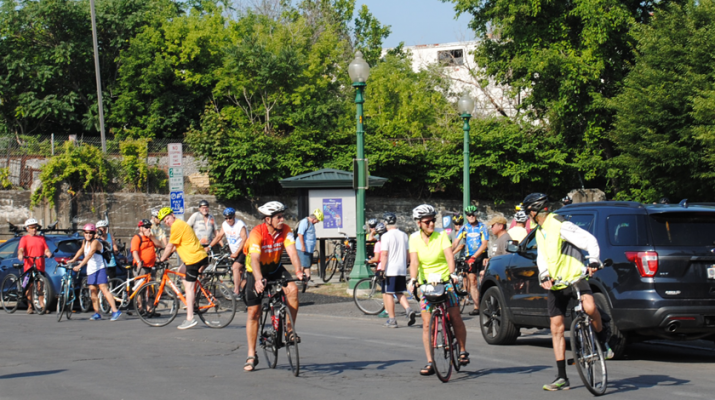 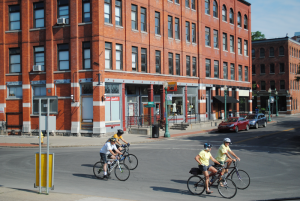 It’s about 8:45 on a Sunday morning in downtown Syracuse’s Armory Square area. While most people in this neighborhood might just be waking up, there’s a little area  — at the Onondaga Creekwalk trailhead on Jefferson Street, behind the MOST — filled with people who are already wide awake.

About 30 cyclists on traditional and electric bikes are gathered there, gearing up for the Cycle in the City bike ride, which takes place on the second Sunday of the month, from May to October.

The event, which is a free and guided bike ride through Syracuse, began in 2011 as an initiative between Onondaga County, the City of Syracuse Department of Parks and Recreation, Syracuse Metropolitan Transportation Council and some members of local bike clubs.

The riders can choose between a short ride, about 10 miles, or a longer ride, which is about 20 miles.

John Allen leads the longer ride, although he laughingly admits that being 78 years of age and on a hybrid bike, sometimes the other riders pass him on the hills. He also puts together most of the routes through the season. Bob Dougherty, another local bike enthusiast, leads the shorter ride.

“I try and move it around through the city, since it’s ‘Cycle in the City,’” he said.

The July ride took cyclists along the outer edges of the Syracuse University area before moving over into Eastwood. While there are inevitably some hills, organizers say that the riders are allowed to walk their bikes up those inclines. And there’s always someone or a “sag wagon” at the end the route, so no one is left behind.

Barb Smorol joined in the ride during its second year.

A native of Camillus, she said she never saw much of the city growing up. This allows her to see different areas of the city and some of the changes being made, along with getting some exercise, she said.

“It gets me out early in the morning,” she said. “It’s a fun way to see the city from a different perspective than just buzzing by in your car.” 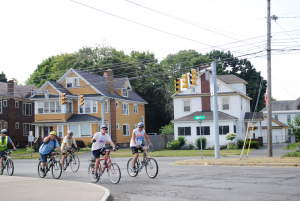 The ride was developed seven years ago, as a new and different way to introduce physical activity, according to Kathy Mogle, program coordinator with the Onondaga County Health Department, one of the partners in Cycle in the City. At the time, too, Mogle said, they were working with the city to adopt a complete street policy, showing a real need for bike lanes and trails and to raise awareness.

Since it started, the city does have a complete street policy, but it’s a “never-ending challenge to encourage people to become and stay physically active,” she said. This ride is pedaling in the right direction, according to Mogle.

Allen noted that riders know that they can finish 10 miles. Mogle encouraged them to get a good night’s sleep; eat breakfast, including a carb or two; bring a helmet and water; and ride at their own pace.

“Don’t be afraid because you don’t think you have the ability,” Smorol said. “I was a little nervous about keeping up with everybody. But they wait for you.”

The routes will vary, and maps for each ride are posted on the Cycle in the City website during the week leading up to that ride: https://healthyliving.ongov.net/2016/04/25/cycle-in-the-city/.

Cycle in the City Bike Ride

Cycle in the City, which started in May, will hold three more events this season. The remaining rides will be Aug. 12; Sept. 9. and Oct. 14. They are free of charge and bikers are welcome to join. All Cycle in the City rides begin and end at  Onondaga Creekwalk trailhead on Jefferson Street (behind MOST in the Armory Square area) with a start time of 9 a.m. and they last about an hour.