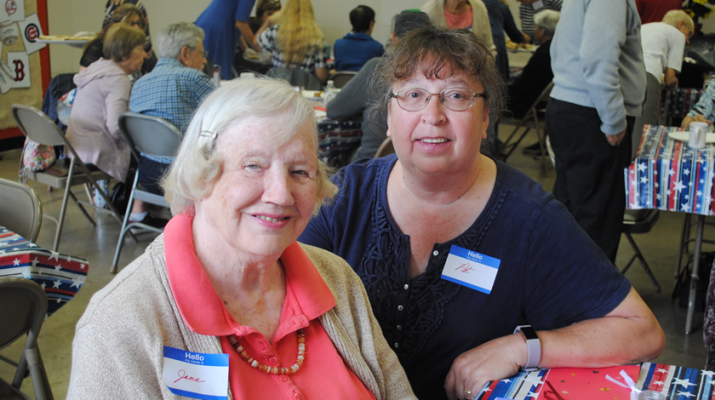 Syracuse Memory Café in DeWitt gathers 30 to 40 people each month. They come for socialization, relaxation

It’s late morning on the second Wednesday of the month and the hall on the lower level of the Pebble Hill Presbyterian Church is set up with chairs situated around brightly covered tables. On the tables are boxes of Cracker Jacks and songbooks. A volunteer is playing some “golden Oldies” on the piano, and a couple of other volunteers are at the doors of the Syracuse Memory Café, welcoming guests with memory changes and their caregivers to the monthly program.

On this particular morning, local magicians, The Jackman Twins, are meandering among the tables, showing off some of their magic tricks to the guests.

The Syracuse Memory Café is especially designed for those with memory changes, like dementia and Alzheimer’s, and their caregivers to provide them with 90 minutes of relaxation, entertainment, a light lunch and, most of all, the opportunity for socialization.

The café opens at 10:30 a.m. and is free. No reservations are required. It is located next the church’s parking lot, with a sloping walkway to the front door, allowing for easy accessibility.

“The Syracuse Memory Café is purely a social time at a time when many social connections are severed because the caregiver is overwhelmed with what they’re going through, it’s difficult to get the individual out or people don’t know how to interact with someone with memory changes,” said Tim Frazee, café organizer.

The local project has been running since January 2017, by a ministry out of the Pebble Hill Presbyterian Church on Jamesville Road in Dewitt. The church had a capital campaign a few years ago, Frazee said, and 10 percent of that was tithed, according to Frazee.

“We wanted to do something significant. We reached out into the community, and after some research and talking, this is what we came up with,” Frazee said.

The group, Frazee continued, had decided they wanted to do a program that was centered around the senior population or was health-related. Then, one of the members who had been in Colorado at the time, sent an email about a memory café he had read about. The ministry began doing some research and learned that these memory cafes had begun in The Netherlands, had spread throughout Europe and currently there are several hundred in the United States.

They also learned of a memory café in Cortland at the time, so the two groups met several times. “We then went down and visited their café and we all looked at each other and said, ‘this is us. We can do this. We want to do this,’” Frazee said.

The Cortland program no longer exists, so the café in Dewitt is the only one of its kind in Central New York.

One of the crucial aspects of the café program is its focus not only on the individual with the memory change but his or her caregiver, as well.

“Most people in general, when they think of an individual with Alzheimer’s or any form of dementia, immediately think of that individual with the memory changes,” Frazee said. “We learn very quickly that something like this is as important to the caregivers as it is to the individual with the memory changes. This allows the two of them to get out and socialize, interact with each other in a way that they used to and get them out of their dementia-centric home. And enjoy each other’s company in a different environment.”

The socialization that the café provides is key for Bob Poorman, who has been bringing his bride of 66 years, Joan, to the café for the past nine months.

“You get to talk to other people,” Poorman said. And sitting at one of the tables in the first row, the couple would soon be participating in the magic act that morning. At the conclusion of the show, when one of the Jackman Twins literally pulled a rabbit out of his hat, he set it down in front of Joan to pet for a few moments.

Jane Friedel and her aide, Pat Weaver, are relative newcomers to the café, having visited about four times.

“It gives her some entertainment, gets her out of the house,” Weaver said. “She takes part in the singing. She loves it.”

Another key to the success of the café is the corps of volunteers: it has more than 20, all members of the Pebble Hill Presbyterian Church, who interact with the guests, join them in the sing-alongs, and prepare and serve the luncheon treats.

One of those volunteers is Nancy Stewart, who’s been involved for about a year.

“I believe in the purpose of it, which is to bring connections for people,” she said. “It’s a tremendous group to work with. Everybody does their part here. It’s a completely compatible group of people doing it.”

Currently, the café serves between 30 and 40 people each month, and can accommodate more guests, Frazee said.

He also noted that they would like to help develop other cafes in Central New York.

“Growth is going to come from fostering other cafes. People told us very quickly we need to do this more than once a month, which is a challenge. Our goal right now is to foster other cafes in other locations throughout the Syracuse area so we can have one every week,” he said.

For more information on the Syracuse Memory Café, visit www.syracusememorycafe.com or call 315- 446-0960.